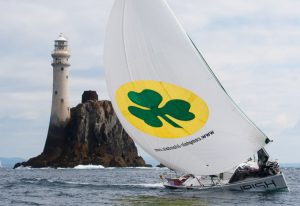 SCORA, in association with the National Yacht Club and the Royal Cork Yacht Club, are delighted to announce a pop up race from Dun Laoghaire to Cork Harbour via the Fastnet Rock.

The IRC race will start in Dun Laoghaire on Saturday 22nd August 2020 and pass the Muglin, Tuscar, Conningbeg and Fastnet lighthouses to Starboard before returning to Cork Harbour and passing the Cork Buoy to Port, finishing when Roches’s Point bears due East. The course is specifically designed to be of sufficient length to qualify skippers and crew for the RORC Fastnet Race 2021.

The clubs have combined forces to mark their anniversary celebrations, it being the 150th anniversary of the National Yacht Club and 300th (Tricentenary) of the Royal Cork Yacht Club. Competing boats are invited to take part in the Tricentenary At Home Regatta of the Royal Cork Yacht Club which sees racing for IRC classes from the 28th – 30th August and will be one of the highlights of the clubs celebrations.

The race will be governed by the COVID-19 guidelines as laid out by Irish Sailing and organising clubs.

Health Declaration For All Sailors

Royal Cork Yacht Club is inviting you to a scheduled Zoom meeting.