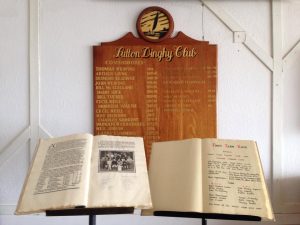 The Book (senior version from 1944) and the junior (from 1980) on display at Sutton Dinghy Club for Sunday’s 70th Anniversary series. Photo: W M Nixon

Referred to as the ‘Book Trophy’ in Sutton, the ‘Sutton Book’ in Cork and ‘The Book Of Kells for Irish sailing’ by W M Nixon, this historical event will take place in Crosshaven on September 4th 2021. First started by International 12 sailors in 1944, what made this inter club event special was the large vellum book with the pages blank and awaiting inscription. Tradition has it that the winning club documents the days racing and social events in the book. The continuing existence of The Book has been so central to a golden thread of sailing in Crosshaven and Sutton that those who have been involved tend to assume that everyone else knows all about it.

The Royal Cork will welcome Sutton to Crosshaven this year where they will compete in the new Irish Sailing fireflies which the Royal Cork have on lease for two years. The sailors will have the benefit of storm sails should conditions get fresh. 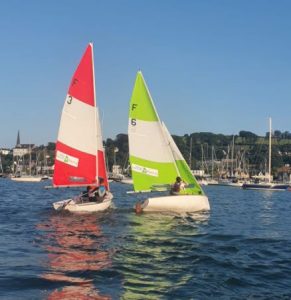 Irish Sailing’s fireflies came to Cork in July for a two year period and will be used to promote team racing on the South Coast and across Ireland.

Racing will be a best of 7(first to 4), 3 v 3 team racing event and will be sailed under the Racing Rules Of Sailing including Appendix D, Team Racing Rules.

The junior team will race first at 15:30hrs and the senior team will then race on completion of the junior series. With high tide in the river at 16:40hrs, racing will take place in the river if conditions allow, otherwise racing will take place on the Curlane Bank. As is customary, refreshments will be served in the club after the event and we hope to be joined by some past legends of the event.

Andy Johnston is team manager for Sutton Dinghy Club this year and Alex Barry on behalf of the Royal Cork. 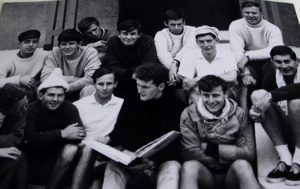 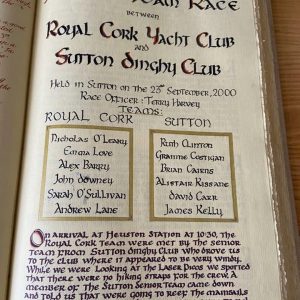 The junior book first started in 1980, the detail and calligraphy makes it clear why W M Nixon refers to it as the Irish Book Of Kells