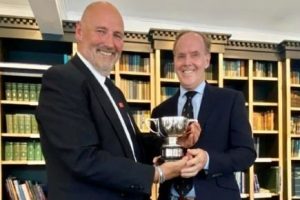 By Communications on September 22, 2022 in Cruisers, Latest, Yacht Cruising

As part of their Grand Tour of the West Country and Ireland, the Royal Thames Yacht Club Cumberland Fleet visited the RCYC on 2-4 August 2022. During their visit the RTYC hosted a splendid diner in our newly refurbished Members Top Deck Room where we were able to use the two decanters that were presented to the club by the RTYC for our 250th anniversary. 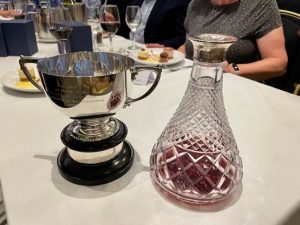 The Challenge Cup, presented to the Royal Cork by Tom Partridge of the Royal Thames, sitting alongside the decanter presented to mark the 250th anniversary of the club

During the dinner, Tom Partridge, RTYC Captain of Cruising, expressed the RTYC’s disappointment at COVID preventing their members coming to celebrate the first inauguration of the Royal Cork Yacht Club three hundred years ago. Tom also conveyed the RTYC Vice Commodore, Tony Hanna’s, apologies for not being able to attend the evening’s dinner in person due to unavoidable RTYC commitments and his best wishes and recognition of our two clubs somewhat unique longevity and heritage. On behalf of the Vice Commodore, Tom presented to the RCYC the Royal Thames Challenge Cup, in recognition of our Tricentenary which was graciously accepted by Rear Admiral Cruising, Mike Rider, on behalf of the club. This trophy will now be awarded annually to the member who submits the best Cruising Log.

The focus of the RTYC is now on 2025 and beyond where they will be celebrating their 250 years of existence.  The RTYC Vice Commodore hopes that many of our members will be able to travel to the UK to participate in some of the 250 year celebratory events be they Team Racing for the Cumberland Cup or at their Invitational Regatta in the Solent.