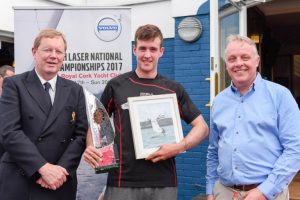 By Annamarie Fegan on August 20, 2017 in Junior Sailing, Lasers, Latest

A shroud of mist covered the dinghy park this morning but competitors were prompt with their rigging and launched at 0930 hours.  The local sea scouts assisted with the launching process and their stellar work during the week cannot be praised enough.  Club volunteers arrived with smiling faces, despite the day four tiredness – thank you all.  The fleets headed to the Cuskinny race area where PRO Peter Crowley commenced racing for the Standards at 1110 hours.

The mist developed into rain producing a lighter breeze of 10-13 knots from the South east.  Race 9 saw a change in the names on the top of the race score sheets as the lighter breeze was favoured by some of the sailors. In standards – Liam Glynn secured another bullet, Johnny Durcan finding his feet in the standard rig scored second and Finn Lynch 3rd.

In Radials club member Paddy Cunnane racing under the Dingle burgee collected his first bullet of the series and in 4.7’s Tom Higgins got bullet number four, followed by Cathal O’Regan and Michéal O’Suilleabhain. The margins started to draw closer on the series points but the overnight leaders still remained at the top of the fleets.

With the wind dying during race 10 the Standards were the first fleet to finish and head for home. The final race win gave Finn Lynch a nice series score of 10, 7 points ahead of Liam Glynn.  The PRO shortened the course for the 4.7 Fleet and Clare Gorman of the National Yacht Club scored her first bullet but it was not enough to knock Jack Fahy off the top position.   The Radials unfortunately had their race 10 abandoned and were sent for home with Luke McGrath as Radial National Champion. A big thank you to Peter Crowley and his Race Management Team who got 10 races completed over the past four days in challenging conditions.

The prize giving commenced at 1630 hours with a raffle of a sail for each fleet sponsored by CH Marine and the lucky winners were Cathal O’Regan, Ewan Briggs and Eoin Delap.  The winner of the 3 arena tickets sponsored by Johnson & Perrott, Mahon Point was Ben Hogan.  Congrats to all the winners.

Nick Walsh, Event Chairman thanked all the competitors, sponsors, volunteers, Club members, Club staff and Laser Class Captain Annamarie Fegan for all their work in making the event such a success.  He thanked Stephen, Pierce and Nick Bendon of CH Marine but paid special mention to Stephen, who worked tirelessly over the past four days assisting sailors with breakages and repairs to damaged gear which were plentiful given the weather conditions. Stephen O’Shaughnessy, Rear Admiral Dinghies reiterated Nick’s words of thanks and paid special mention to the sponsors without who the event could not be run so effectively.  Mark Whitaker of Johnson & Perrott thanked Nick for the opportunity to sponsor the event and the parents of the young competitors for bringing them to Cork to race.  He outlined Volvo’s continuing support of Irish Sailing with the recent announcement of the Volvo Junior Squad Programme.

Nick Walsh then made a presentation to Ron Hutchieson, Hon Secretary of the Irish Laser Class Association as he stands down after nearly 40 years of service to the class.  Ron received a standing ovation from all present. Nick then went on to thank Finn Lynch and Liam Glynn for attending the event and racing against the sailors here at home given their current training/regatta schedules. He said it was important for the younger sailors to get the opportunity to see top sailors in the class perform on local waters.

Results are available here and prizegiving photos are in the Bateman Gallery.  Bob Bateman Day 4 report and photos here.