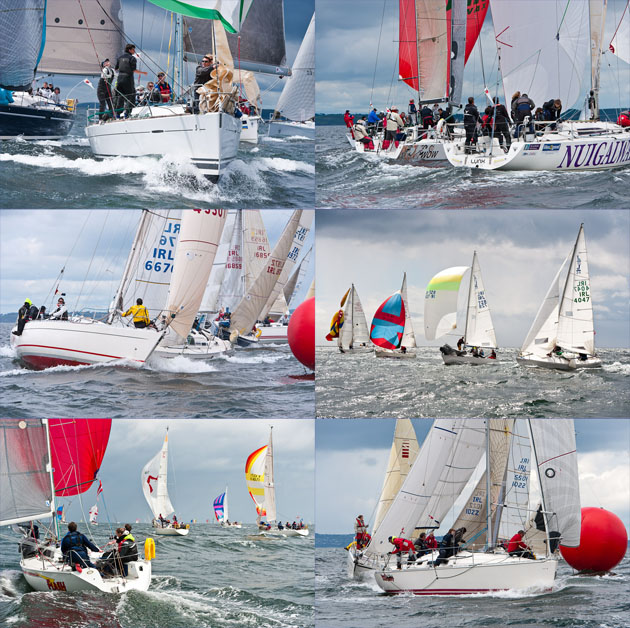 Some snippets from the race course. Picture Robert Bateman

This morning turned out to be very similar in conditions to Monday with a light variable north west breeze and by the time of the interval between races one and two of the day the wind was down to 5 knots at 310 degrees and the glamour end of the fleet was seen to be trying out their lightest spinnakers.  However, all changed, utterly changed as the Class Zero fleet rounded the weather mark and the light weather spinnakers quickly vanished to be replaced either by regular spinnakers or even Code Zero Gennikers. For the next hour or so great racing was enjoyed with much shouting and gesticulating at the marks and strange language as if from the tower of Babel was to be heard!  Of course there was a reason for all this and apart from the closeness of the competition, the  like of the diminutive 1720s, if you are at the same mark as the 46 ft Tonnerre, would certainly be in a  different size  bracket making it a case of little and large.

Today saw Tonnerre de Breskens notching up two more wins and now leading in IRC Zero. They were followed on the water by Jamie McWilliam’s Peninsula Signal 8 but this did not reflect in the results which saw Mike Bartholomew’s Tokoloshe move up to second place and dropping Kieran Twomey’s Gloves Off to third.

Next it was off to see the end of the racing on the trapezoid course and we were just in time to see Class Three and Four disappear downwind ahead  and the arrival of the ‘Ladies and Gentlemen’ of the White Sail fleet who had suffered the indignity of a general recall on their first start followed by a start under a black flag on the second. Indeed there was no shortage of shouting here either as one local boat, who shall be nameless, attempted to approach the weather mark on port in the face of an onrush of larger boats sailing downwind and bellowing starboard in the most strident tones.  At this point a heavy thunder shower was poured on the fleets by Thor the Norse God of thunder who decided to show what he thought of it all and by this point my researcher had endured enough and headed for home!