By Bob Bateman on August 5, 2013 in Uncategorized 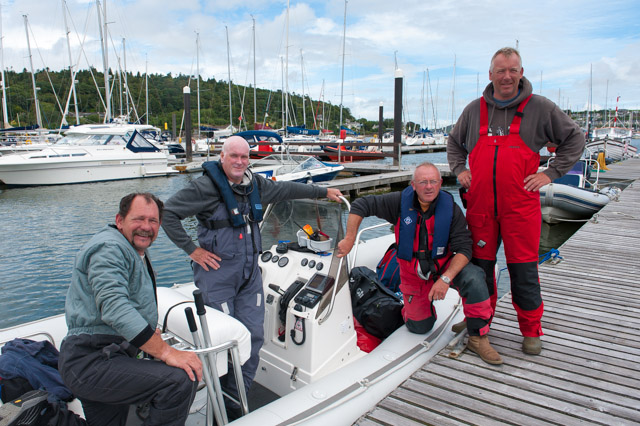 Two of the bigger entries had arrived safely on Friday having braved the elements  to get back owing to commitments at home in the UK.  The final group of some sixteen Ribbers with some boats as small as 4.8m  had met ferocious weather conditions, including twisters, that necessitated some of them returning to Fenit for shelter and others remaining in Dingle until the weather abated enough to let the flotilla get under way again.   This they did yesterday (Mon) morning setting out at 6 am  arriving in Crosshaven between 13.00 and16.00 hrs depending on their size.

The Sligo Yacht Club entry, Derek Shaw’s Nyzod, made it in good time and for one of the crew, Paul Leyden, it was somewhat of a nostalgic journey as he had raced in a GP 14 Championship in the Royal Cork some twenty years ago and it was quite something for him to visit the club again for the first time since then.

The event officially started in Kilmore Quay and circumnavigated Ireland anti clockwise in a series of eight stages.  They were unfortunate to be met with such  conditions which were not expected and, therefore, threw their schedule into disarray.  However, it was most satisfying for them to have completed the journey around Ireland.