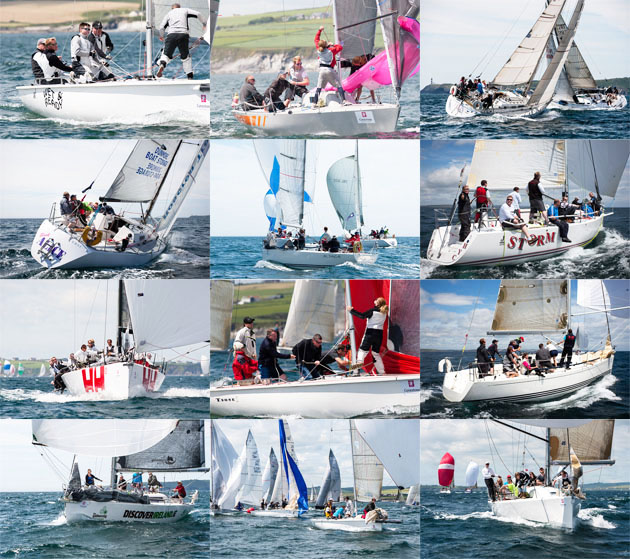 With sunshine and  summer breezes in Kinsale so far in the Covestone Asset Management Sovereign’s Cup in Kinsale, the crews and organisers can count themselves blessed with most of the rest of the country enduring drizzle and foggy conditions.  While some might have wished  for more breeze, nonetheless no complaints have been heard, only what a good time is being had by all skippers and their crews particularly when it comes to the mid event prizegiving which can be enjoyed in the lovely evening sunshine outside the new clubhouse.

The RCYC/BSC O’Leary Clan, Dad Anthony and sons Peter, Nin and Robert with Mum Sally supporting  from the sideline on Irish Mist, continue to weave their way to the top of the 1720 European Championships table with six of the scheduled races completed.  Nicholas, helming T-Bone, enjoyed a second and two firsts in today’s racing.  T-Bone now enjoys a six point lead over Spiced Beef, which had Olympian brother Peter helming and youngest brother Robert also on board, when all the 172os and quarter tonners found today’s shifty wind in Bullen Bay less to their taste.  Baltimore based Ben Cooke on Smile and Wave continues in third, just one point adrift, while  the wily Anthony O’Leary, bides his time in fourth awaiting the opportunity to catch his sons in the remaining races.  The Cork born 1720 class  illustrates a pinnacle of great team work racing.  Each sailor on board be they helm or crew has a specific vital function and for an event such as the European Championships they all mix and match and learn from one another and that is what makes this such a great class.

Classes 2 and 3 were sailing on the windward/leeward course today. The Race Officer was Alan Crosbie who had an 11.55am scheduled F.G.  He was somewhat stymied by a wind that couldn’t make up its mind which direction to take and it took several attempts at resetting the course to get a true beat.  Eventually all was set and while he did  his best to coax the fleet into not being too impatient he still had to signal a general recall.  He continued to coax and cajole the bucking broncos  until he finally got his desired start.  First to tack and head for the shore was Bad Company and Leonard Donnery helming Cavatina, who is enjoying a brilliant event, was also going very well but it is the  wise veteran Shane Stathem from WHSC has a five point lead in this fleet.

Having got the Class 2 fleet away Class 3 were exhortd by the Race Officer that “it was a nice day and a lovely day for sailing and not to be over eager”  They had a long line  and despite the small fleet they still managed to have a general recall.  KYC’s John Twomey continued to dominate in his Blazer 23 Shillelagh, with a further two wins today to go with the two from yesterday.  Twomey’s results are underscored by the fact that he has the lowest handicapped boat in the fleet, but consistently maintains a significant on the water lead in each race.  Jaws, Seachange, Now and Bandit lie in second and third place respectively.

The Class 0 and 1 fleet enjoyed a very long day at sea today on the round-the-cans course which gave all boats a chance to stretch themselves in the glorious conditions.  In the first race of the morning, Andy William’s Ker 40 Keronimo was across the line early, and had to dip back before resuming the race, scorching her way through the fleet before surfing into an on the water lead downwind while clocking in excess of 20 knots.  The “Z” flag had to be unfurled by PRO Jack Roy for the second race after a general recall.  Keronimo leads overall in Class 0 IRC, but is tied on points with Kieran Twomey’s Gloves Off, which continued her good form today.  Murray Finlay’s XP38i Roxstar lies a little adrift in third overall.  Richard Fildes’campaign on his Corby 37 Impetuous suffered a serious setback today after they were Z-flagged in the second race of the day apparently dropping her out of contention until the discard comes into play.

In Class 1 IRC, John Maybury’s Joker 2, has established herself as the boat to beat, not having been outside the top three to date, and a win in today’s second race.  Local KYC boat David Scott’s EOS lies in second place overall after taking the lead from Joker 2 by two seconds in the first race today.  The A35 Fool’s Gold of Rob McConnell lies in third overall but, with just eight points separating second and sixth places and amid reports of very competitive racing where minute margins are making significant differences,  no one is calling this class yet.

At this stage ones thoughts turn to the beautiful Michelle Dunne Prix d’Elegance Trophy and who will be adjudged the worthy winner of  this beautiful piece in Michelle’s memory.  Lets hope this time around the significance of this trophy will be explained to the lucky winner and assembled competitors at the prizegiving so he/she and crew will truly appreciate the emotive story and the honour of receiving the beautifully crafted piece presented by the Dunne family in Michelle’s memory.

Sunshine and Light Winds for Day one of Sovereign’s Cup
Not for the faint hearted at Kinsale!!