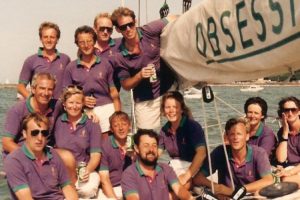 Our April Calendar picture is of the start of a One Ton Cup race in 1981. The club has a great history of hosting major international events and here we look at a few world class championships from the 1980s…. 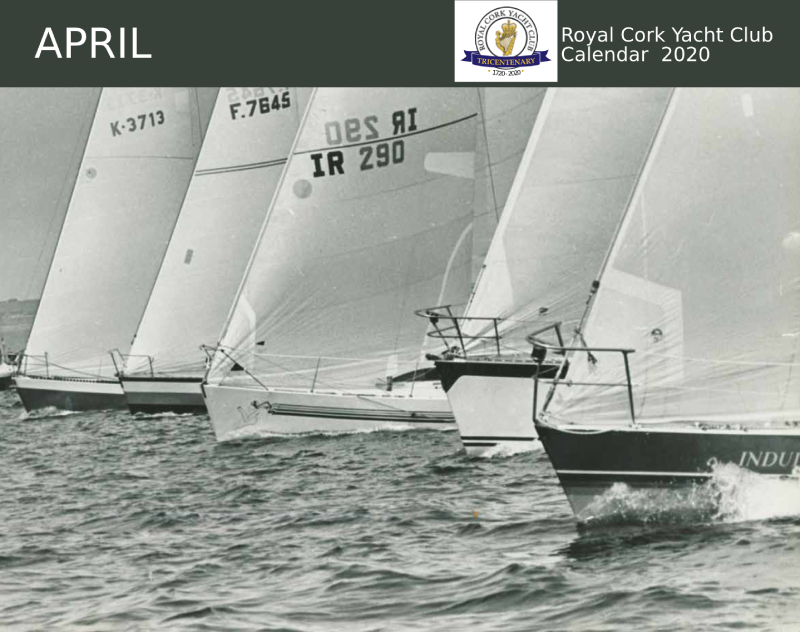 This photo has hung in the club’s reception for many years. There are only five bows visible – where the other eleven boats are we can’t see. The center bow is Justine III, sailed by our own Harold Cudmore and the ultimate winner of the 1981 One Ton Cup

We struggled to get other good sailing shots of the event but at least we have proof that there were more boats! 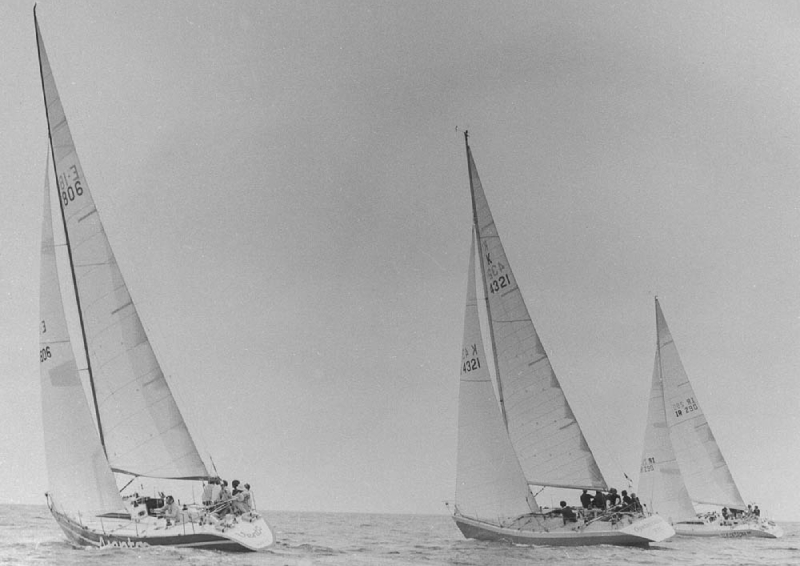 Racing then was under the IOR rating system, a complex formula that produced a wide variety of boat designs. The One Tonners were typically about 36′ long – here the middle boat, Oystercatcher, is a Stephen Jones design which by some rule bending came in at 41′. To weather is the Tony Castro designed Justine III, and to leeward is the previous winner, Vento, a Ron Holland design that club member John Rohan chartered and came 2nd on this occasion. 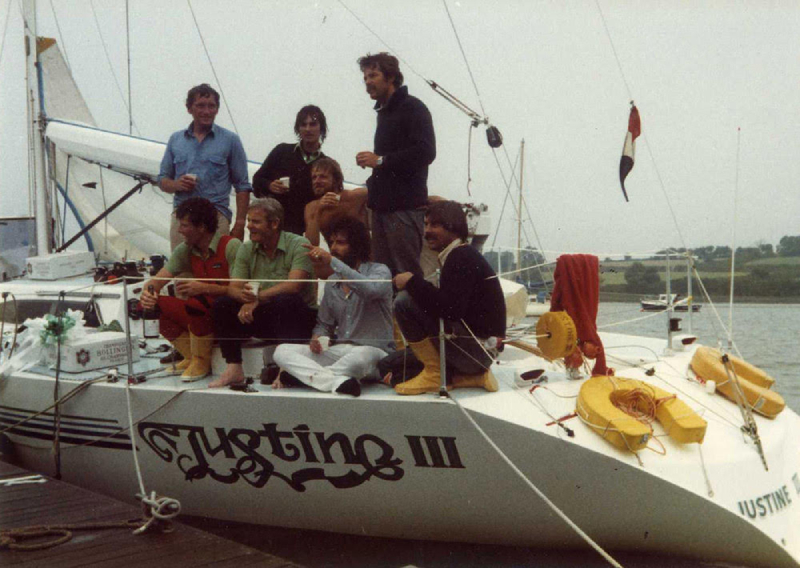 Killian Bushe had built Justine for Frank Woods of the National Yacht Club. One of your WbW team remembers being the junior on the IOR safety check duties the weekend before the start and visiting Justine with the checklist. Lifebuoys, check, flares, check, softplugs, check, toilet, “eh” says Killian “it’s there” pointing at a largish unopened cardboard box! To this date we are unsure if the rule just said you must have a toilet on board. In the pic are: front – Harold Cudmore, Frank Woods, Tony Castro and Michael Meader; behind – Dave Gay, Killian Bushe, Joe Richards, Joe English. 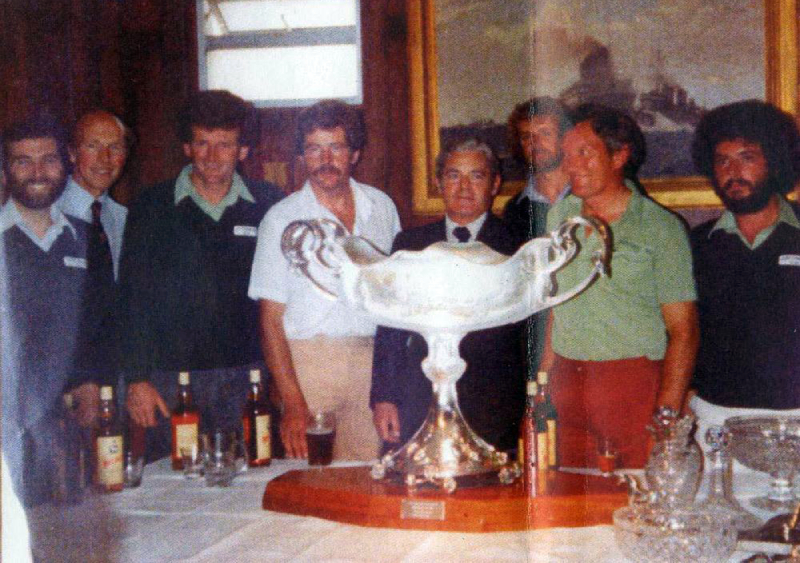 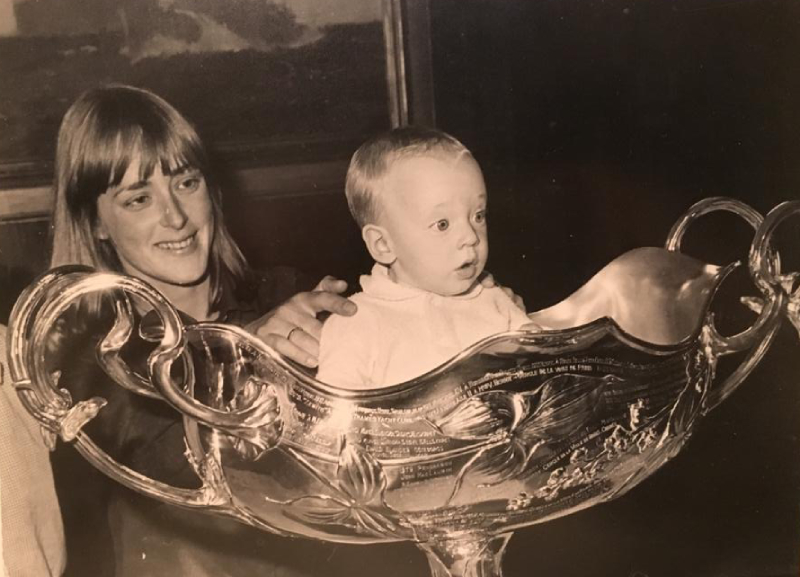 It made a very comfortable cot for Lucy Gibson with proud mum Sue keeping things upright. Lucy’s dad Dick worked with John McWilliam at that time. 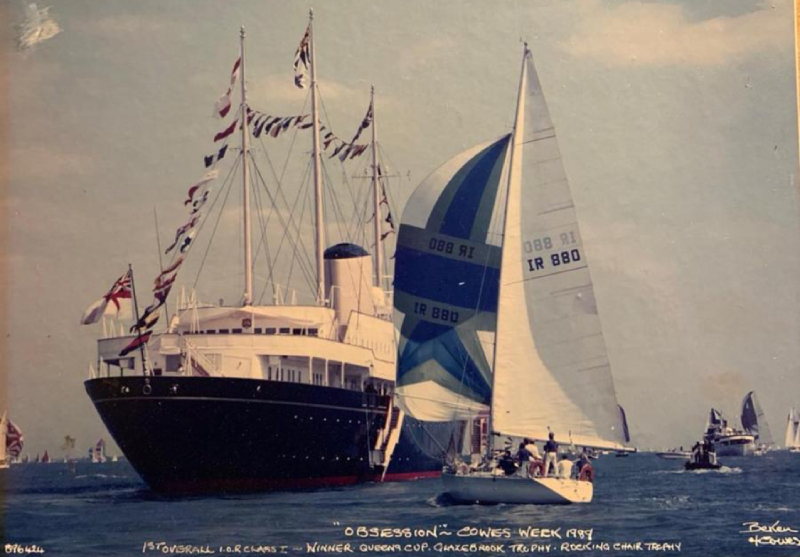 One nice legacy of that event was that the boat who came 4th, the Ed Dubois designed Snowball, spent most of the 1980’s in Cork Harbour as Obsession. Here she is on her very successful raid in 1989 when Barry Rose and his team took Class 1 and the Queens Cup at Cowes Week….. 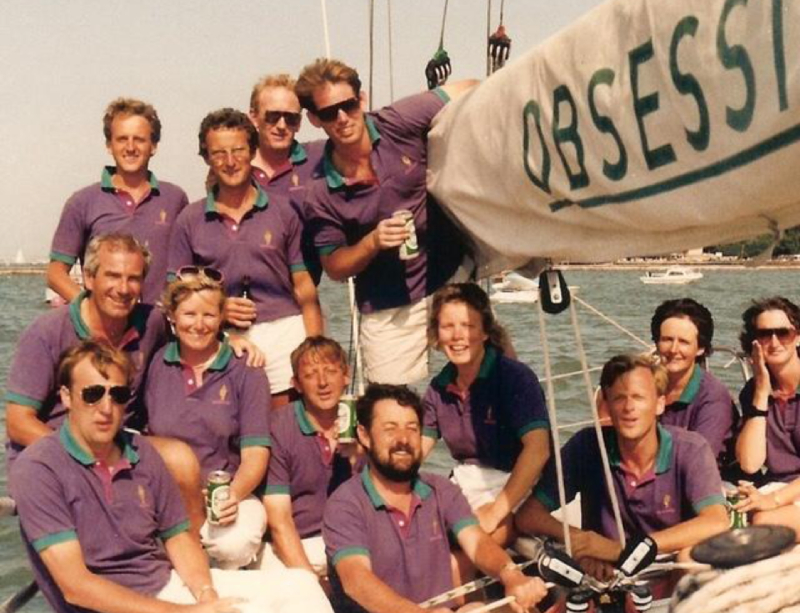 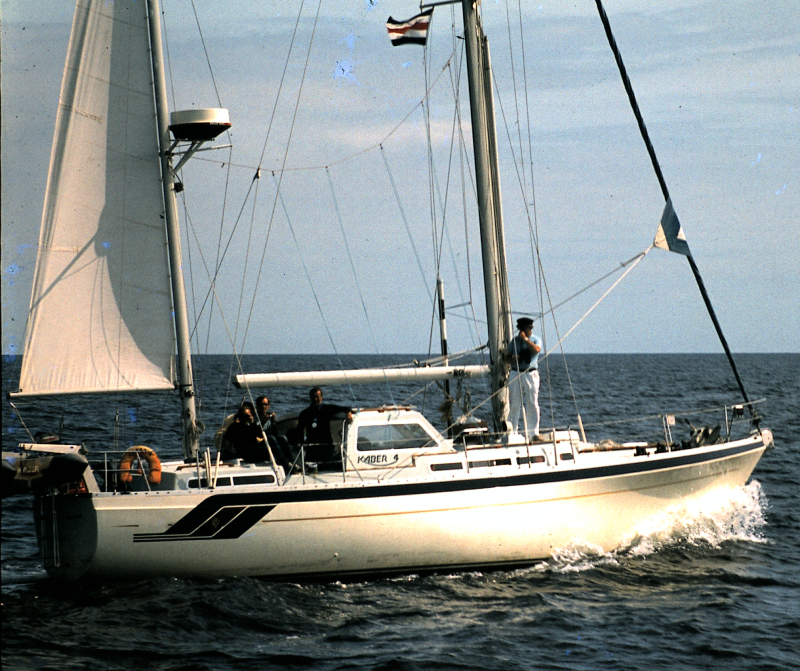 As mentioned in the introduction, the One Ton Cup was one of quite a number of world championships at Crosshaven during the ’80s. Clayton Love Jnr. was Race Officer for three of those and here he is on Bernie Cahill’s Kaber 4 in 1981 where, as we saw in the calendar photograph, the starts were quite orthodox…..

…. they were rather less unorthodox the following year at the 505 World Championship. Gate (or Rabbit) starts were the norm for big fleets back then. What was very unusual was using the committee boat as the gate boat. With 20 seconds to go she dropped the pin and steamed behind the pathfinder as fast as she could (not quite fast enough for the 5 ohs sometimes). A great example though of how the Royal Cork has been inventive in race management – like the leeward gate which had been rarely seen before being introduced at an early Cork Week. 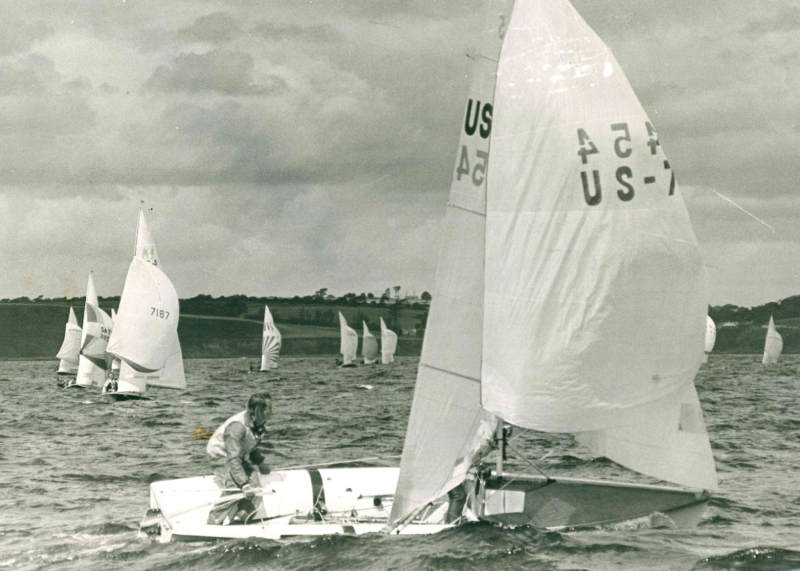 The event itself is probably remembered most for the day the 38kt squall came through from the west and wiped out all the boats that had rounded the top mark that were already under spinnaker. This boat pictured sailed by Steve Benjamin and Tucker Edmudson was 3rd overall with another US pairing Garry Knopp and Cam Lewis winning, ….. 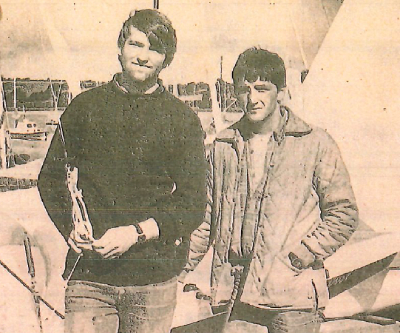 Another year and again the efficient Clayton Love Jnr. officiated as race officer. The Quarter Ton Cup was held just a few weeks after club hosted the World Enterprise Championships in August 1987. 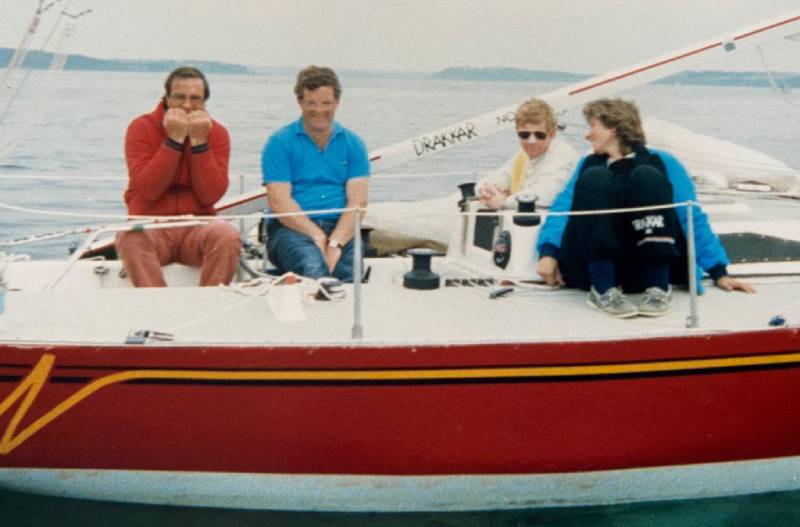 It wasn’t this calm for the first offshore race where 27 boats started in 35 gusting 40kts. The course was Roches Point Mark, Cork Buoy, Bullman, Gas Rigs, Smiths, Bulman, Smiths, Cork Buoy, Finish, (110 miles in 26′ boats!) – no wonder Anthony is biting his nails! Drakkar Noir was a Tony Castro boat chartered by the aforementioned, Clayton Minor and Neil Kenefick and sponsored by perfume (and evidently aftershave) importer and South Coast Boatyard owner Barry Burke. The fourth crew member is Deirdre Collins (now Tingle) fresh from competing at the Enterprise Worlds in the club a couple of weeks earlier! 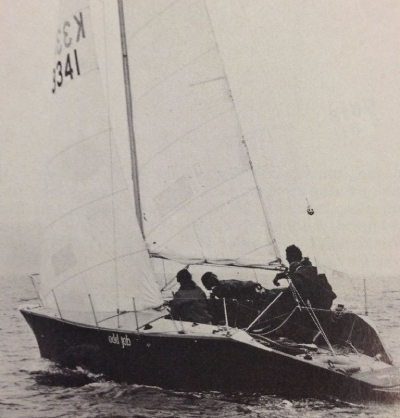 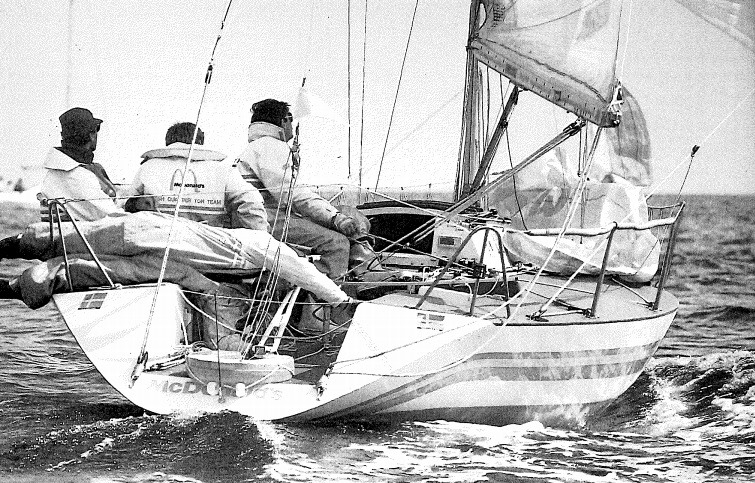 This happens to be the Danish boat that won the event, McDonalds, another Tony Castro design wining a ton cup in Cork. We don’t really understand the sailing technique of the aftermost crew but it was clearly successful!

With the demise of IOR the Ton Cups eventually ceased – however in the second half of the 2000s Quarter Ton racing took off again and here we have a video of a young Royal Cork team at the 2010 Quarter Ton Cup – they went on to win the Corinthian division of same a couple of years later. One of the crew in this video, Nathan Kirwan, fell 30 feet from a tree and was paralysed from the neck down in 2013 – his rehabilitation story is extraordinary and we must commend him for the inspiration he has given to us all. 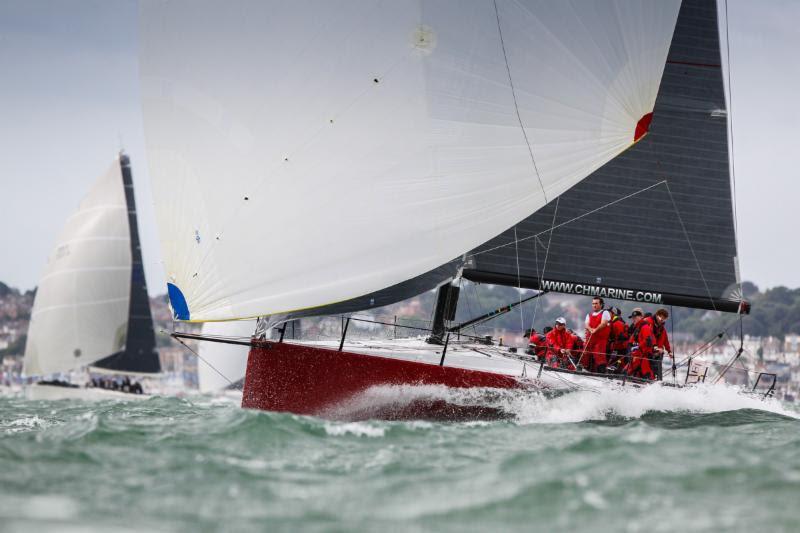 And to close our story – the One Ton Cup was run again in 2016 – this time in the FAST40 Class. We are quite sure that Anthony O’Leary’s Antix didn’t take quite as long as Drakkar Noir to cover 110 miles!