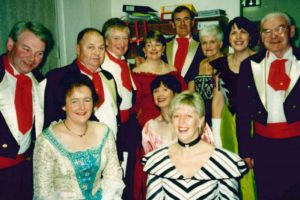 No matter what, our members have a great ability to rise to the occasion. In this post Marina Rose outlines some of the fun and frolics of the wonderful “Royal Corkers” – the group that took no prisoners in their hilarious annual review at the Laying Up supper for many years.

There is a fantastic tradition in the club of members entertaining themselves. Another group developed out of club members not being able to get petrol in 1942 and they formed the “40 Club” which still meets today to entertain themselves and their guests a couple of times a year in the City. They didn’t waste the crisis that “the emergency” brought – your WbW team are in no doubt that members will make the best of the current Covid emergency in due course.

Of course the “Royal Corkers” were the highlight while they continued – the thought occurs that maybe they are just on sabbatical – and hopefully some day soon we might see them rise again bolstered by the next generation.

The mixed laying-up supper of 1989 was sparsely attended, and at the end of the night Brenda O’Mahony approached me with an idea. She wanted to re-introduce the notion of members entertaining themselves, and suggested we form a group to do just that. We called ourselves ‘The Royal Corkers” and our first performance was on St Patrick’s Night 1990, where we delighted the company with sad and merry ballads and an exhibition of set-dancing, thrilling for audience and cast alike! 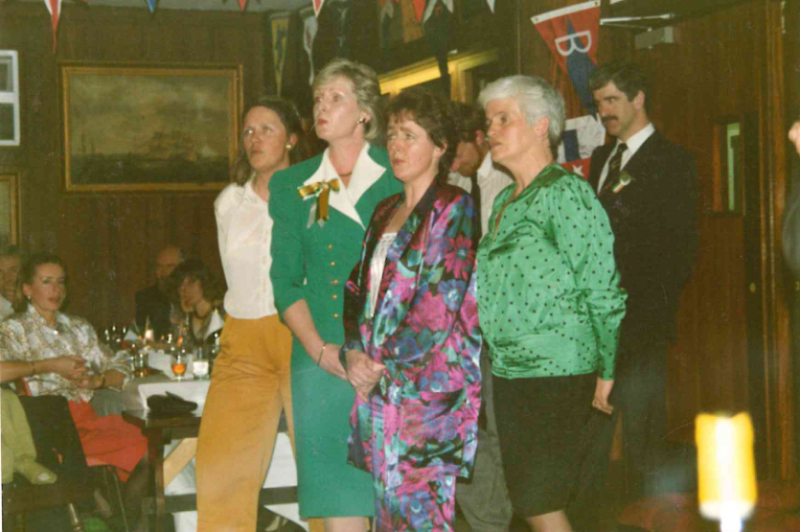 St. Patrick’s Night – 1990. The author with Sinead Dwyer, Louis Hegarty and Brenda O’Mahony are to the fore on the inaugural night of the Royal Corkers, with Tom O’Sullivan and Tommy Dwyer behind. They continued to entertain us for many years thereafter. 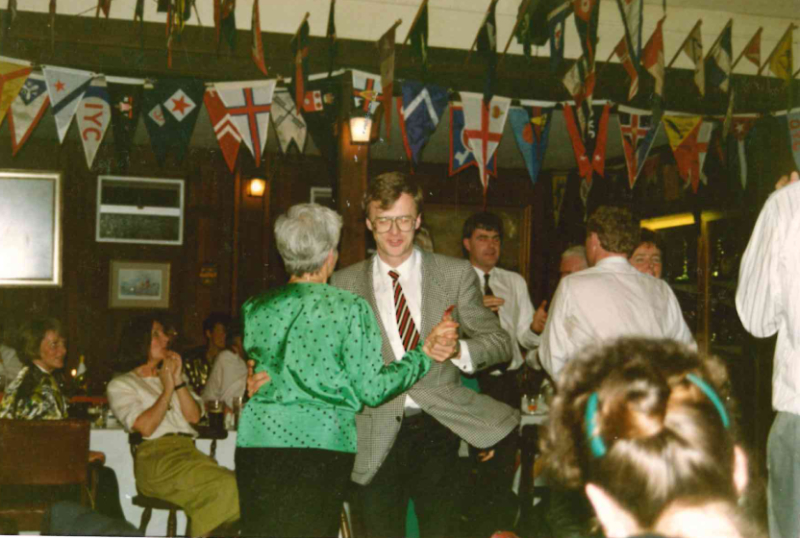 Reggie Geary and Brenda got into the swing of things very quickly…. 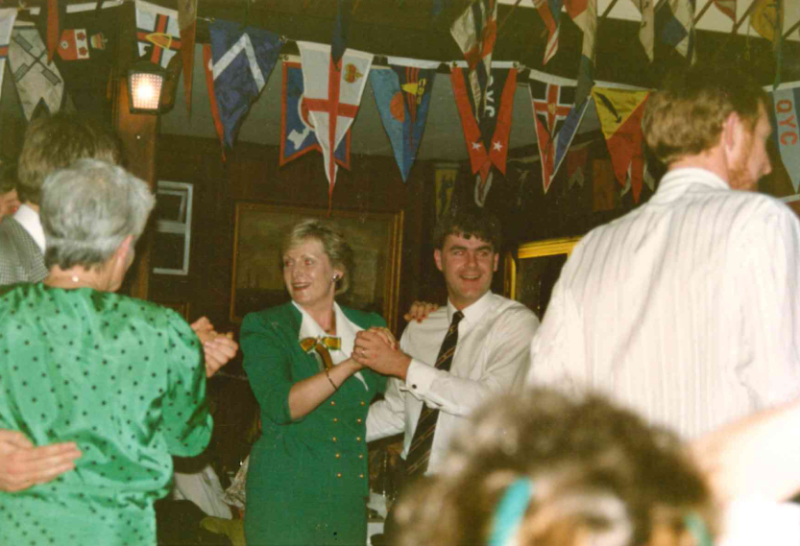 …..as did Pat Dorgan and our author, Marina. Tommy Dwyer has his back to us and as he has rarely been caught dancing we can only presume is bringing a feed of porter to his table!

By the time the mixed laying-up came around again we had become more ambitious and started to mix some topical themes in with the music. Paul Hassett and Brenda sang delightful duets, and the rest of us took potshots at people in the audience. We were a small group then, but soon co-opted more members, who took to the theme with gusto. From the very beginning we had a loyal following, and the event was booked out six months in advance for 20 years! It became a badge of honour to be slagged off in the script. Many a sailor found that the unfortunate incident at the mark, or the accidental chinese-gybe from the start of the season had to be re-lived at the end of November! 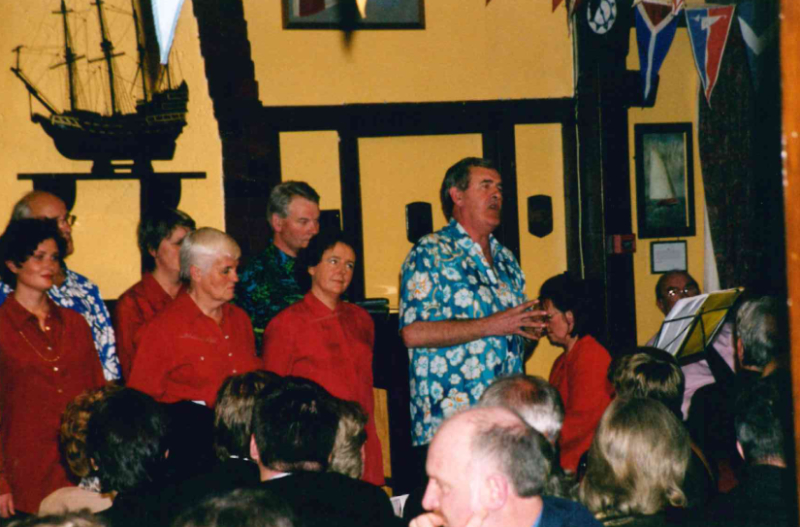 Paul Hassett, with Rose Moore on piano and the troupe accompanying him, singing “Some enchanted evening”

The Admiral of the day always got a pasting, but before we got into our stride myself and Brenda tortured our respective husbands with a repeat item called ‘The Bill and Barry Show’!  We tried not to be too scathing, preferring affectionate stabs to outright death, and didn’t make too many serious mistakes, although there was the occasion where we accused Admiral Conor O’Donovan of poisoning us with cigar-smoke when he had given up smoking two years before – very observant we were! 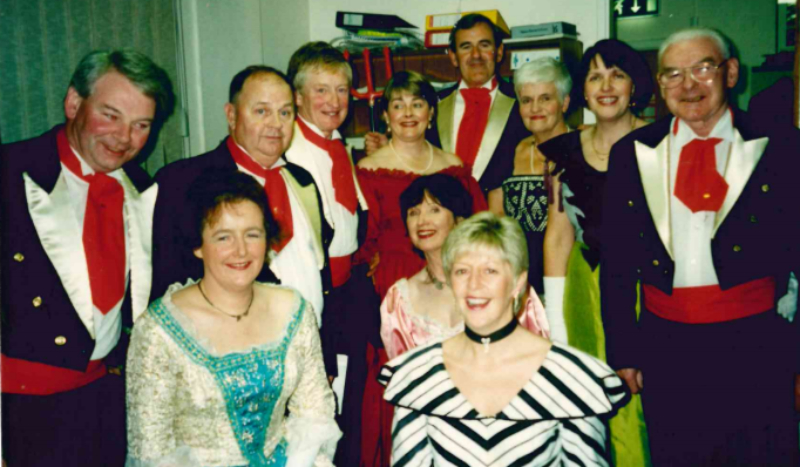 Didn’t they scrub up nicely – ready to remind and ridicule the unfortunates of perhaps their seasonal simple lapse we have the following. David O’Brien, Liam (a dó) O’Connell, Dom Long, Marie Crowley, Paul Hassett, Brenda O’Mahony, Sinead Dwyer, Liam (a Haon) O’Connell, Louie Hegarty, Amy Mockler and in the center the Royal Corker’s skilled,  and their make everyone look good, accompanist, Rose Moore. 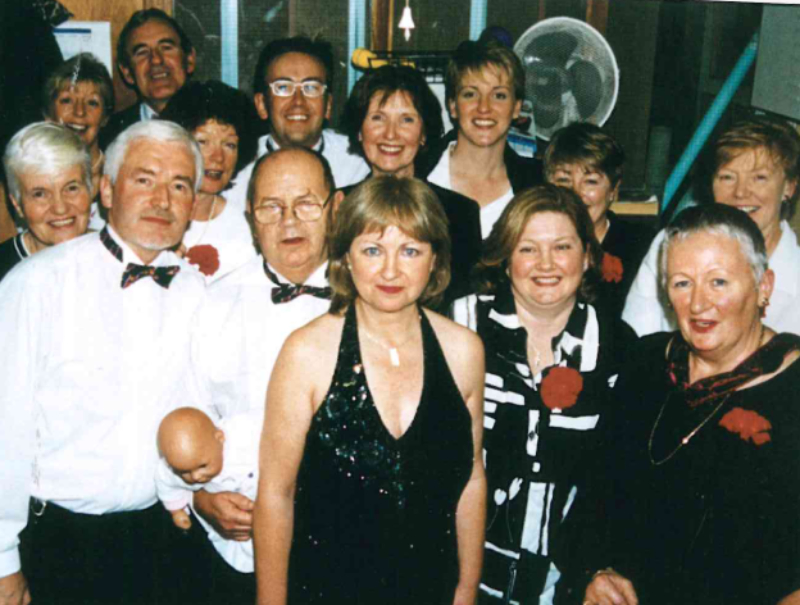 Marie Crowley, Dom Long, Billy Lewis, Patrick Dorgan and myself were the main scriptwriters through the years, and we slogged away from the end of August. We would present a couple of bits each week to the cast, who mostly cut us down and told us we had as much wit as a meerkat; we usually beat them into acceptance and used their comedic talent to carry us through. A couple of snippets:

‘I know I stand in line until you think you have the time to send a ferry for me ….’

Phil Vaughan as an oppy sailor after the disastrous Royal St George Regatta ‘I will survive!’

‘It’s a quarter to three, there’s no one in the bar except Durkan and me’

Brenda on a famously romantic resident of the Grand –  ‘Heartbreak Hotel’

You get the gist.

Marie and Amy became ‘The Admiral’s Angels’, swiping egos and pretensions aside with acid wit.

A notable cast member was Jim Tingle, there wasn’t a dry eye in the house for ‘I’m leaning on the lampost’ and ‘May to December’. 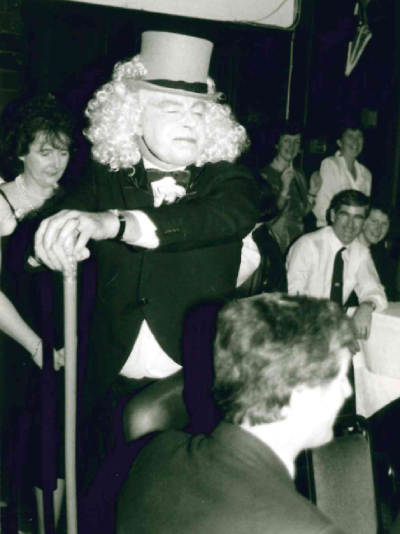 The Dancing Dentist, Liam a haon, performing Lili Marlene in tights and tails.

Our wonderful accompanist was Rose Moore, who had the ability to change key instantly as the cast did, saving our bacon and making us sound good. It fell to her to teach the men the words and tune, no small task, but one thing the men did take up with slightly worrying enthusiasm was the issue of cross dressing; An early example of this was Liam a haon, thrilled to be in tails and tights as Marlene Dietrich singing ‘Lili Marlene’, only to be surpassed by Liam a dó, singing ‘There is nothing like a Dame’ with the scant help of grass skirts and a couple of coconuts! There was also a Spice Girls spot, the less said about that the better! 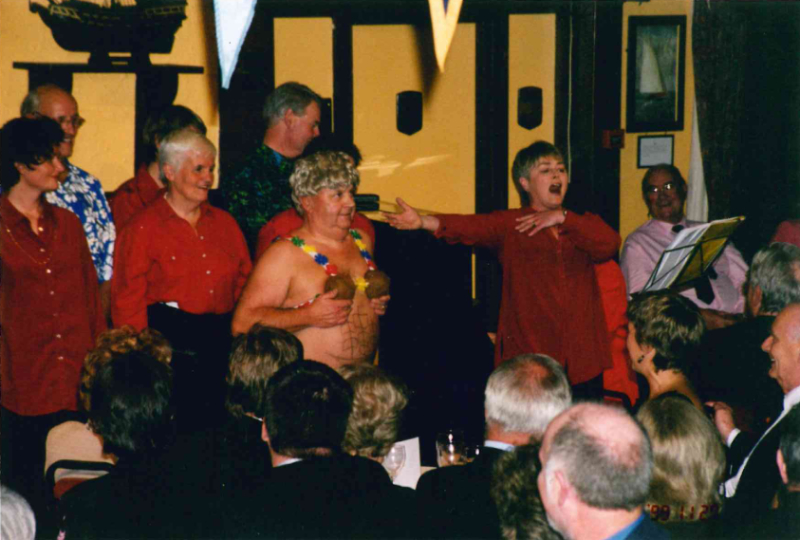 Marie Crowley sings “One hundred and one pounds of fun, that’s my hunny bun” to a tastefully coconut clad Liam a dó with Archie O’Leary looking on admiringly from the corner.

Marie, of course is an exceptional entertainer; we were discussing this article recently and amid peals of laughter we wondered how today’s more politically correct audience would take to two of her best pieces ‘I never do anything twice’, and ‘Bend me over backwards on a dinghy trolley’! 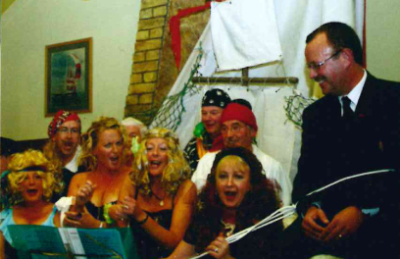 Sarah Boland and her crew in “The Pirate Queen”. Admiral Mockler seems oblivious to the deadly nature of these cut-throats.

All the Royal Corkers remember those years affectionately; we loved to perform and never took our very forgiving audience for granted. We would love nothing better than a revival of the theme of members entertaining members by our young, enthusiastic members, who have begun already with the very successful Member Cook-offs. I personally treasure the long association with Brenda; the instigator and innovator for twenty years, always laughing, encouraging and ready for any bit of craic. She’s sadly missed. 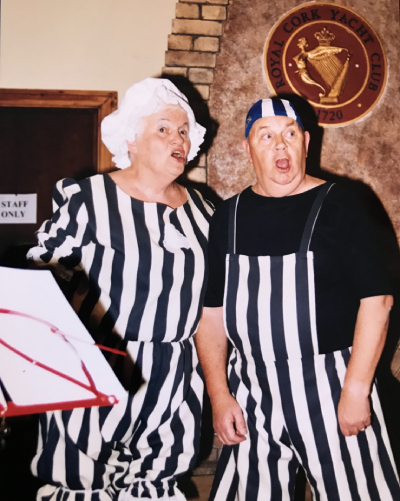 Brenda O’Mahony and Liam a dó O’Connell singing “We’re a couple of swells”. Along with all the Royal Corkers cast they have left a legacy of great memories – may they both rest in peace.

As mentioned in the introduction the club has a continuing tradition of members entertaining themselves and here we provide some other occasions of old, some identified and others who we need help with. We think all these pictures date from the period 1967 to 1972 and all were taken by the then club steward, John Keane. 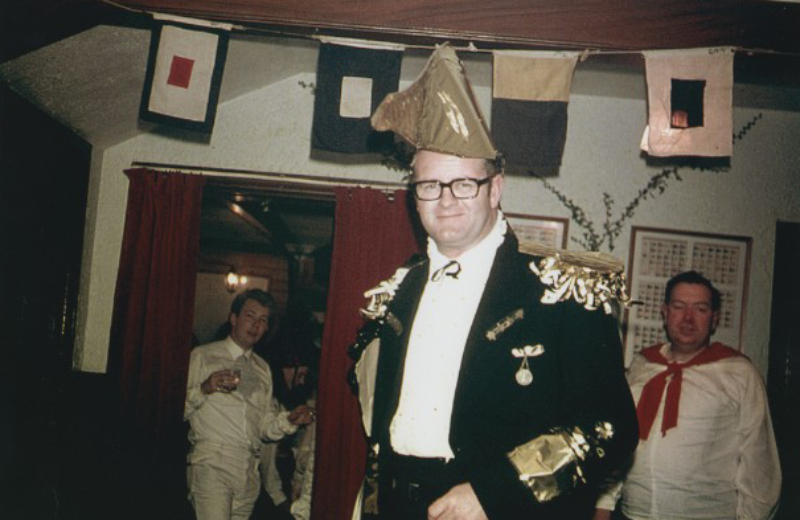 When the Royal Corkers were singing “Love changes everything” they were poking fun at this Admiral’s minor progeny. A properly dressed Admiral at that! 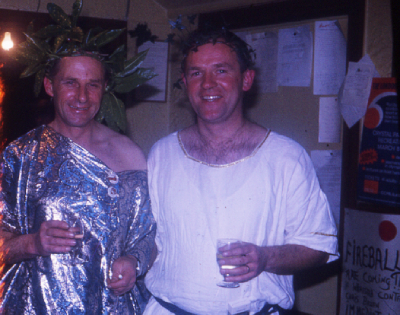 Somers Payne wearing his Olympic Laurels, with Barry Hassett, his crew on the National 18, Melody, at that time. Et tu Brute! 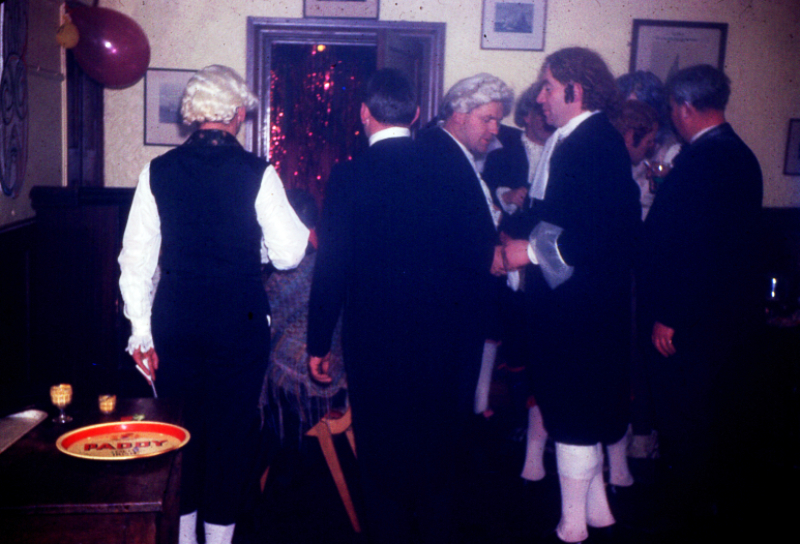 Hopefully not really that many sea lawyers together in the club!

They knew how to dress- we know that the couple on the left is Denis and Mary Doyle but need help with the others.

Harold Cudmore Snr seemed to be taking his time keeping duties quite seriously on this particular night. 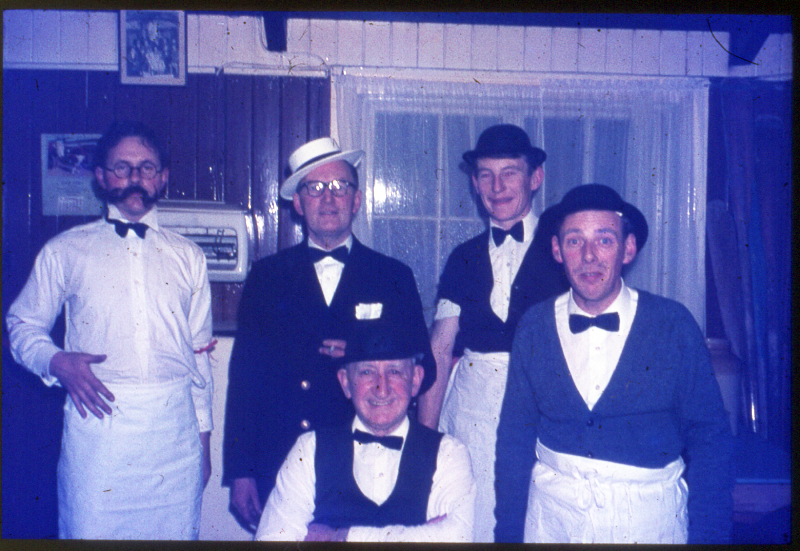 The staff getting into the spirit of the occasion. This picture was taken in the old kitchen which was behind the current bar. The man in the white hat is the steward John Keane and we need help with the others. 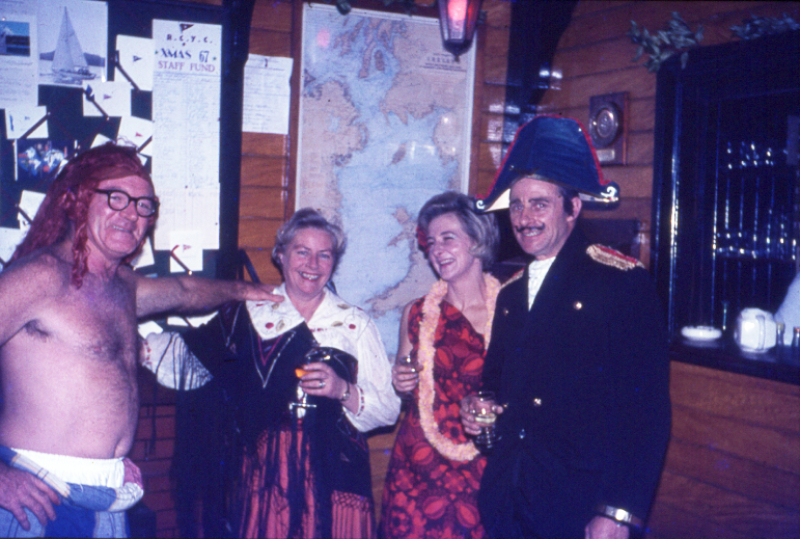 All we know about this one is that it was probably taken on 31st December 1967 judging by the Staff Fund poster on the notice board and our knowledge that their was a regular fancy dress party at that time. And Lord Nelson attended!

And finally – not dressed up on this occasion – but possibly the member with one of the greatest local stage careers in living memory. Dan Donovan was also president of the “40 Club” from 1991 to 1993. As mentioned in the introduction to this post, this group was formed by club members to entertain in the city when they could not travel to Crosshaven during the Second World War. The “40 Club” continues to this day and it’s current president is Peter Crowley, Royal Corker Marie Crowley’s other half.

Note1: If you have names or interesting background info for any picture, in particular the last eight ones on this post (i.e. John Keane’s), please add a comment below or on FaceBook.

Note2: Way Back When No. 17 generated a lot of comments which has helped us to fill out some of the missing names of crew and also correct an error in naming a boat. You can go backwards to that post by clicking on the link below.

2 Responses to WbW#18 – The Royal Corkers