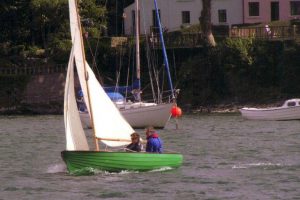 This post is a lovely article by Conor English, one of the principle drivers of the great Rankin dinghy revival of the last five years. The Cobh built Rankin has a large following all over the harbour including being a popular transport on the river…

If you peer closer on many of the photographs that accompany the Way Back When articles, you notice a common face hidden in plain sight. Tucked away in the background, tied up on the marina, on the hard or being towed behind; they are of course our humble Rankin boats. 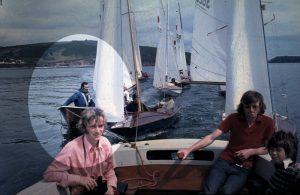 A click on this picture will take you WbW#13 about Cadets and Fireballs – which a Rankin has photobombed! 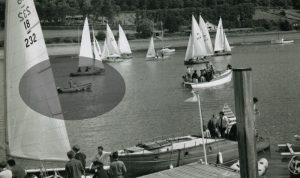 Another Rankin in WbW#9 which is about the National 18s. BTW the motorboat ahead of the Rankin is Conflor which was owned by the author’s grandfather Eamonn.

The Rankins are a revered Cork harbour craft that connect us back to the days when the Royal Cork was based in Cobh. The roots of which, are to be found in the mid 1950s when Eddie Twomey and Eric Rankin produced the line drawings of the Rankin prototype. The first two prototype boats were built in July 1956 in Eric’s workshop on Lynch’s Quay, Cobh. One for Eddie Twomey, (the Fiona) and the other on commission for a Dr Reynolds. 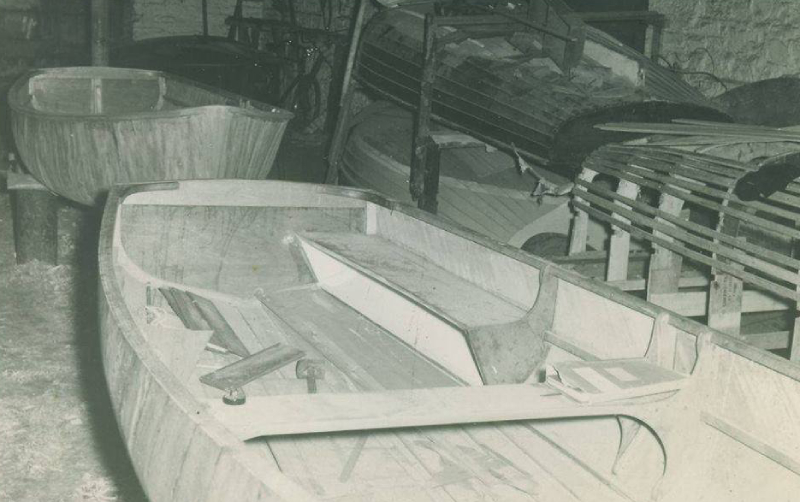 The first two Rankins, seen here under construction in 1956, were cold- moulded, as was the next which Eric Rankin built for the Dublin boat show in 1960.

Eric built the third prototype, his own boat (the Helga), in March 1960 for exhibition at the first Irish Boat Show which was held in Dublin’s Busaras. Eric won 2nd prize in the Professional Boat Building category. All three of these early boats were cold-moulded – three layers of thin mahogany strips, each layer being laid in opposing directions over a mould and glued in place.

This British Pathe video from 1958 of a Firefly being built in Fairey Marine using hot-moulding is what Eric would have mainly experienced in his time with the company. This was a technology they developed during World War 2 for making strong lightweight aircraft in high volume – after the war, in search of new markets, they led the way in mass produced dinghies. Cold-moulding was somewhat similar but more appropriate in low volume settings.

It’s possible that Eric learned this innovative form of construction in Fairey Marine’s yard in the Hamble, England, where he worked for a period before returning to Cork. The company produced thousands of dinghies including the Firefly, Albacore, Flying Fifteen, 505s and the International 14s. The yard was able to turn out these vast numbers of identical boats at an unprecedented quality and price by using new materials likes glues and plywood’s, paired with mass-production techniques that were being developed. All which left a lasting impression on Eric Rankin. 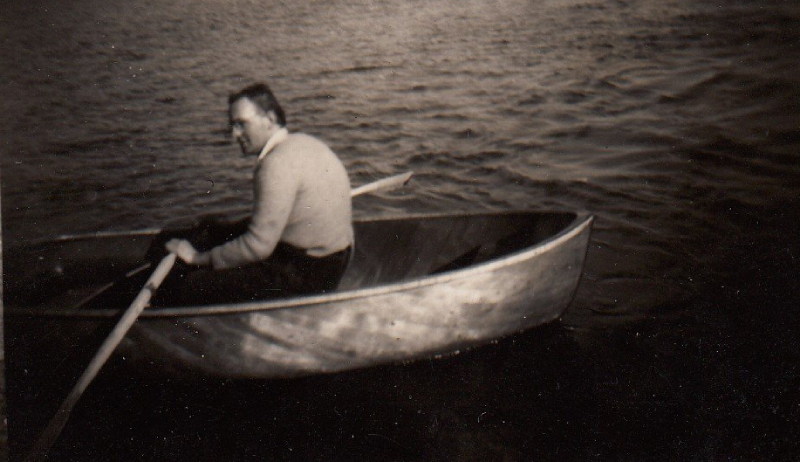 This is a 1962 picture of Eric Rankin. This small dinghy was most likely made by him using the same methods as his earliest Rankins

Eric was just one of a number of master-boatbuilders in the harbour during this period. George Bushe and Jack O’Driscoll were active in Ringaskiddy, Eddie Twomey in Cobh, and Pearse Power in Passage were all building boats, such as National 18s, International 12s and IDRA 14s and of course punts. 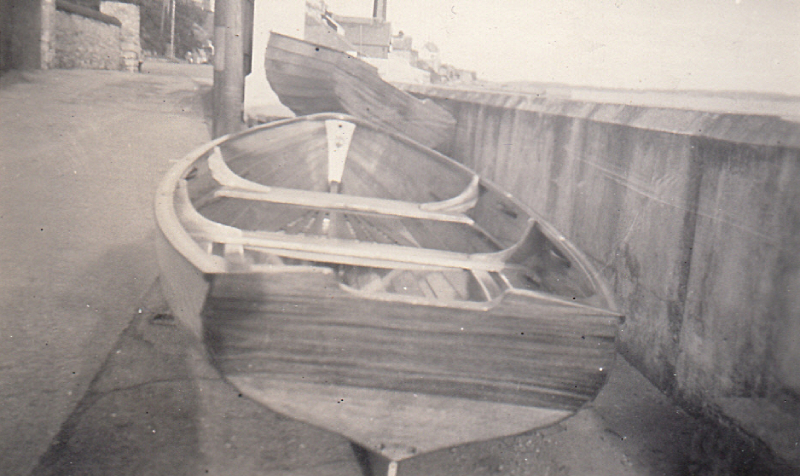 Eric moved to clinker construction after 1960 to simplify the build. Here we see two brand new punts on Lynch’s Quay in Cobh just outside the workshop – date unknown. David Rankin continued building punts and sailing versions after his brother’s early death in 1976 until the mid 1980s

Following the Dublin Boat Show, Eric (who had poor vision) changed the construction process from the more labour intensive, cold-moulded, technique to the “clinker type” construction boat that we are all so familiar with today. The first of the clinker boats were built in 1960 and are still sailing today. It’s believed at least 80 Rankins were built in total, most of which were punts. 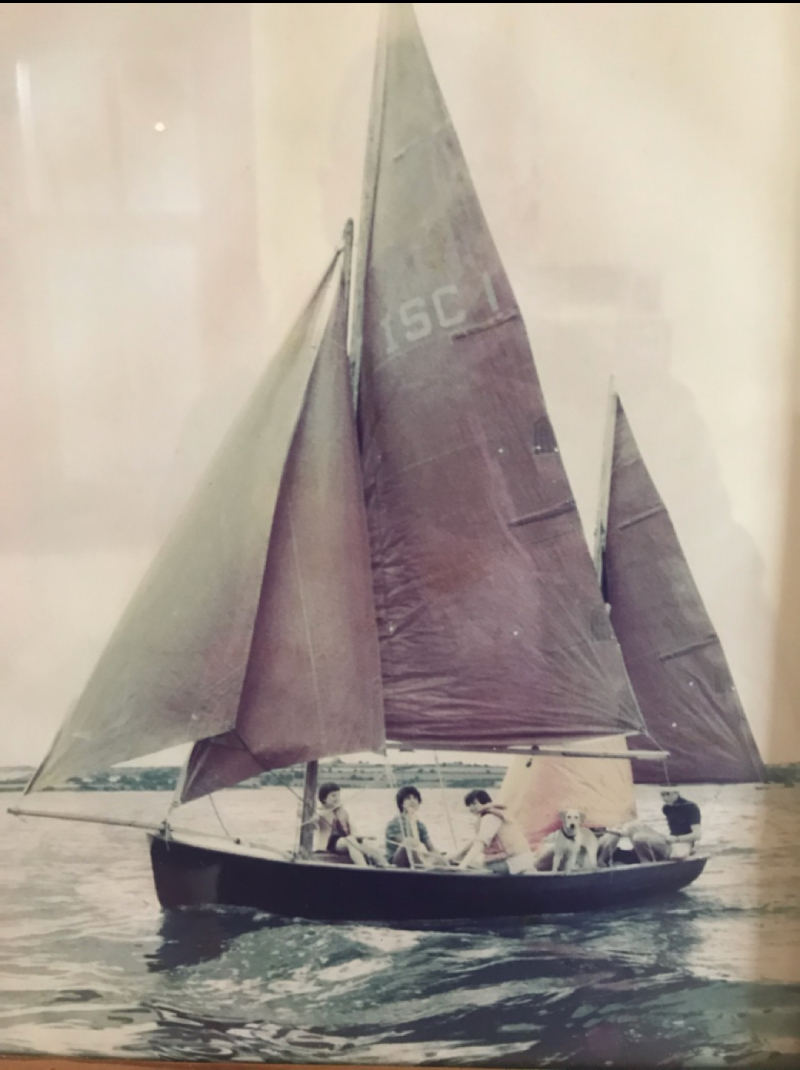 A supersized Rankin! The Holy Grounder was built by David Rankin in 1976 for the author’s uncle, Eddie, for sailing school use. Here she is on the Curlane Bank c1985. Skipper is JP English, ship’s dog Rum, and the crew are the students of SailCork.

The boats proved extremely popular; their light construction made them easy to handle. Their design made them effortless to row, motor or sail; an ideal family boat for Cork Harbour conditions. They became a regular sight in Cobh and notably when the club moved to Crosshaven, in these earlier years they became a choice mode of river transport, commuting ashore long before the days of RIBS and the club marina was built. 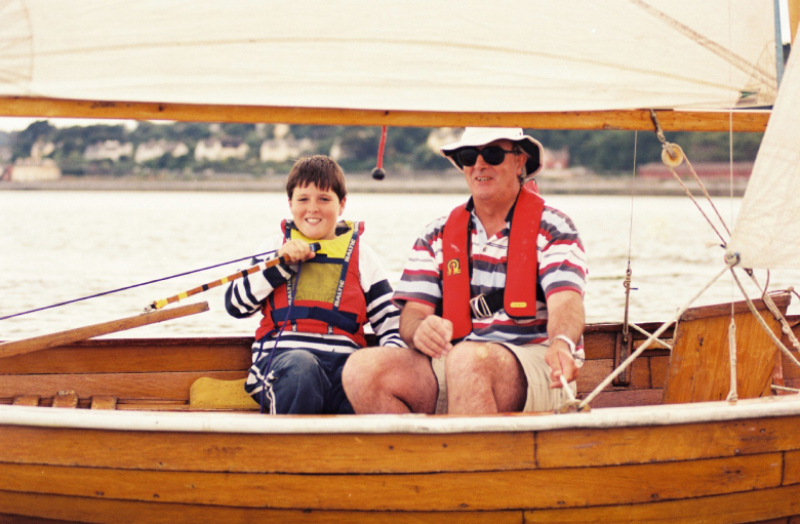 This particular Rankin was commissioned by Conor’s grandmother Mary and has been in the O’Leary family for 30 years – and the young man seen here certainly got his value over that time!

Over the coming years families from all over the harbour commissioned punts from the brothers, which today have been passed down to the next generation, held like family heirlooms. And so prevalent is this popular little boat that there are legions of sailors who grew up fishing, exploring and indeed still own a Rankin. 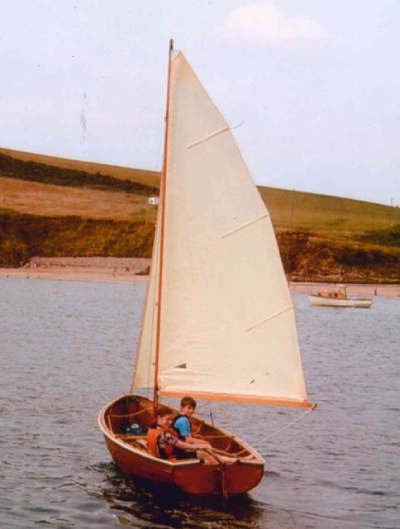 One of the Crosbie boats in White Bay c2004 with Chloe and Patrick on board.

The Keneficks had two, enjoying both a punt and sailing example. The Love family commissioned various, including a custom Rankin tender with a canopy up forward to keep passengers and their hair dry. The Roberts of course have long upheld the Rankin as the ‘proper’ form of commuting to and from Currabinnny. The late Grattan once held a 20-minute conversation educating me on the craftsmanship of the thwart’s knees alone. There’s the Hegarty’s boat, which still enjoys the harbour and exploring West Cork. 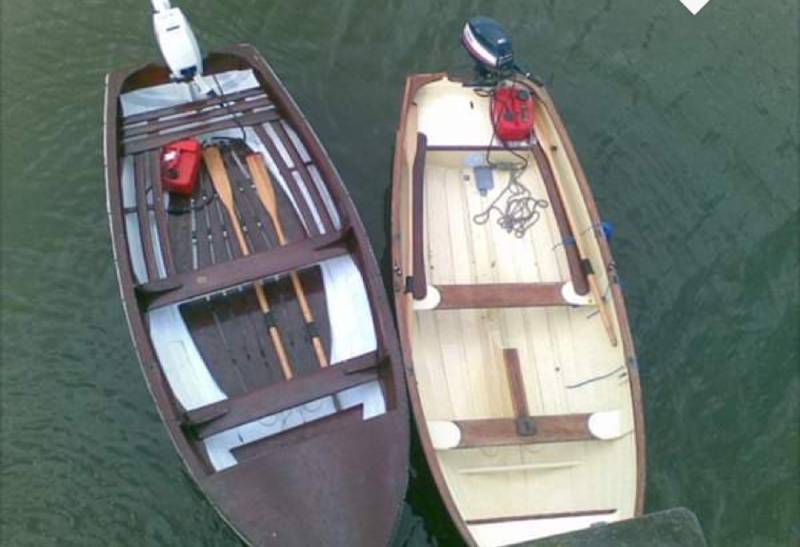 Rankins became the commuter craft between Currabinny and the club. Here we view a sailing and a punt version from the top of Currabinny pier.

The Crosbie’s who it appears had a fleet of Rankins on the river and keep one on call moored off Currabinny Pier every summer. The Crowley’s boat is now a familiar sight in Ardmore sailed by Peter and Sam. In Monkstown the Dwyer’s always had a trusted Rankin dutifully serving their exploits over the years. 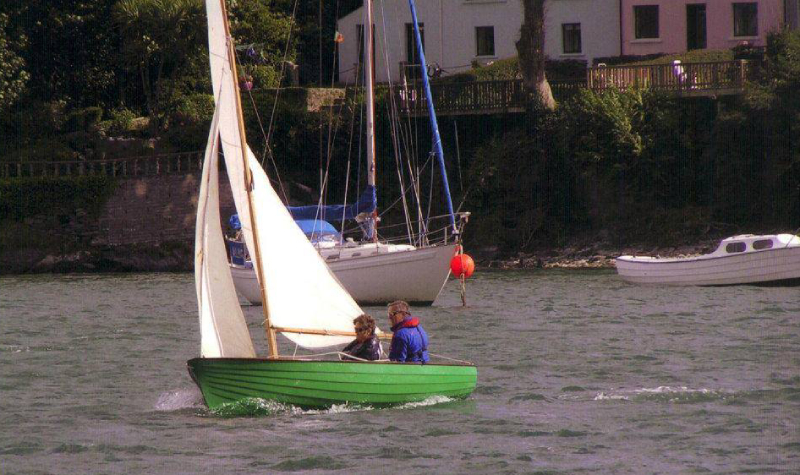 Conor’s mother and father, April and Joe, sailing in Union Hall in their Rankin in 2006. Joe was a force in sailing both locally and internationally. He was the club’s first representative at the IYRU Youth Worlds in 1975, he also skippered NCB Ireland in the Whitbread Round the World Yacht Race in 1989, and Joe (RIP) would have loved to see his twins winning the inaugural Rankin “Worlds” last year.

There was my own family; my father Joe, who in his youth hung out in the Rankins yard, loved the boats endless versatility. Eddie had six at one stage working hard in the sailing school in Cobh and our original family Rankin dinghy, commissioned for my grandmother Mary, has been in the careful ownership of the O’Leary family for 30 years. The O’Leary’s have also recently restored a rare Rankin pram dinghy to serve as a yacht tender; continuing the practicality and value these great boats still provide today. 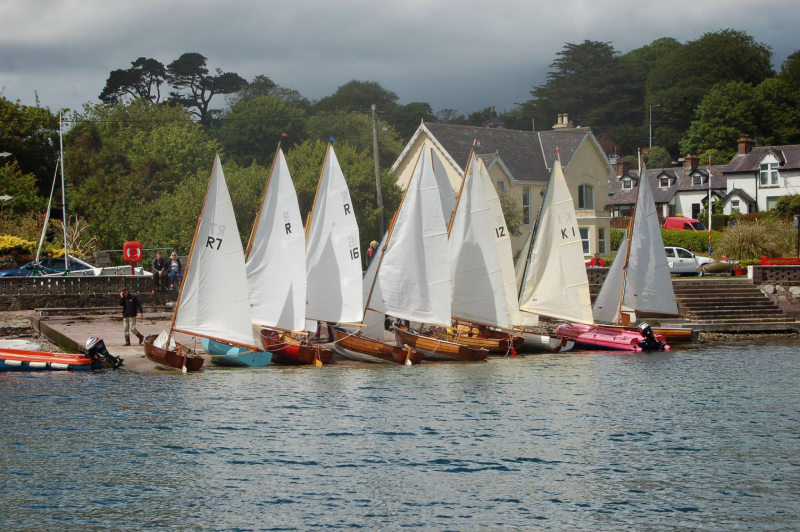 A recent gathering of sailing Rankins at Whitepoint. The sky blue boat is one of the very early cold-moulded caravel hulls.

As the years rolled on, the Rankins on the river, continued and enjoyed longevity with families due to the work and expert dedication of Dick Gibson. Dick, who always brings the ‘Monte Carlo’ standards of finish and quality to even the humblest of Rankin in his care, has worked on countless restorations. 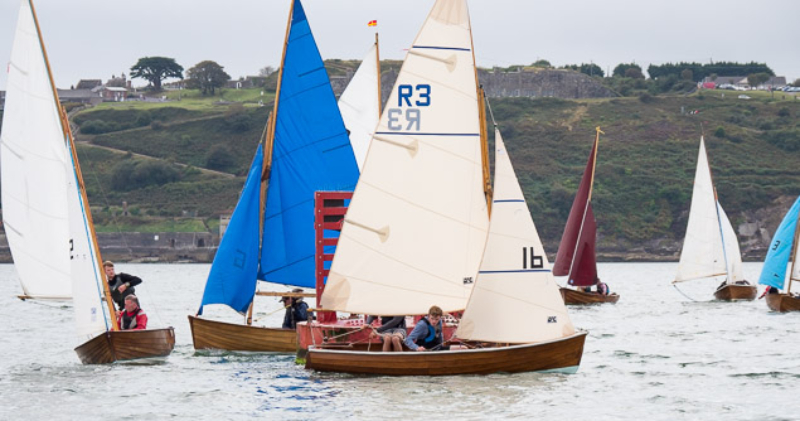 Some of the 21 strong Rankin fleet competing in the “Worlds” during last years Dinghy Fest. Leading this race is the eventual overall winning Rankin which was sailed by the author and his brother Robbie.

But over the years collective sightings of Rankins sailing in the harbour became rare sight, and in 2014 a group of like-minded souls from Crosshaven, Cobh and Monkstown came together to see what could be done to revive interest in the Rankin. By last summer the Rankin Dinghy Class had the three prototype boats back on the water and gathered 21 sailing dinghies at the Rankin ‘’World’’ Championships as part of Cork Dinghy Fest 2019. 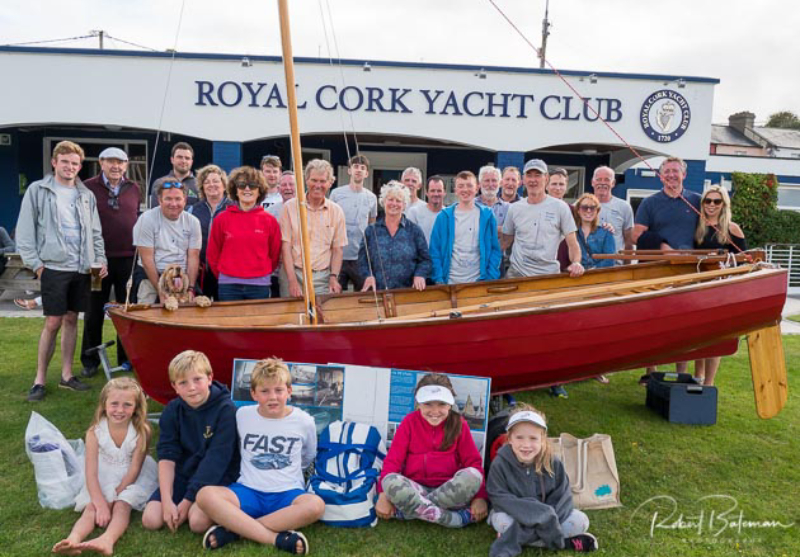 The Class are proactive in locating and restoring project boats and finding them new homes. To date five Rankins have been placed with new owners. Three of the boats were punts in poor condition which the Class restored and carefully converted to sail. This is done through voluntary efforts and the goodwill within the group over the last 3 winters. The current winter 2019/2020 project set for launch this summer.

Some people can’t have enough!

The enduring appeal of the Rankin boats is unmistakable. We can all agree there is something special about working and maintaining wooden boats in general; it’s rewarding, cathartic and reassuring. Even if your patience with varnish and sandpaper is at times absent, you can’t deny their beauty in construction and aesthetics. Without digressing into the reasons why people feel an affinity for timber, and why we enjoy working with it, small wooden boats of traditional shape are a special joy to many and in Cork Harbour the Rankin occupies this space. A simple, no fuss boat enabling families to enjoy and still use it for its best of its merits; to simply motor, sail, row and generally to enjoy messing about around the harbour. Long may it continue. 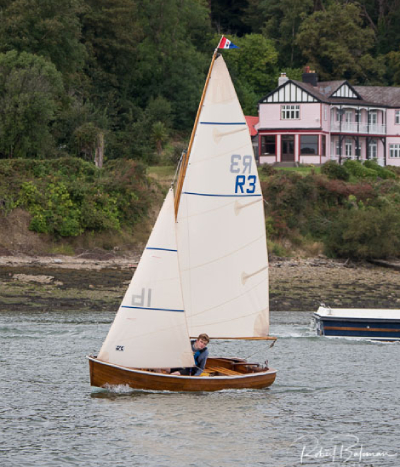 The perfect versatile small boat for the harbour. Thanks to our author and other aficionados of the Rankin the future of this local craft is safe for many years to come.

The class has a Facebook page – Rankin Dinghy Class