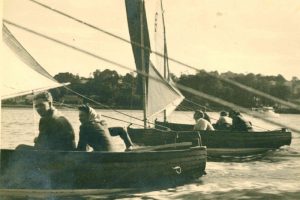 In WbW#4 we discovered the ladies bar that was behind the fireplace up to 1946. By coincidence we have a nice photograph from that year of a ladies race in dinghies with some nice connections to both the past and the present.

The rules of this series dictate that items must be in living memory – so the photograph just qualifies on the basis that the crew in the center boat remembers! 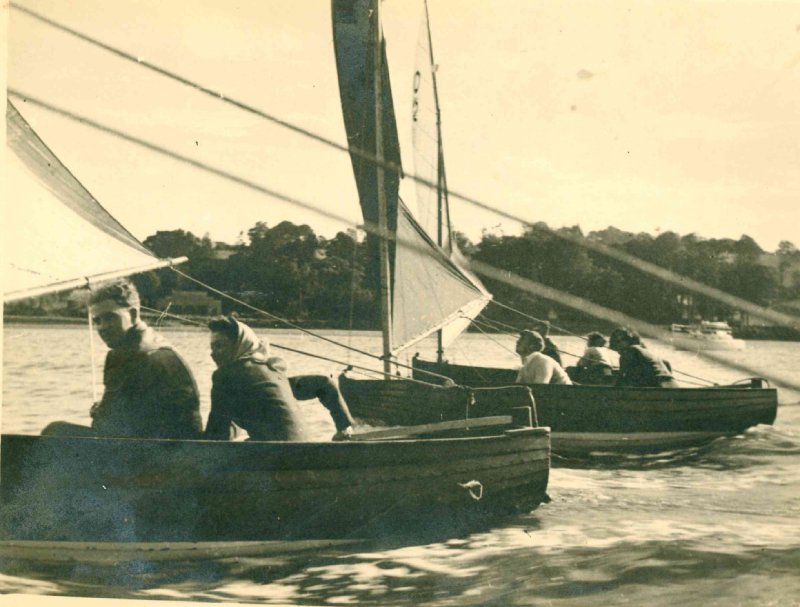 The ladies race of 1946. The boats are 12 footers, the first truly international dinghy class – it was the dinghy class of the 1920 and 1928 Olympic Games. Mary Woodward (subsequently Doyle) to windward (crew unidentified, please help), Mary Crosbie (subsequently Dwyer) is in middle (crewed by her brother Ted), with Mrs Stoney of Currabinny (crewed by her son George) to leeward. The boats (windward to leeward) are Curlew, Drisheen and Dudeen. Drisheen was the boat in which Captain Jimmy Payne had won the Dinghy World Championship in 1925 when held in Crosshaven. 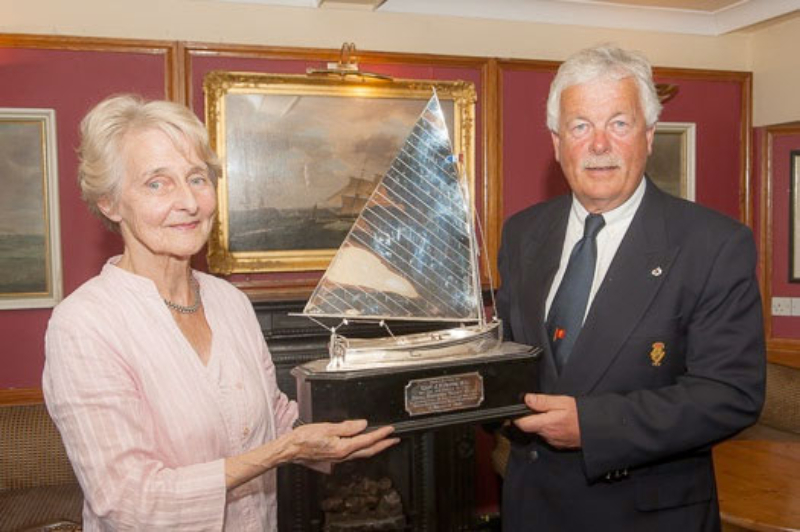 Captain Payne’s first victory was in Belgium in 1924 which meant that the championship came to Crosshaven the following year. When he won the second time Captain Payne was presented with this beautiful silver model. Here we see his daugher-in-law Eithne presenting the trophy to then Admiral Peter Deasy in 2011. It now is presented again annually to the best National 18 of the season. (photo Bob Bateman)

The trophy with the inscription “Presented to Capt. J W Payne MC by the members of the Royal Munster Yacht Club in recognition of his winning the first Worlds International Dinghy Championship in Belgium 1924”. On the secondary plinth underneath are recent winners of the trophy including names of various Dwyers and a Crosbie – all offspring of Drisheen’s helm and crew of 1946.

Also of interest is that the helm of Curlew went on to become Lady Admiral of the Royal Cork in the early 1970s while the crew of Drisheen was Admiral in the mid 1980s!

Further information on the 12’s in Ireland including more on the Payne victories can be read here http://12footdinghy.org/countries/ei.asp

The class is quite active and some 12s are expected at Clinkerfest in late May as part of Lough Ree Yacht Clubs 250th anniversary celebrations.

Finally there is a book available on the story of the International 12s in Ireland by Vincent Delaney – see https://www.blurb.com/b/8609274-internation-12-foot-dinghy-in-ireland

WayBackWhen is being published as a regular series in the run up to the Cork 300 celebrations next July. The publication team are interested in photographs and articles showing the life of the club in living memory and are inviting submissions at this time.   A number of members have already kindly agreed to write articles on specific subjects – for an example see WbW – The Cork Harbour One Designs by Patrick Dorgan. If you have items of interest or a good story that fits the theme please make contact through 0ffice@royalcork.c0m