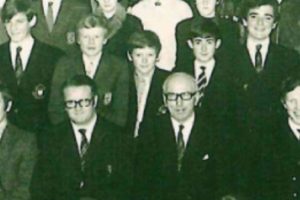 Members make any club and today’s photograph from 1971 is not just a snapshot of that time – it also illustrates nicely the inherent strength of the Royal Cork. 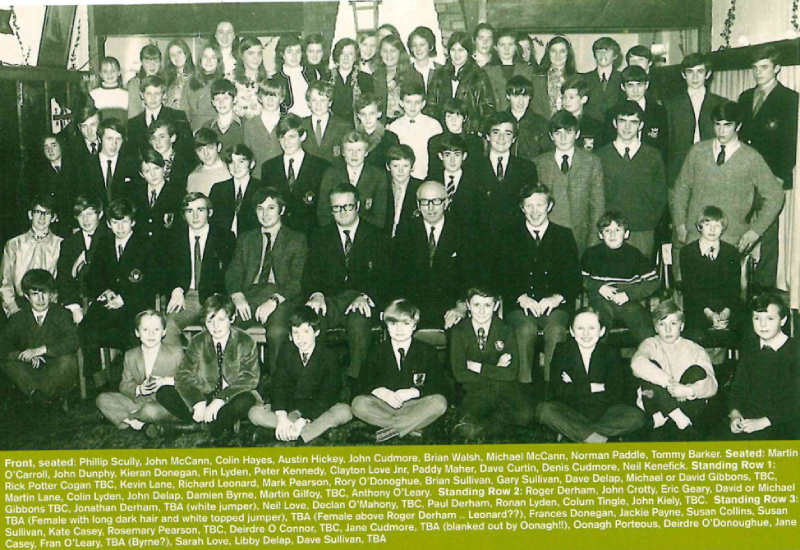 The event was the annual presentation of IYA (forerunner to the ISA) badges to cadets who had completed one of the three stages of the sailing courses. Most of the individuals in the photograph are still involved in sailing at some level and some have gone on to great achievements on the international stage. If some of the faces look quite familiar perhaps that it because a fair few of the clubs junior section of the last 25 years have comprised of their offspring!

Clayton Love Jr. as Admiral led the club through it’s 250th celebrations and  went on to become one of the members at the forefront of the great Irish Admirals cup campaigns (then the pinnacle of international yachting) of the later 1970’s.

Also in the photograph is a future Admiral who would go on to lead several successful Commodores Cup campaigns – winning outright in 2010 and 2014. He was elected as our newest honorary member at the AGM this January. See if you can spot him without using the caption (hint: looks like Nin!).

When this photograph was published with it’s caption in the 2009 yearbook most of the names were known.  If you can help fill in the blanks (or correct if required) we will endeavor to republish the full caption at a later date. Please use the comments on FaceBook or below if you can help.

UPDATE 30/01/2020 – this article has generated much interest already on Facebook including another IYA badge presentation photograph which we think is either 1976 or 77. The cadet numbers are much smaller in this photo that the 1971 one above – we believe the photo below may be of a single stage group whereas 1971 is of all three stages.

WayBackWhen is intended to be published as a regular series in the run up to the Cork 300 celebrations next July. The publication team are interested in photographs and articles showing the life of the club in living memory and are inviting submissions at this time.   A number of members have already kindly agreed to write articles on specific subjects – for an example see WbW – The Cork Harbour One Designs by Patrick Dorgan. If you have items of interest or a good story that fits the theme please make contact through 0ffice@royalcork.c0m