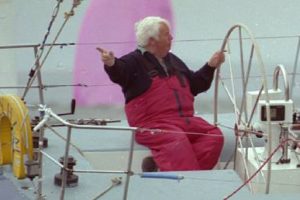 This post is a follow on to WbW#15 where we republished some fabulous photographs by Bob Batemen as part of the celebration of the work he and Claire did over the years. Here are more of Bob’s great photos, with a focus on the crews.

Social distancing is our new normal – in these photos there is lots of social and not much distancing – we are all looking forward to getting back to this normal again soon.

Help Please: For every post up to now we have been able to get out and find the help needed to identify as many as possible in the photographs. This week it has been a bit more difficult for your WbW team to operate so we need your help with lots of names. We have numbered each photo so please use the comments below (or on Facebook) to help us fill this out and we will the update the captions asap. 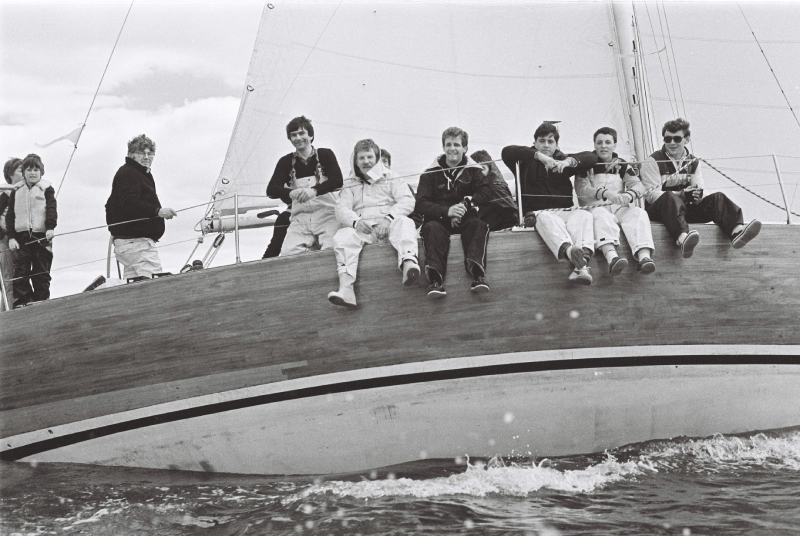 #1. Here we have Dougie Deane on Irish Mist II with a multitude of crew, including Paul Crowley, Peter Collins, Tom Hegarty, Billy Pope, Michael Sullivan, Frank (Fox) O’Neill, Douglas Jrn and behind him his brother and our current General Manager Gavin. We will be covering this boat more fully in future posts – we think this pic is from Jim McCarthy’s time; it was Jim that rebuilt her following her argument with Weaver’s point in October 1979. UPDATE: Bobby Wain has been identified between Billy Pope and Peter Collins. 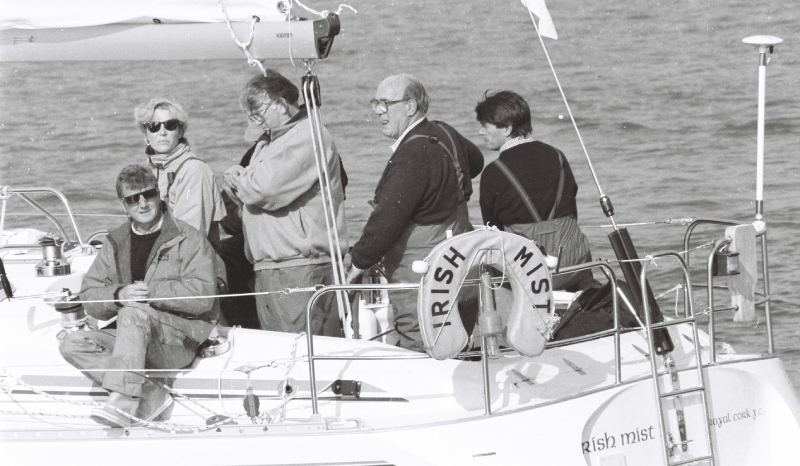 #2. The previous boat’s original owner Archie O’Leary looks keen to get going at a start with Dougie eyeing the time. And Fran has eyed the photographer. Fergus O’Neill and Len Curtin complete the Irish Mist III’s crew that day. 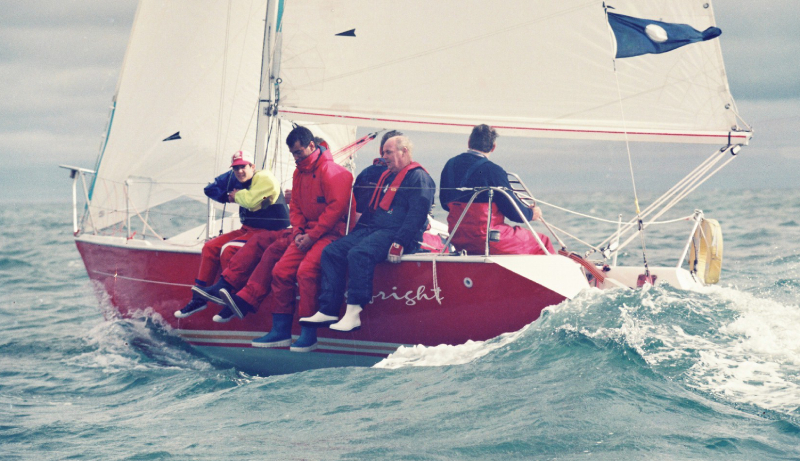 #3 Stagefright sailed here by Martin Darrer is a Formula 28 . Please help us by naming the crew. 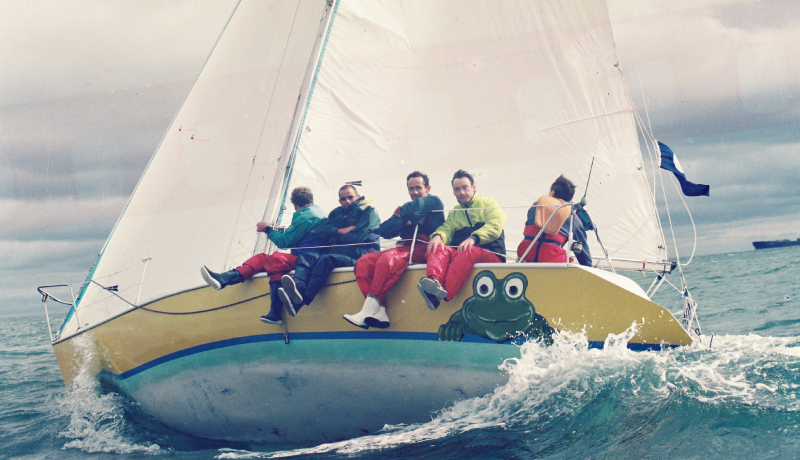 #4. Another Formula 28,. This one is Bullfrog which is being sailed by Peter Murray with Diarmuid Foley identified on the rail. Their previous boat Red Robin is in WbW#15. 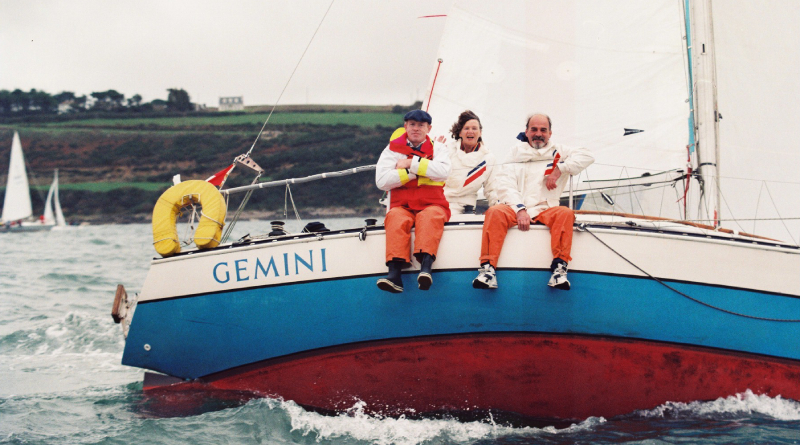 #5. We think Gemini is a Trapper 300 – we didn’t think the Healy-Rae’s liked yachting so much! 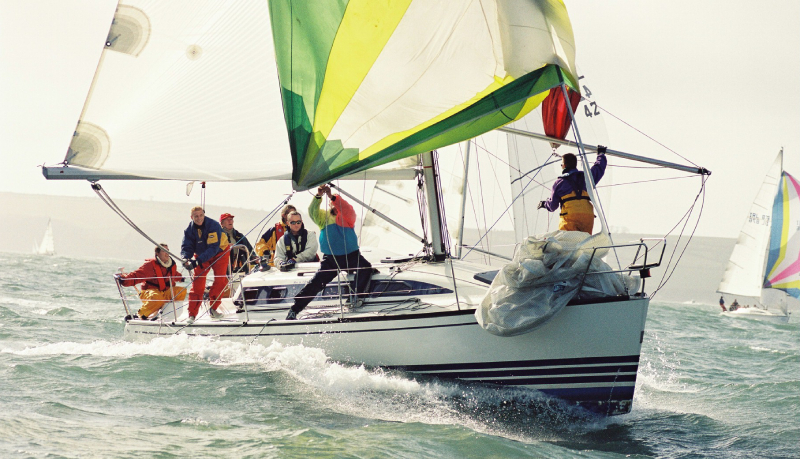 #6. Mary O’Keeffe’s Tux on maneuvers with Darren O’Keeffe (no relation) on piano. 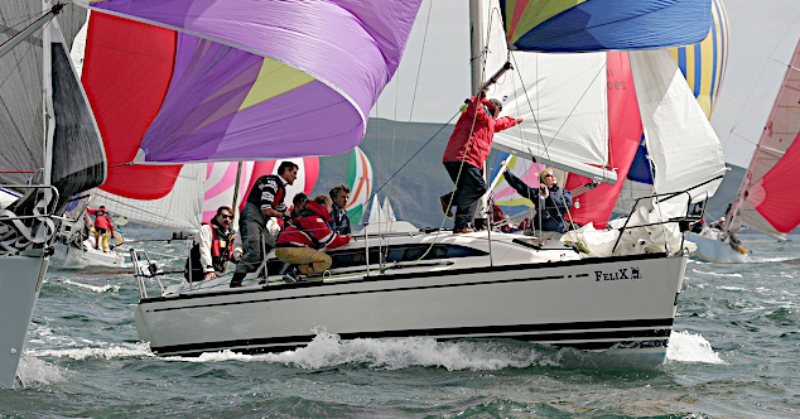 #7 Another X332 on maneuvers, this time it is Mick Wallace in Felix. 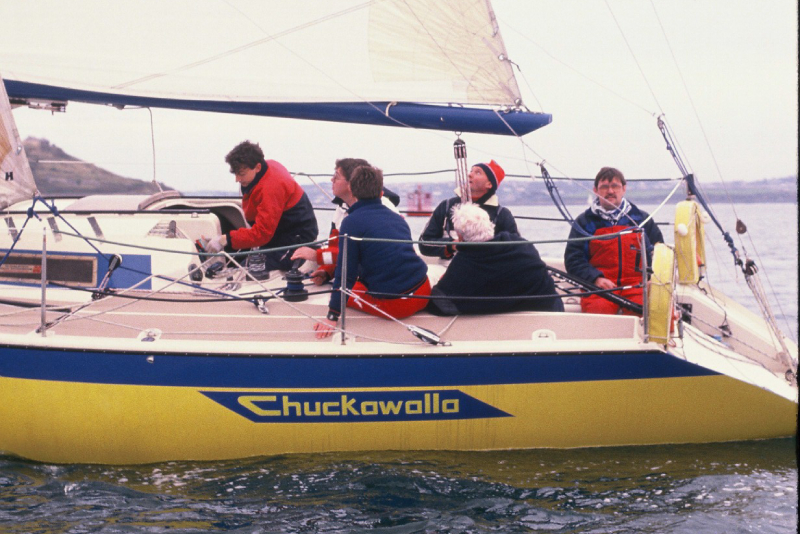 #8. Peter O’Shaughnessy, Tom Crosbie, Simon Butler, Niall McPhillips, Derry O’Connor and Ted Crosbie. This was one of three DB1s in the harbour at the time – the others were Luv Is and Rumkinilly. 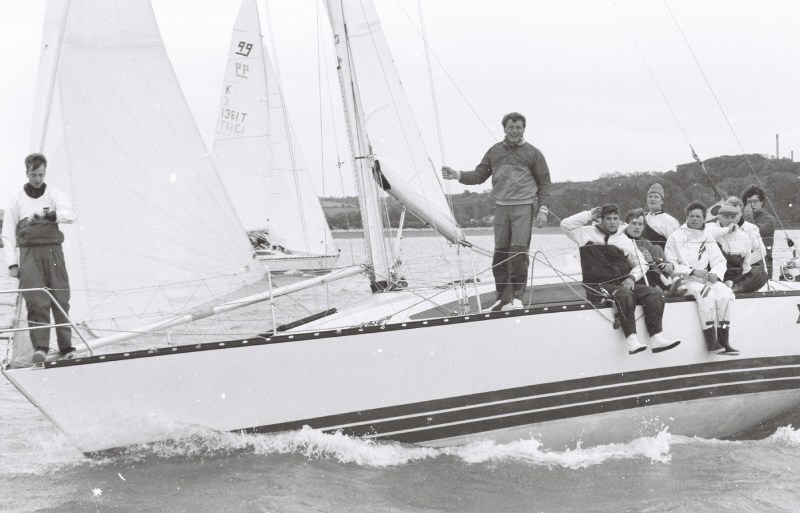 #9. Dave Meagher, Paul Crowley and Dave Hassett have been identified clearly but we need help with the others. We think this is the X99 which Jim McCarthy had after he sold Irish Mist II, the boat in #1 above. You will note the other X99 in the background. UPDATE: The boat is X-Cavator, which also features further down this page. Here she is, having been chartered by Hugh Coveney for the October League in 1991, being sailed by Maurice ‘Prof’ O’Connell. Crew includes Dave Meaghar, Paul Crowley, Dave Hassett, Simon Coveney and Ronan Collins and perhaps Aidan O’Connell. And most likely the x99 in the background is X’tsea – Jim McCarthy’s boat referred to above. 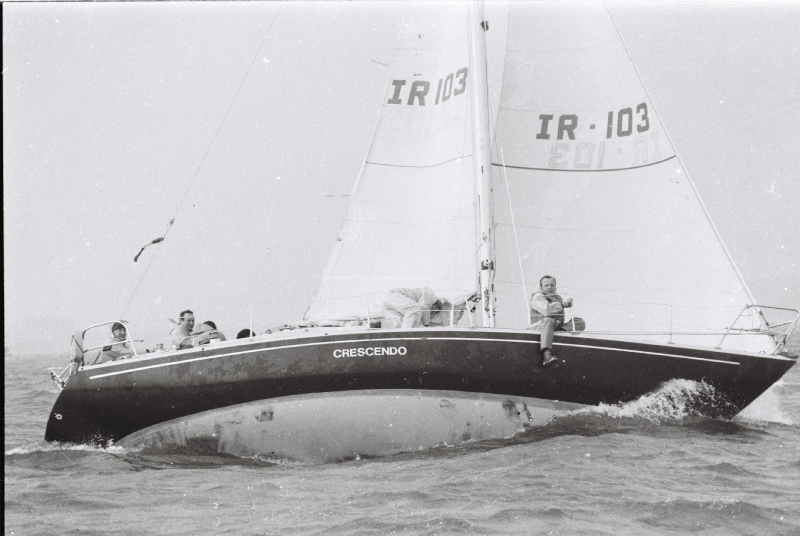 #10. Crescendo is being sailed here by Noel Browne. She was subsequently bought by George Barry. 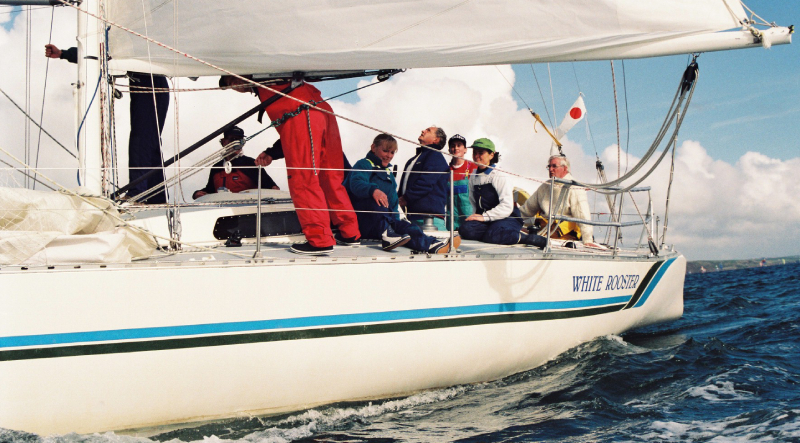 #11. Jim Donegan raced White Rooster in many Fastnet and Round Ireland races – Frank Doyle sailed with him for many years. 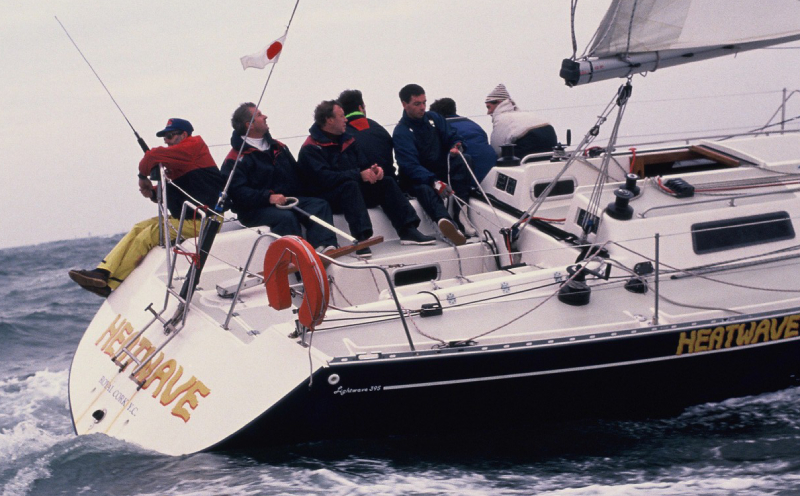 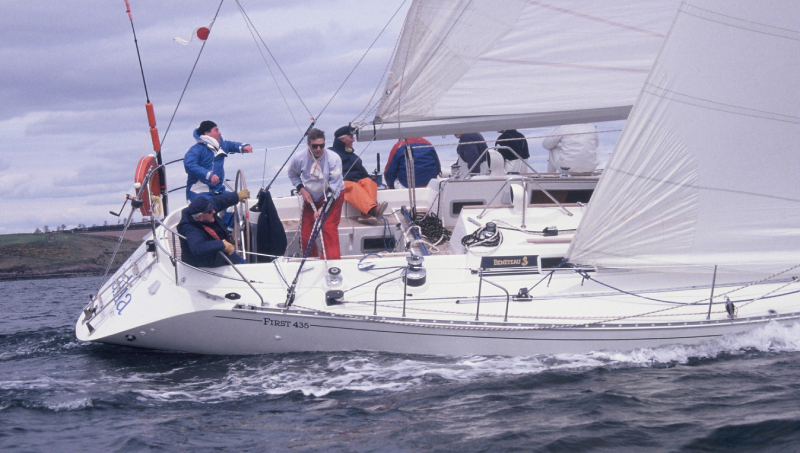 #13. Jim Collins on Thalia with Mickey Ahern above him. Bill O’Mahony on coaming and Martin Landers trimming main. 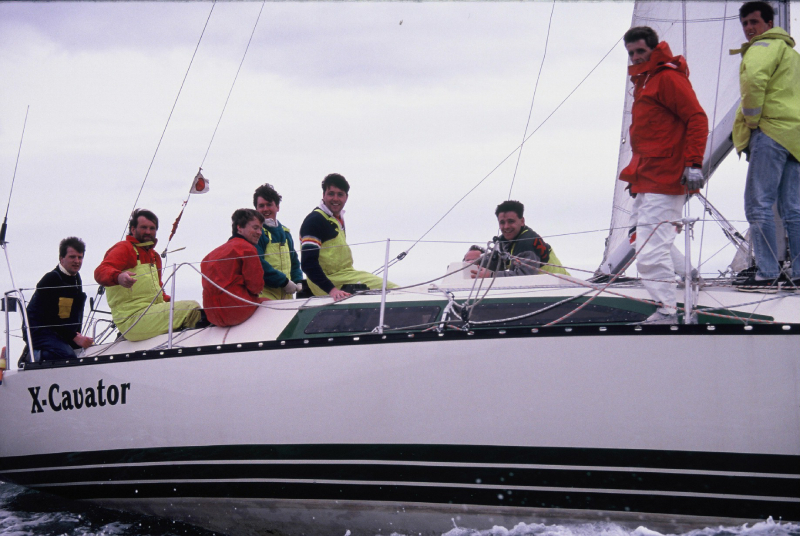 #14. X-Cavator was Staff Mansfield’s last boat – here we have Mark with Terry English, Johnny McCann and others, please help again! UPDATE: Bobby Wain and Peter Donegan also on board that day. 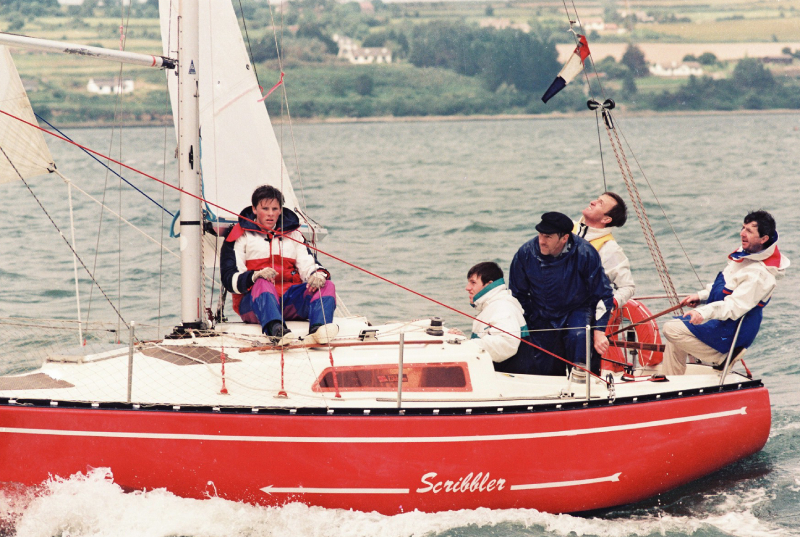 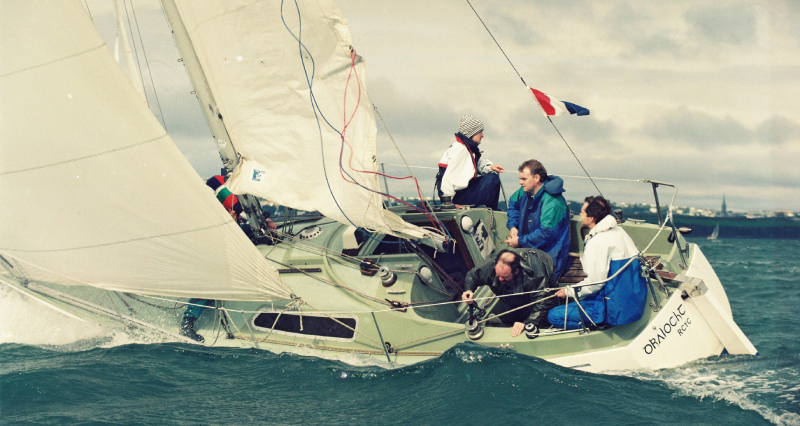 16. Draiocht with Kieran and Liz O’Brien on board some years before they moved to Magnet, their trusted MG34. 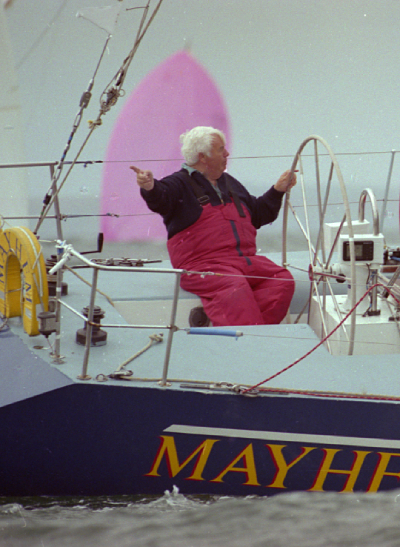 #17. And to close this post – an early example of social distancing – or else nobody would crew for Ted in this rather aptly named boat!