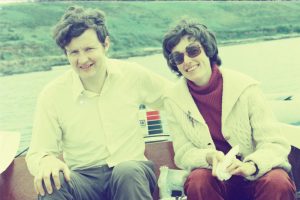 The WbW series relies primarily on photographs for its mission to tell interesting stories about the club, the boats, the members and indeed the wider harbour community. This post celebrates one photographer and his better half that have done so much for so long…. 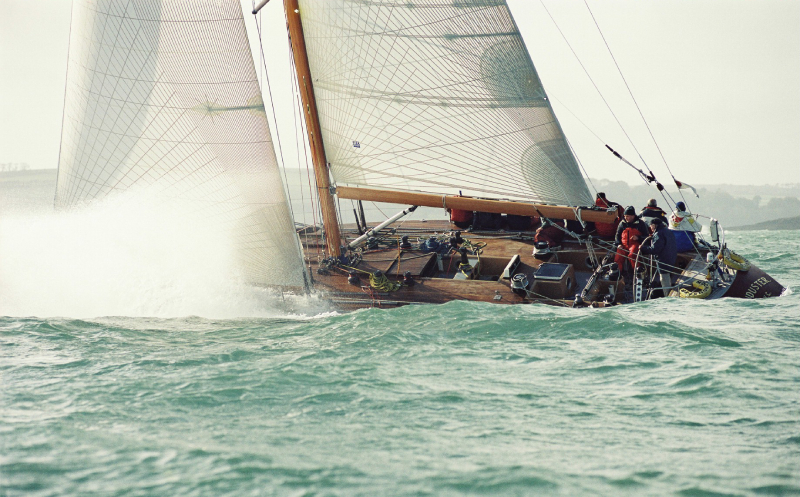 Firstly let’s just enjoy some of the work. We are possibly biased given she was built in Crosshaven Boatyard but we don’t believe there was ever a more beautiful sight to be seen in the harbour than Moonduster powered up… 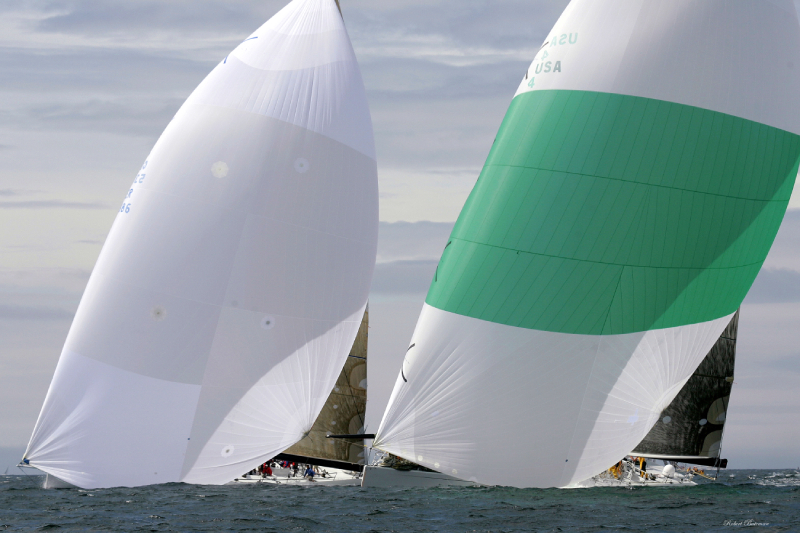 ….and there has been some spectacular moments over the years. This one is when Roy Disney’s Pyewacket and Hasso Plattner’s Morning Glory did battle at Cork Week in 2006. The boats were 85 feet long and generally travelled at over 20kts. 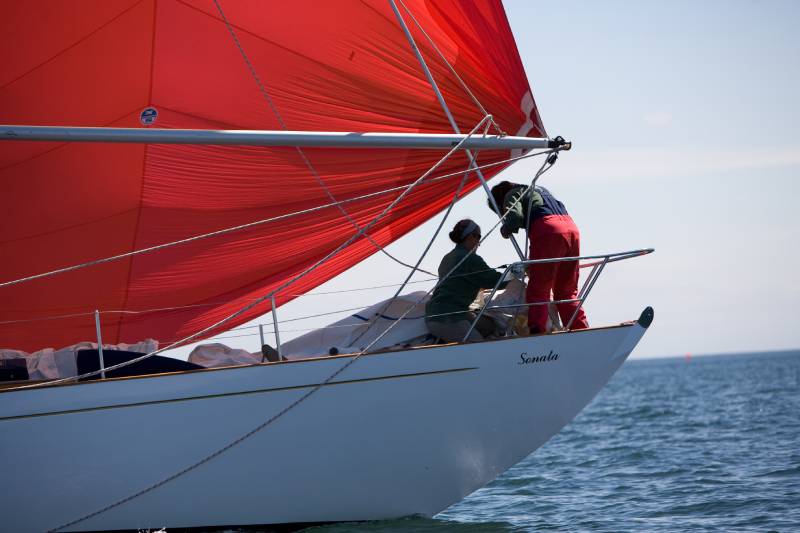 There have been more sedate moments to capture. There was a Sonata in the harbour which Tom Doyle raced in the 1960s and which was moored just in front of his brother Denis’s original Moonduster near the Nav bouy. We don’t know if this is the same boat but maybe someone will help in the comments below. UPDATE: 16/07/2021 Some 16 months later we have the confirmation needed that it is indeed “the” Sonata – see today’s communication from her owner of the last 20 years at the bottom of the article. 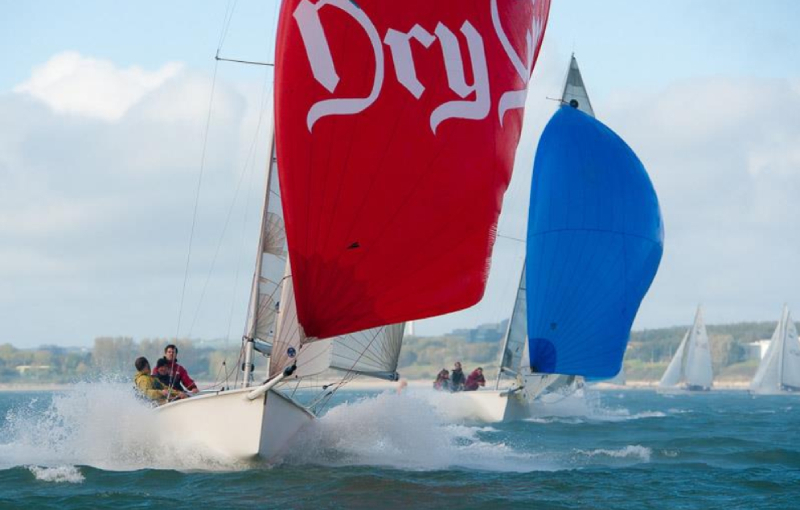 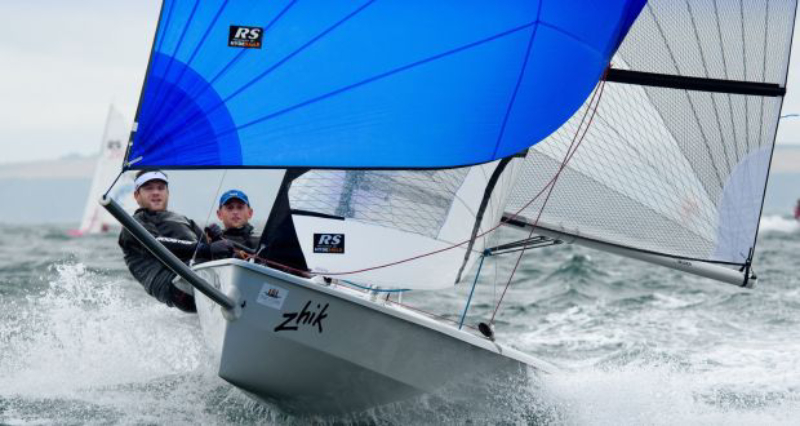 …..and even smaller Alex Barry and Richie Leonard in an RS400 very recently. 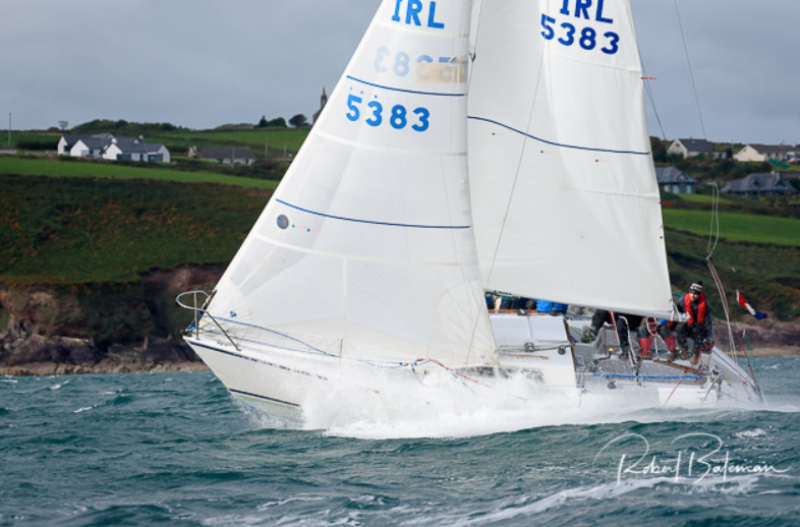 Upwind, downwind, big, small or medium like Sean Hanley’s Luas which here is beating out the harbour near the Weaver….. 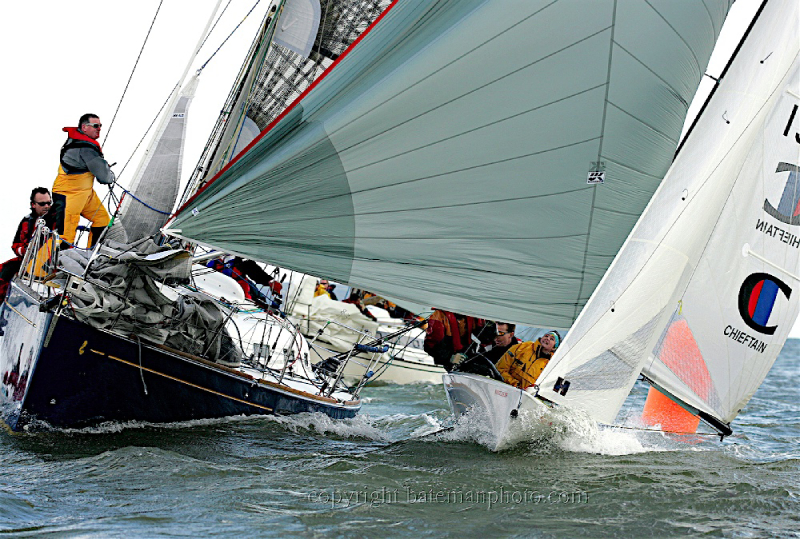 ……our photographer gets to the thick of the action. He is of course Bob Bateman and he has possibly been doing it for longer than any of us might imagine. 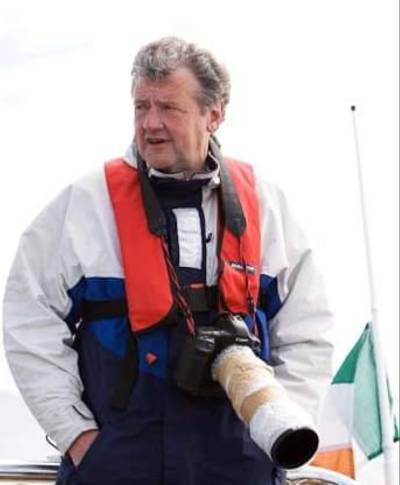 And is still doing it today. We are not allowed divulge ages but with a grandchild sailing 49ers and other adult dinghies we suspect he may have the free travel….. 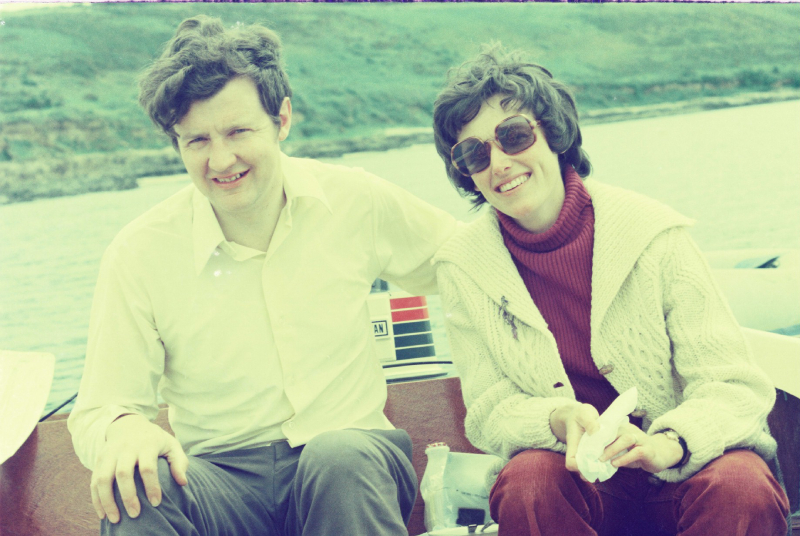 ….but he really up to recently has only been half of the act. Claire and he have done so much to record the life of harbour. Here they are in a boat called Blue Robin which Bob built early on to get afloat for his sailing photography. 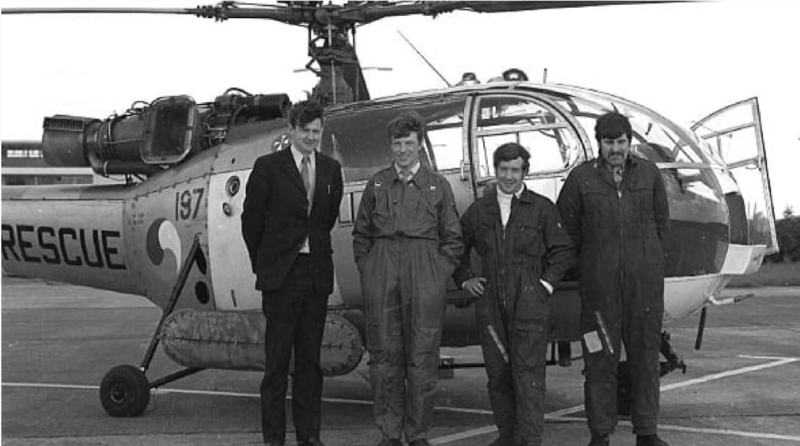 But his commercial career started much earlier than this. One of his clients was Verolme Dockyard…… 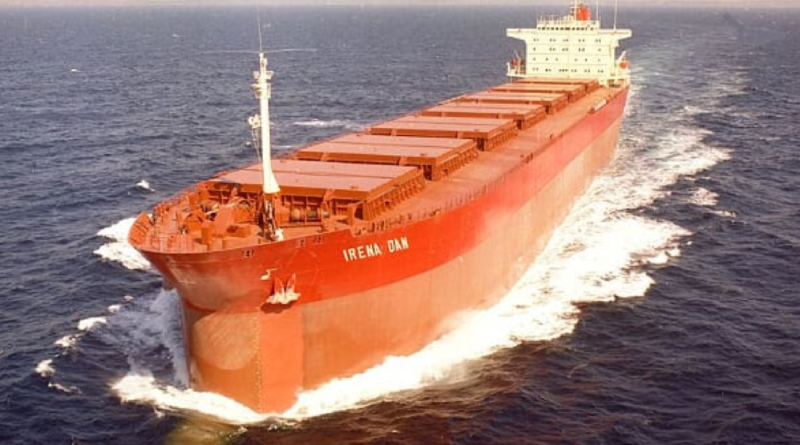 …. and he recorded some rather large boats. At 72,000 tons DWT this is the biggest ship ever to be built in Ireland. The Irena Dan was launched in 1977 in Rushbrooke and here she is, photographed by Bob, at full speed during sea trials near the measured mile off Roberts Head. 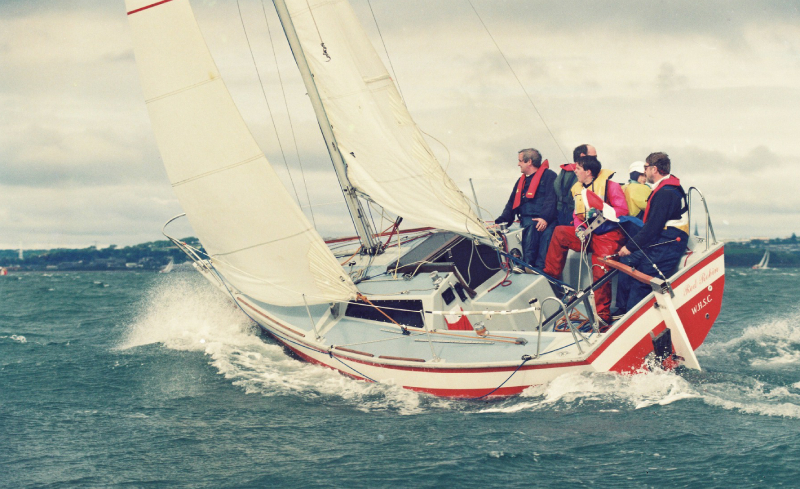 Three photos back we got a glimpse of Bob and Claire’s Blue Robin – here is another kit built boat of theirs, Red Robin, which they built and sailed for many years. She was eventually sold to Peter Murray and Diarmuid Foley who must have sold her on to someone in Waterford judging by the WHSC on her transom in this picture of an October league race. UPDATE: Thanks to the miracle of modern communication we now know lots more about this pic. Here Red Robin is being driven by Vinny O’Shea who at that time sailed mainly out of Dunmore East, hence the WHSC on the transom. The rest of the crew are from Kilkenny via WHSC…David Keneally on main, Davy Brennan in front of him, Jim Langton forward rail and one other. Pic is early ’90s. Vinny sadly passed away in 2014, but he is remembered in the club each year through the perpetual trophy donated by the crew of Yanks $ ffrancs for the best performing overall boat in the October league. 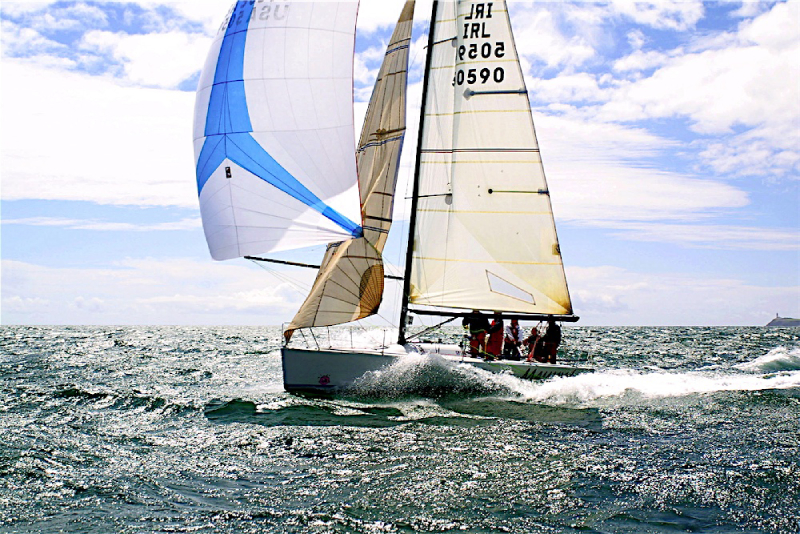 Of course Diarmuid went on to faster boats. Here Bob caught him in the Mumm 30, Mammy, we think it is again near the measured mile off the Robert judging by the presence of the Old Head Lighthouse in the picture. 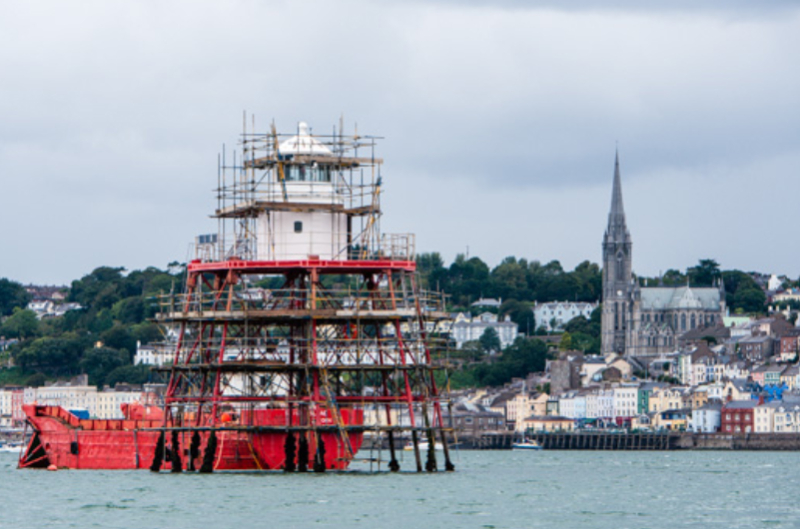 Another familiar lighthouse and the opportunity to pay tribute to Bob’s wife Claire who sadly passed away four years ago. While Bob took the pictures, Claire provided the words. She also was secretary and then chair of the southern branch of the IYA, key to the co-ordination of events along the south coast from Crookhaven to Dunmore East prior to SCORA and ICRA. She also was deeply involved in the organisation of windsurfing nationally in its early days and always worked to ensure co-operation and growth in watersports. The Spit Lighthouse pic links to a typical Claire newsy article on Afloat.ie 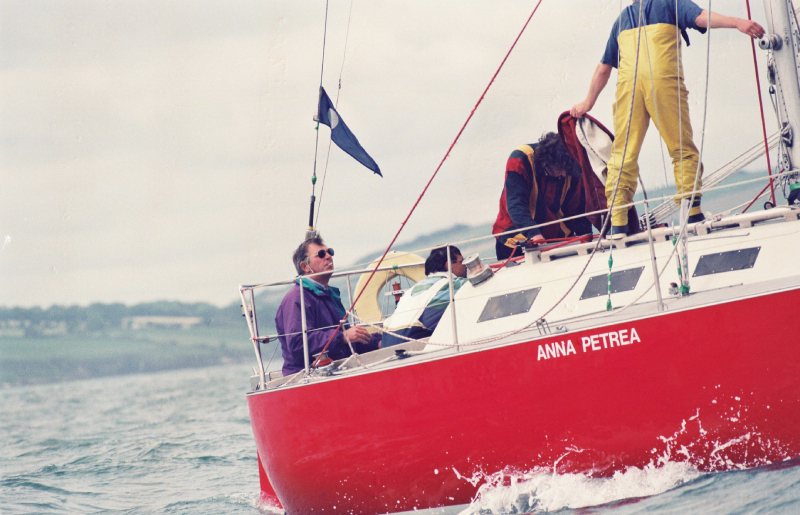 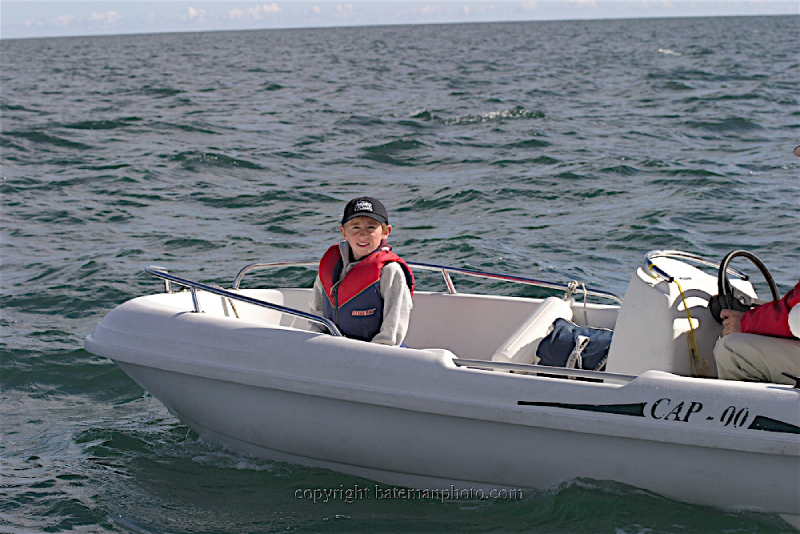 ……recording boats and members through the ages….. 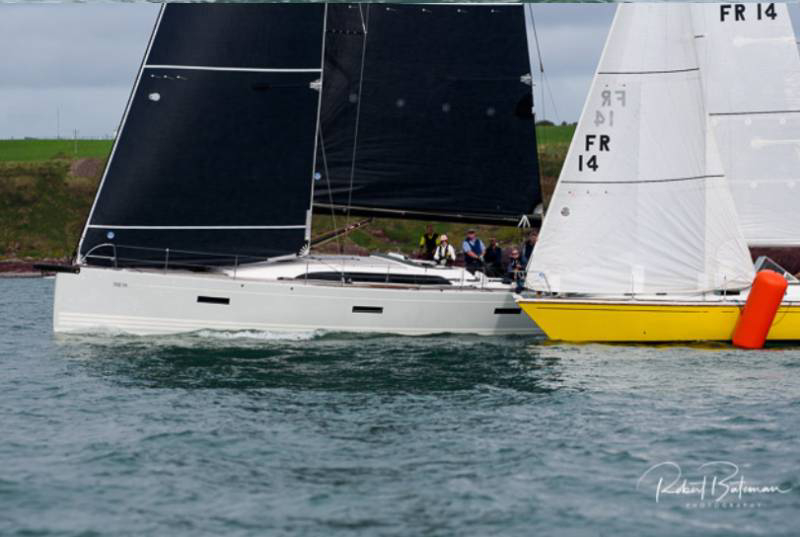 …..and it continues. Bob recorded this interesting “occasion” last October and the wealth of beautiful material he creates makes it hard to finish this post. 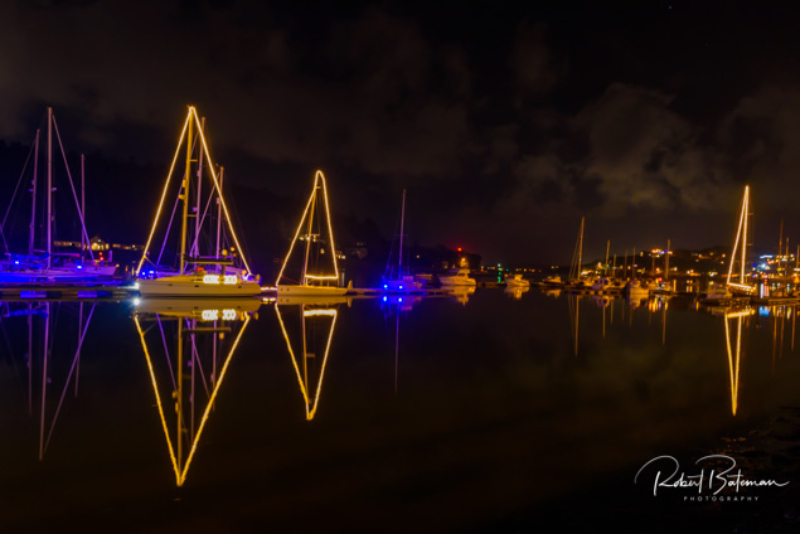 But we have to. Thank you Bob and Claire(RIP).

WayBackWhen is being published as a regular series in the run up to the Cork 300 celebrations next July. The idea is to bring to life the rich history of the Royal Cork through stories and memories from the lifetime of the current membership while being relevant to today’s club. The publication team have been delighted with the level of engagement and help that they have received from members since the first post some eight weeks ago. We are slightly overwhelmed with the volume of material coming our way and promise to try to do it justice over the coming few months.