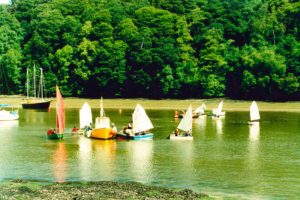 The Club Boats are to most of us like wall paper, rarely getting a second glance. Here we look at some of the hardest working boats in the harbour and we have unearthed a letter and a fishing boat registration to add a little bit more to the knowledge bank. 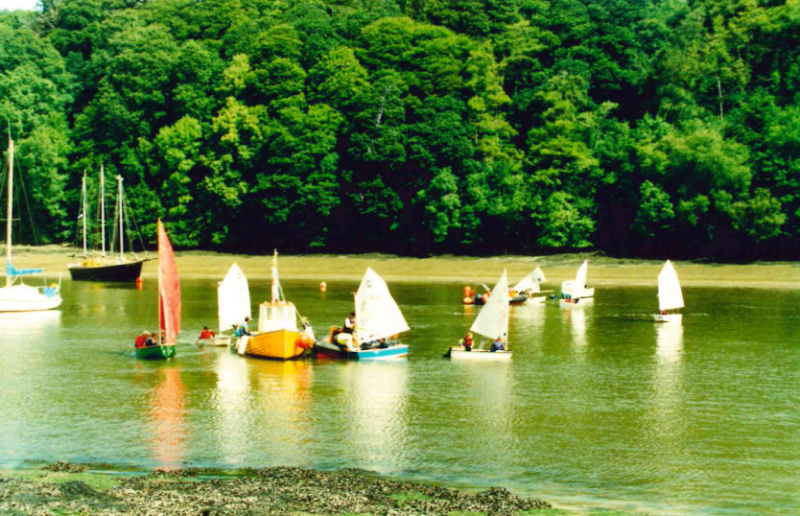 Lets start with Thrombosis. Here she is in a typical scene from the 1990’s doing what she had done every summer since she was originally acquired by the club in 1973. Thousands of young sailors have spent time on her over the years.

She was a bit of princess, changing her look from time to time. This is from the early 2000s. 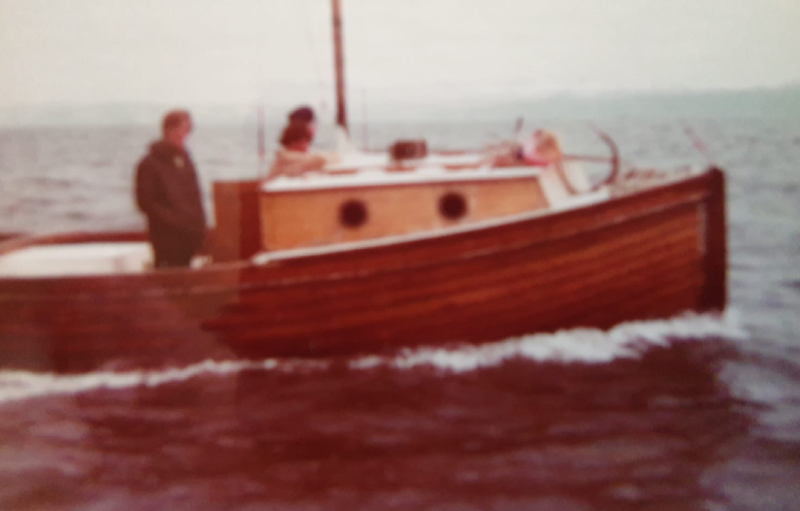 She was varnished originally – we are not sure of the date of this photograph but here she is in her original form. Speaking of forms, below is the application form to register her as a fishing vessel and a letter of sale to club member Charlie Dwyer, both from 1957. From these we can ascertain that she was built in the Isle of Wight in 1949 and that there were good reasons to register a boat for fishing other than to fish! The Crowley mentioned in the letter is Finbarr, father of ex Admiral Peter Crowley, a house builder who happened to built boats in his spare time (see later in this post for more about Sparetime). 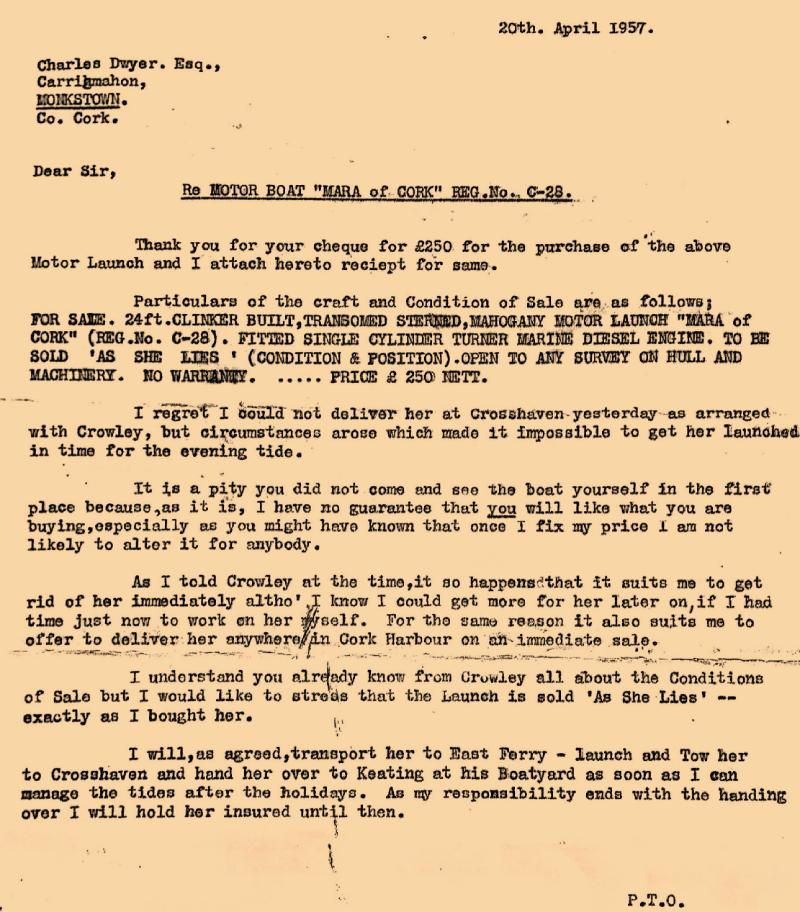 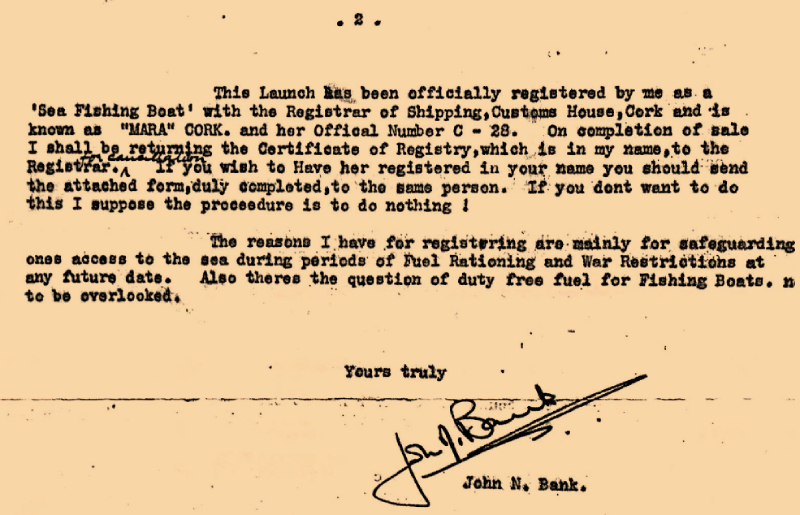 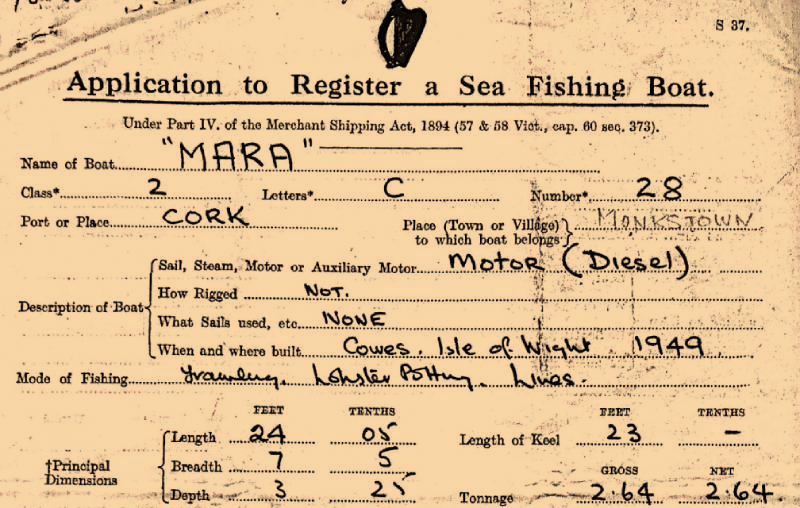 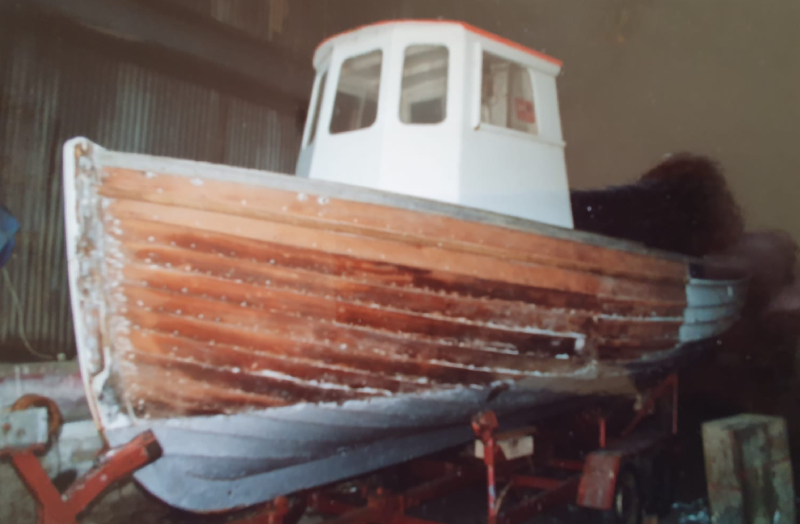 Charlie Dwyer’s brother Pat bought a Union Hall trawler called Hopeful for use in Ardmore around the same time and when she proved unsuitable for those waters the brothers did a boat swap. Hence Mara of Cork went to Waterford – she returned to the harbour as Thrombosis around 1968 – so christened because of the very deep transmitting reverberation from her single cylinder diesel engine. Tom Crosbie had her in his final years up to 1973 after which she was acquired by the club. She was sold out of the club around 2004 and in this picture we see her being stripped back finally losing her white paint as part of her beautiful restoration by Mark Bushe some years later. 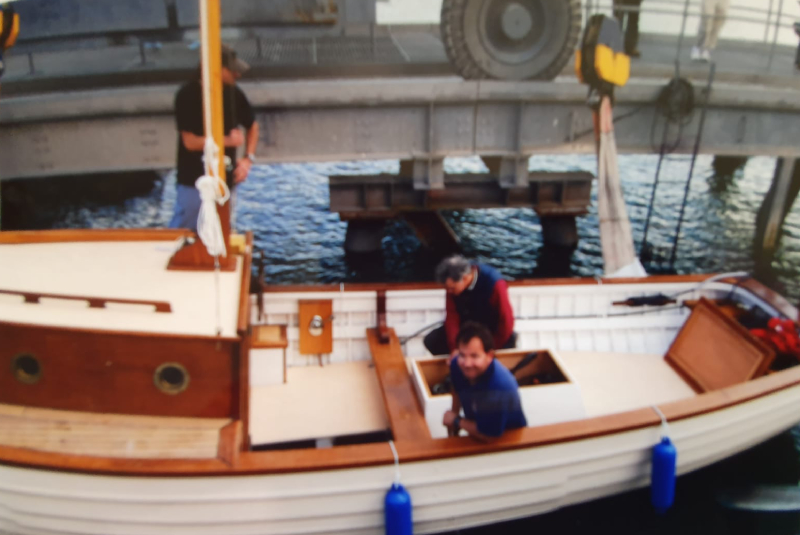 It was Mark’s father, George Bushe, who did all the adaptations to Thrombosis over the years since 1973 that had made her so suitable for club use. One of her biggest feats (with George at the helm) was to tow the 130 foot J Class yacht Velsheda (engineless at the time) as far as the pool off Currabinny pier one summer in the mid ’80s. Here we have her being relaunched in 2007 by Mark. 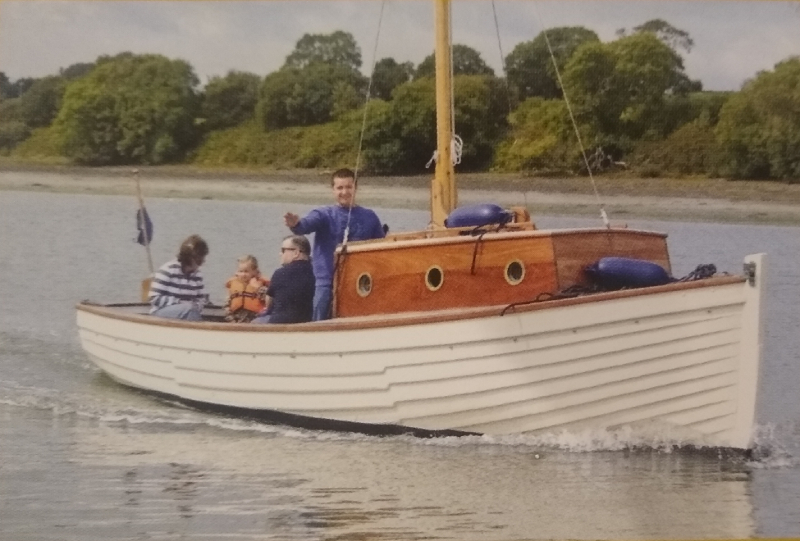 And she is still going strong – now in the Heffernan family and over 70 years old – despite the softer engine sound these days we think it unlikely that she might have another name change anytime soon! 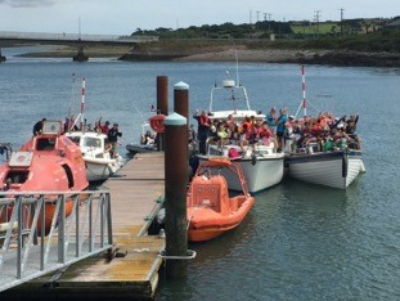 Another great servant of the club has been Adrielle. Seen here on the right she has been in the club fleet since about 1995. This picture of a large contingent of juniors visiting Spike Island in 2016 also includes Thrombosis’s replacement Nemo, a boat of rather easier maneuverability and maintenance demands. 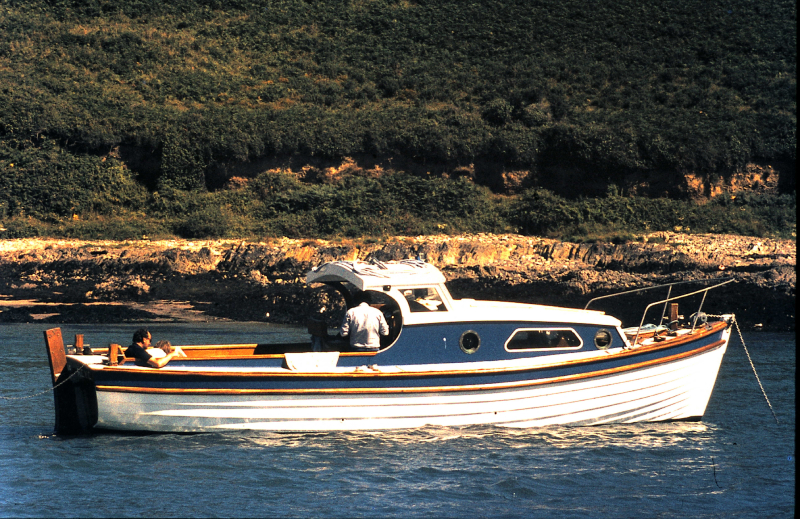 Adrielle in rather more peaceful times. Here she is in the late 1970s off White Bay with her owner, Mick Lane, looking very relaxed. Built in Galway in we believe 1970 by Hickey Boats, unlike Thrombosis she is completely unchanged visually over her 50 years. John Roche, father of another ex Admiral of the same name, had an almost identical sister ship for many years. 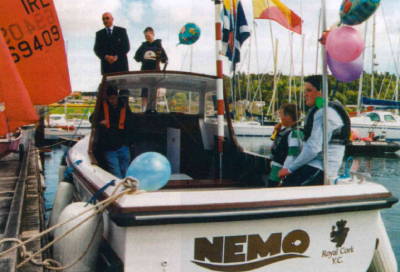 And to complete the picture – here is Peter Crowley, son of the Crowley mentioned in the letter above, at the christening of Nemo in 2005. Peter’s various boats have generally be christened Sparetime, something that goes back to his fathers house building times – apparently employees fed up with being expected to help with his amateur boat building scribbled “in your Sparetime” on his unfinished hull! 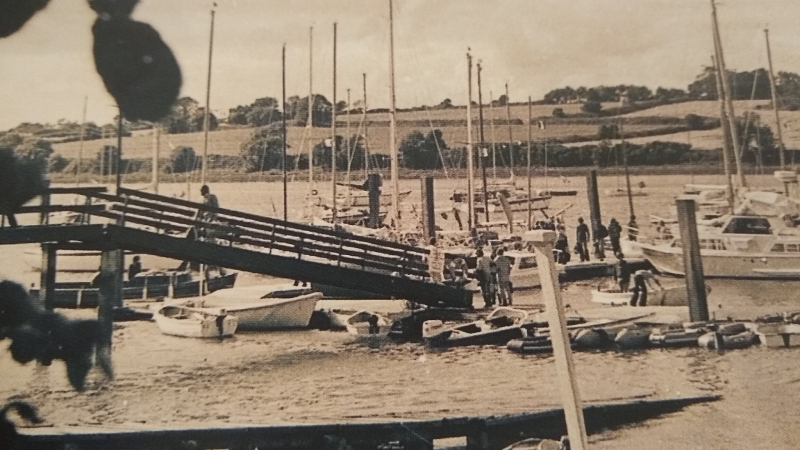 Finally – we must show the ferries. There are three in this picture including the clinker punt which has a 6hp Johnson outboard and was the first ever club ferry. The other two are still in use today, although they look quite different now. The open boats were given a very similar cuddy to Thrombosis by George Bushe, which they sport to this day. 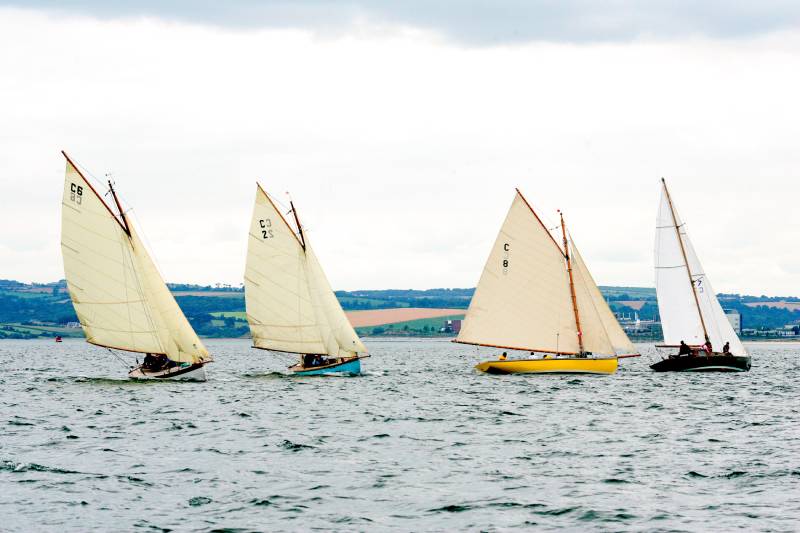 Reminder: This Tuesday March 10th at 8pm in the club Mark Bushe is giving a talk about another of his restoration projects. Seen here in this lovely pic by Bob Bateman are four of the Cork Harbour One Designs, including Elsie, C2, the subject of Mark’s talk. The one Designs have already featured prominently in this series – there is a full article on them in WbW#2, and Maureen, C6, above features strongly in WbW#11. The yellow one is Querida, C8, owned by George Radley and we hope to feature another of his historic boats later in the series. The black boat is Minx, C7, and now restored and only waiting for a new rig and owner as previously reported in WbW#2. So Tuesday – March 10th – 8pm – All welcome.

WayBackWhen is being published as a regular series in the run up to the Cork 300 celebrations next July. The idea is to bring to life the rich history of the Royal Cork through stories and memories from the lifetime of the current membership while being relevant to today’s club. The publication team have been delighted with the level of engagement and help that they have received from members since the first post some seven weeks ago. We are slightly overwhelmed with the volume of material coming our way and promise to try to do it justice over the coming few months.