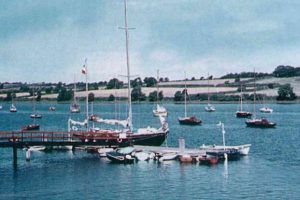 This year we celebrate the 300th anniversary of the foundation of the club in 1720. Much has been recorded and published about the clubs origins and illustrious past. This series looks at the club in the living memory of the current membership.

These pictures were taken in the late 1960’s by John Keane who was steward of the club from 1934 until his death in 1973. They were previously published in the club yearbook of 2003.

They give a lovely idea of what the club and river looked like just prior to the time of the last great celebration on the occasion of the 250th anniversary.

Cadets off the old timber slip at low tide – probably 1968

The tide has come in! Again probably 1968

Signs of change – note the piles ready for new pontoon off the timber slip – the beginnings of the marina development. The line of dinghies in the foreground are National Eighteens – a class that has evolved and to this day remains the backbone of adult dinghy racing in the club.

WayBackWhen is intended to be published as a regular series in the run up to the Cork 300 celebrations next July. The publication team are interested in photographs and articles showing the life of the club in living memory and are inviting submissions at this time.   A number of members have already kindly agreed to write articles on specific subjects the first of which will start appearing shortly – if you have items of interest or a good story that fits the theme please make contact through 0ffice@royalcork.c0m