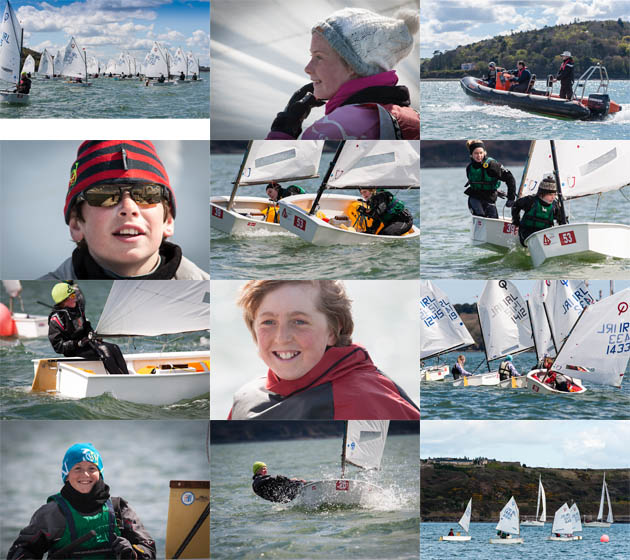 Today (Sat) perfect sailing conditions marked the finale of the Marshall Marine Textiles April League. There was a northerly breeze tempered by the bright sunshine and the cruisers were sent to No. 5 before beating in the harbour to No. 10 and then on to a course that gave them plenty of running, reaching and beating before returning to finish at Grassy.  The day  was described by Batt O’Leary, winner of IHS, as a wonderful and most enjoyable day of sailing of which there have not been too many so far this season.

Also sailing in the harbour were Fevas and some Laser Radials out for practice.  However, the biggest gathering of boats was reserved for the diminutive Optimists, with the beginners group having a ball with their Instructors and other more senior Optimist sailors giving a helping hand.

Also in view of the forthcoming Optimist trials next weekend for the International Team, a group of Optimist Sailors from Kinsale Yacht Club were  working up and joined with a group from TeamX Training from Dublin who were accompanied by their Coach Denis Passke assisted by Séafra Guilfoyle and they later joined in with the regular Royal Cork Optimist sailors racing under Race Officer Michael McCann.

Hopefully today saw the start of the fine weather for the coming sailing season and the new Optimist Class Captain, Frank Thompson,  should be very pleased with the success of the day  and the previous weekend highly successful novice intruductory  session.