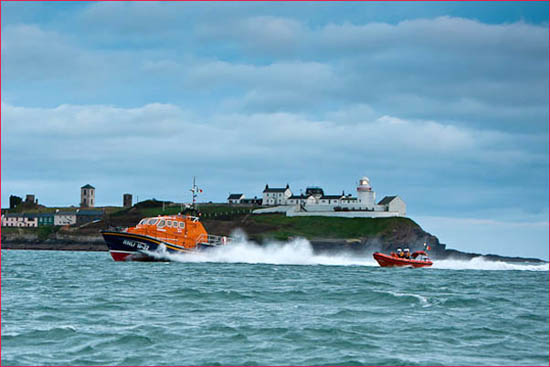 The Royal Cork Yacht Club had a welcome visitor last night with the arrival of Baltimore’s new Tamar Class lifeboat, under Coxswain Kieran Cotter, and only the second such type of vessel to operate in Ireland.  The vessel RNLI 16-22 arrived in Kilmore Quay on Monday and carried out exercises off Ballycotton on Tuesday. The new lifeboat named the Alan Massey was largely funded through a legacy from Mrs. Dorothy  Massey  and has been named in memory of her late brother Alan.

RNLI Governor Peter Crowley in Sparetime took a group of visitors down to watch the exercises and other Royal Cork members went to Roches point to greet the welcome new arrival as darkness was falling.  She later berthed overnight at Royal Cork and is expected to arrive in Baltimore harbour later today where she is expected to receive a tumultuous welcome.  The local schoolchildren have been given a holiday and of course Baltimore is already en fete and packed to the gills with the Optimist IODAI training week with its usual entourage of Optimists, RIBS, families et al prolviding a huge boost for the area.

The new vessel will initially sit on a mooring but a special pod adjacent to the existing boat house is being constructed where she will eventually be able to lie beside the boat house.  At that stage the boat house will be converted for the inshore lifeboat.