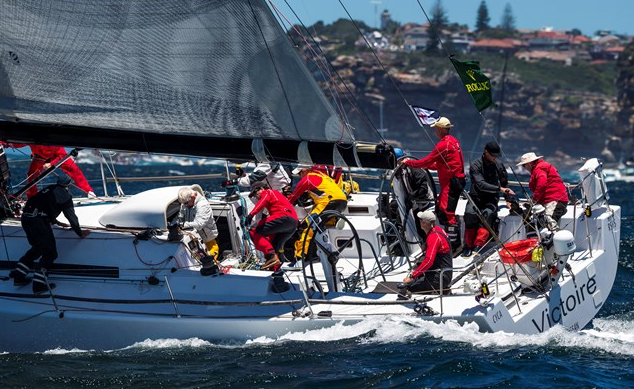 It was a long wait in Hobart wondering if Wild Rose would snatch a last minute win, but at last Victoire skipper, Plastic Surgeon Darryl Hodgkinson, has his hands on the Tattersall’s Cup.

This morning, shortly after Victoire was officially declared the overall winner of the 2013 Rolex Sydney Hobart, Rolex Australia General Manager Patrick Boutellier presented Hodgkinson with a Rolex timepiece and Cruising Yacht Club of Australia Commodore Howard Piggott handed him the most coveted prize in Australian yachting.

He was full of praise for his crew. “I choose very good people, whom I trust. We don’t fly in a lot of expensive people. We sail weekends, Friday nights together. We started off in 2007 on Sydney 38s, then moved up to a 45-footer – and now this,” he said of the canting keeled Cookson 50, formerly known as Jazz.

“Sean Kirkjian, our tactician and helmsman, plays chess – ocean chess – so all the time he wants to know exactly where this boat and that boat is, and what they’re doing.

“The black boat Varuna (Jen’s Kellinghusen’s Ker 51 from Germany) was the one we watched most closely, because she’s fast, so we knew if we could keep matching her we knew we were doing OK in the fleet.”

By ocean racing standards, these days Hodgkinson and his mates have done it all on a very modest budget.

“We’re the least funded in this group. In IRC you’ve got $5 million boats that you’re racing against, so, yes, it does give you a special boost to be able to compete against better  financed boats.

“We race within our means, but I never do anything that would compromise the boat. Some think ‘It’s probably alright, we’ll repair that next year’, but we don’t do that. When you come to a Hobart you don’t do that, you want it perfect.

If there was a weakness in Victoire’s preparation for the Hobart it was for heavy weather. They took her to races up and down the coast searching for big winds to test themselves and the new boat, and found none. Perhaps that accounts for the spectacular Chinese gybe they performed about 100 miles into the race.

“Our one dumb decision was not to take the big ‘chute down earlier. We talked about it for two or three hours,” he said. But the boat was flying, Hodginson and his crew were at the back of the boat, perched on the rail, having a ball, high above the rushing water, right up to the moment the spinnaker took control and the boat broached beneath the big sail. Suddenly, Hodgkinson wasn’t above the water, he was in it as the windward rail became the leeward rail. “Once the boat tipped over and we had the Chinese the decision was made,” he joked.

“Fortunately we had some smart people who knew what to do with the (canting) keel, because, with it out to one side, it’s actually holding you over instead of righting the boat like a fixed keel,” he said.

“There’s nothing to bring you back up. They pressed the button, the keel went over to the other side, it brought us up, someone dragged me into the centre of the boat, the ‘chute came down and then bang, we just snapped out the spinnaker staysail and we were off again.”

It wasn’t all so hectic, though. “Coming across Bass Strait it was crystal clear and there was a light breeze. We were looking up at the stars and saying,’this is heaven’, knowing it would turn into hell soon.” Sure enough, the wind and seas kicked in as they rocketed down the Tasmanian coast towards Hobart and eventual victory.

“Chris Bull (Victoire’s former owner, who raced her as Jazz) has been so supportive. He said to me that she’d come second twice and this was her year.

“She should have won a couple of times, but the wind dropped out. This time it held.”
Victoir