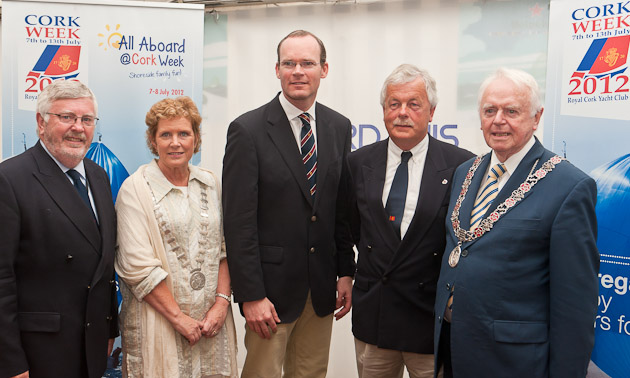 Tonight’s Official Opening of Cork Week 2012 took place in a mood of palpable optimism and with the expectancy of a wonderful week ahead.  The buoyant  mood had been set and the expectancy raised to even greater heights by the huge success of the Saturday and Sunday All Aboard @ Cork Week  open days at the Royal Cork Yacht Club that far exceeded  all expectations and resulted in the club being visited by over a thousand members of the public over the two days. It was a phenomenal experience for all involved and great credit must go to all concerned and in particular to the Cork Week Chairman, Pat Lyons, who mustn’t have slept for six months at least.

The Official Opening that nearly didn’t happen, but that’s a story for the end of this paragraph, was performed by one of our own members, the Minister for Agriculture, Food and the Marine, Simon Coveney, who received a rapturous welcome.  The Minister did indeed deliver a splendid speech that was both uplifting and encouraging.  He told us what it felt like to remember being in the club as a child of five years of age and never would have thought in his wildest dreams he would be coming back as Minister for the Marine. He referred to the importance of the loyal sponsors who have remained with the event and named them all, in particular he spoke of the importance of the support from Fáilte Ireland with the publicity garnered by the event. He told of the huge work put in by Pat Lyons, Cork Week Chairman and Admiral Peter Deasy, and was full of admiration for the effort put in by the staff and particular attention was paid to the volunteer input by the club members. He also thanked the efforts put in by the overseas visitors who had travelled to attend and the huge home support. The Minister was so enthused and obviously so much at home in his own club he was utterly relaxed and the enthusiastic audience responded with their applause.  In fact, he was so relaxed he was about to leave the podium when he suddenly remembered he had come to open Cork Week and hadn’t officially done so and returned again to the podium to loud cheers from the assembled throng as he declared the event officially open.

It was very pleasing to note the attendance of so many Royal Cork former Admirals at the Official Opening Amongst these were Bill Walsh, who sailed Coral in the first ever Cork week in 1978, Tony O’Connor, Paddy McGlade, Anthony O’Leary, Bill O’Mahony and last but certainly not least former Admiral T.E. Crosbie, who, while we were waiting for the Official Opening to take place, regaled your scribe in his own inimitable style with wonderful tales going back to 1938 when the club was the Royal Munster Yacht Club. One little snippet goes as follows: At that time the ladies were not members, and his mother told him about their experiences in that period. It was customary then for the ladies to row the gentlemen out to the One Designs and then to return to the club to await their return. At the time of course there were no conveniences for the ladies and any lady in need of same would be escorted by a gentleman who would ensure her privacy and safe return to her companions!   I also learned that it was at this time Norbert Murphy of Cork Distillery introduced Cork Dry Gin which was favourably looked upon by the ladies and is still so to this day.  Now in his eighty second year former Admiral Crosbie will tomorrow (Monday) compete in Cork Week helming his well known ‘No Excuse’.

So on that note I return to Cork Week 2012 and wish all competitors and officials an enjoyable week with safe sailing and great competition.