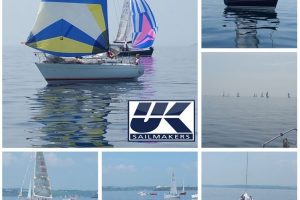 It was one of those days on the water that will last in the memory for a very long time. Glorious sunshine, a bit of heat and a light sea breeze. PRO Richard Leonard and his able assistant Sean Dunphy, brought the fleet outside the harbour for the  annual ‘McWilliam Series’. A lack of wind warranted a postponement until 13.00hrs. A gentle 6kts settled in from 150 direction allowing the fleet to get in a windward/leeward course for race one. Class 1 completed three rounds while Class’ 2 & 3 completed two rounds of the ‘Laid Course’. The wind shifted West a little for the second race which consisted of a beat and run then tight reach to E2, a run in the harbour to ‘Dognose’ and a fetch to the finish at Cage.