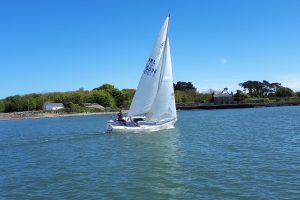 On Thursday evening, 24th May, the GSK wind turbine was rotating very, very slowly.  DePuy’s turbine was sulking – it had stopped rotating and turned away. Maybe some of the crews felt like doing that too, as they motored out beyond Currabinny. After a glorious morning of bright sunshine and good breeze, the wind had dropped to a glassy calm, the clouds had gathered and it was dripping rain. At least it was not cold.

Race officers Barry Rose and Eoin Clayton were not so easily deterred. They found four to five knots of south easterly in the channel. They set the starting line off Ram’s Head and a course, which had a beat to No 3 buoy, halfway to Roches Point, a run back to the outer distance mark, and two rounds. In the face of such determination, the rain stopped.

Notice of race for Union Chandlery June IHS League.
WIN TICKETS FOR 2 TO THE VOLVO OCEAN RACE FINAL IN THE HAGUE