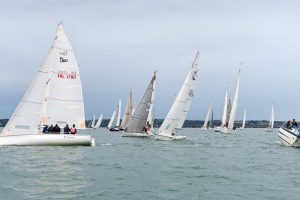 Glorious sunshine had the crews reaching for the factor 50+ sun screen before the start of the second race of the UK Sailmakers May League on Thursday 10th May. However, a cool fifteen knots from the south had everyone reaching for full waterproofs – it is not summer yet. Race officers Barry Rose and Eoin Clayton set up their starting line at Corkbeg . There was a single all-in start. With the fleet of 16 boats converging on the committee boat end of the starting line, aided by the outgoing tide, it was no surprise that there was an individual recall.
After the start, the fleet spread out across the channel on the beat to buoy W1, under Weaver’s Point. It was a great sight to see so many boats so early in the season. The tide against wind chop gave a bit of an advantage to the larger boats. Nieulargo (Denis Murphy) rounded W1 first, followed by Coracle IV (Kieran Collins). Ellida (Ria Lyden) was third around with Club 1720 (Grattan Roberts Jnr) and 5 Star, Dara O’Shea’s new J70, following close behind. On the spinnaker run in to buoy no 7, south of the refinery Jetty, Club 1720 and 5 Star were very fast, gybing off and on with their asymmetric spinnakers. 5 Star overtook Ellida and Club 1720 to round No 7 in third place, behind Nieulargo and Coracle IV.
One long and one short tack took the boats to the Cage buoy, under Camden. There was no catching Nieulargo and Coracle IV, but Ellida’s longer waterline length took her past 5 Star. Club 1720 rounded fifth and Tux (Mary O’Keefe) rounded sixth. Another fast spinnaker broad reach to No 14, off the refinery jetty, saw the leading boats holding their positions, while 5 Star, Club 1720 and Ellida exchanges places a few times, with Tux ahead of the rest of the fleet. On the beat back to the finish at Cage buoy, the leading boats held their positions but Ellida squeezed past 5 Star. Club 1720 and Tux finished fifth and sixth.
On corrected time, on Club ECHO handicap, Nieulargo was first, 5 Star second, Ellida third, Luas (Sean Hanley) fourth, Magnet (Kieran and Liz O’Brien) fifth and YouGottaWanna (David Lane and Sinead Enright) sixth.
The IRC handicap gave slightly different results. Nieulargo was first, followed by Ellida, YouGottaWanna, Tux, Cracker (Denis Byrne) and Magnet, in that order.