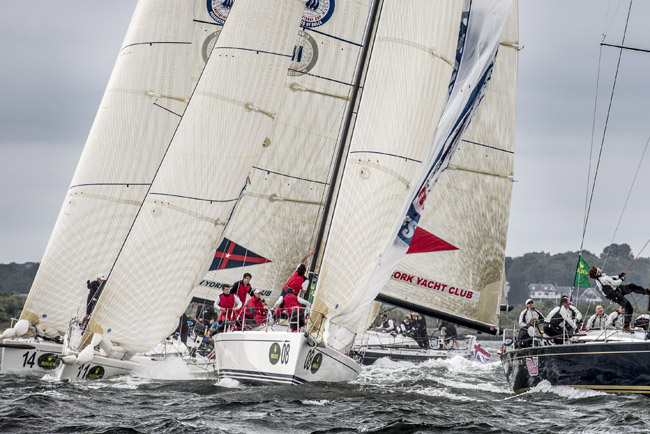 It was an action packed kick off to the third edition of the New York Yacht Club Invitational Cup presented by Rolex as 20 international yacht club teams completed two races on day one of the five-day regatta that will conclude on September 14, 2013.

The expected conditions led the Race Committee to take the fleet north of the Pell Bridge to race between Gould Island and the western shore of Aquidneck Island where the teams – sailing identically equipped Swan 42s – faced breeze in the low teens gusting into the mid-20s and roaring current.  The efforts undertaken by the event organizers over the past year to familiarize the competitors with the Swan 42s, from a training video that contained tips on all aspects of sailing the one-design boats to a Performance Symposium, as well as the commitment to training and preparation made by the competing teams was apparent in the tight racing seen today.

Having only confirmed their participation in the International Cup this past spring, Royal Prince Alfred Yacht Club (Newport, AUS) may have surprised some with their on-the-water performance today.  As one of the nine yacht club teams that are racing in the regatta for the first time, and with only a short window of training time, the team came on strong for the opening day with finishes of 1-5 to take third in the overall standings on six points.

“It was a good start.  We’re really happy,” said RPAYC tactician Murray Gordon of the team’s efforts after only three days of practice in the Swan 42s.  Gordon explained that the team didn’t know how they would fare against everyone else.  “To come off with a win and a fifth, we’re extremely happy.  Back in Sydney we have Sydney 38s with symmetrical spinnakers so we had to do a couple little mods (modifications) to actually turn it into an asymmetrical boat to practice with.  The actual weight to power ratio is very similar [to the Swan 42s].”

Gordon’s goal going forward is to remain consistent.  “We’ve heard that if you can stay in the top-five in this regatta you can actually win it.  If we can hold in around the fifth position and every now and again maybe have a good little break, then we’ve got a really good chance. I think during the regatta everyone will have big mistakes; we had a very close call today but were able to knuckle down and get back up.”  Gordon was referring to being OCS in the second race, as were three other boats, and having to restart the race last off the starting line.  “It did not phase them [the team],” continued Gordon.  “They knew we had a job to do and we really knuckled down.  With a few shifts here and there going our way we worked right back up into fifth which we are just over the moon about in the calibre of this fleet.”

The second race of the day was won by the team representing Japan Sailing Federation, skippered by Eiichiro Hamazaki with tactician Satoshi Kume.  With a fourth-place finish in race one, the team currently is second in the overall standings with five points.  As the top-finishing non-North American team in the 2011 Invitational Cup, they are looking to convert their previous experience in the event into a win.

Leading the overall standings, on finishes of 2-2 for four points, is the Larchmont Yacht Club team from Long Island Sound. “The main thing that we focused on was starting in a clear lane and sailing straight, minimizing how much tacking we were doing,” said tactician Cardwell Potts who explained that this was only the sixth day in the boat together for this team which is trying to minimize mistakes and work out small kinks.  “We were over early in the second race, so we were in damage control mode trying to find clear lanes and again trying to sail straight as much as we could.  It got to the point on that run where people were starting to wipe out and we just were very cautious about what we were doing.  Minimizing mistakes and slowly chipping away.”

Racing resumes Wednesday, September 11, with the first race of the day scheduled for 1100 EST when the course location, on Narragansett Bay or Rhode Island Sound, will be determined by the Race Committee based on the day’s conditions.