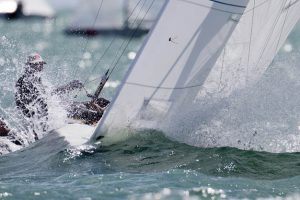 Due to weather conditions all racing for the International Star Class has been cancelled for today and rather surprisingly  for tomorrow Wednesday as well.

Cool nerve and steady hands on the part of O’Leary and Burrows ensured they achieved a good result on Monday at Key Biscayne, Florida.  They rounded the top mark in 30th position but fought back well to 8th position having battled a big wind shift on the first upwind leg.  Nicholas O’Leary and Rodney Hagebols also sailing at the event for the first time  in this Star studded fleet achieved an excellent 18th position in Race 1 and it looks like we will have a very interesting competition to watch with the Stars this week and great to see two Irish boats in the competition. Racing will be held on three separate courses approximately two miles out on Biscayne Bay.

Conditions were near perfect  as 51 teams of Star sailors headed out on Biscayne Bay for the first day of racing in the 85th BACARDI Cup.  Headlining BACARDI Miami Sailing Week (BMSW) presented by EFG Bank, the Stars will race alone through Thursday, March 8, after which they will be joined by the Viper 640, Audi Melges 20, Melges 24 and J/80 classes.  Racing will conclude for all classes on Saturday, March 10.

The Star class has only one race scheduled each day and yesterday’s series opener took place under cloudy skies with a northerly breeze in the mid teens.  The Austrian team of five-time Olympian Hans Spitzauer, sailing with Gerd Habermueller, who had raced in Miami during the Rolex Miami OCR in late January, determined that they wanted to be on the right side of the course today.  As the scoreboard attests, it proved to be a good move right from the start.

“Excellent day of sailing due to the winds, just perfect for the first day of this Bacardi Cup anniversary event!,” said a very happy Spitzauer after racing today.  “We made a really good choice, and extended to take the lead.  Today was a really good race for us, we had a great lead, we were pushed by others but today was our day.”

Finishing second were 2011 US Sailing Team AlphaGraphics (USSTAG) members Andrew Campbell (San Diego, Calif.) and Ian Coleman (Annapolis, Md.), who finished 14th at the Star World Championship in Australia this past December.  Third across the line was the Ukranian team of Arthur Anosov and Vitali Kushnir
followed by 2006 Etchells World Champion and Rolex Yachtsman of the Year Jud Smith (Marblehead, Mass.) who is racing with Brian Fatih (Miami, Fla.).  Fatih, a member of the 2012 USSTAG, will represent the U.S.A. at the 2012 Olympic Regatta in England as crew for Mark Mendelblatt.