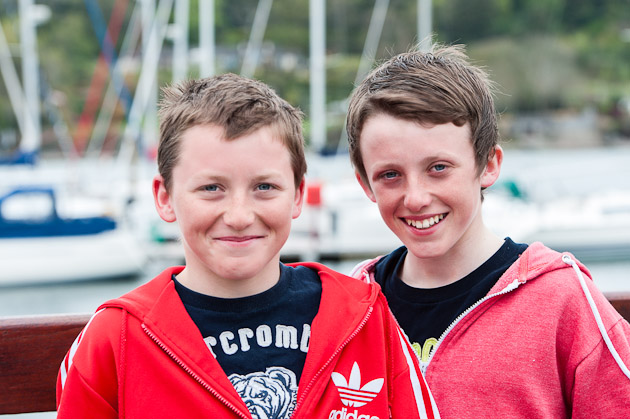 Twins Johnny and Harry Durcan who will vie with one another for top spot tomorrow in the finale  of the Optimist Trials. Picture Robert Bateman

Fifty six Optimist invitees based, on results from National and Regional events during 2012, were invited to participate in trials to select teams to represent Ireland at World and European events.  A selection of an under twelve years of age Development Squad will also be made to compete in Britain.

14 year old twins Johnny and Harry Durcan of the host club, currently lead the fleet on 32 and 43 points respectively .   However, Harry is all set to try to top his brother tomorrow.  Johnny, an all round sailor, has emerged from his Optimist specialist twin’s shadow, to hold first place by 11 points followed by Megan Parker of SSC in third place on 71 points followed in fourth place by her club mate Alix Buckley on 80 points. In fifth place is James McCann of the host club on 81 points.

The weather today (Sun) was 15 to 22 knots of wind  with a cold westerly breeze that tested the fleet especially the under twelves, and congratulations are due to all on having made the trials and putting up a tremendous display of dedicated sailing.