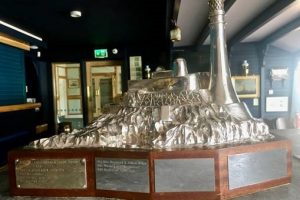 We have two more Trophies on display in the Club. One new, one not so new.

The ICC Fastnet Award has recently been presented to the Royal Cork Yacht Club in recognition of its tricentenary. Admiral Colin Morehead received the trophy on behalf of the Club, with a formal presentation to take place when we hold the Cork300 Gala Dinner. Since it’s inception in 2006, this beautiful Trophy is awarded by the Irish Cruising Club for a range of nautical achievements with some very notable past winners. It is not presented every year which adds to its importance. It is a silver model of the Fastnet Rock and lighthouse on a mahogany base and is truly a striking and lovely Award.

It was first awarded in 2006 to Barry and Cunnane following their amazing feat of sailing a circuit of the Arctic transiting both the Northwest and Northeast passages.

In 2008, Sir Robin Knox Johnston was the selected winner, and then in 2010 it was presented to the 100 year old ex-submariner, Bill King, who was the first Irish sailor to circumnavigate the globe single-handed in his yacht Galway Blazer II which he achieved after several attempts and many adventures including a collision with a whale.

In 2011, it was awarded to a Crosshaven native, Killian Bushe, for both his sailing and boat building achievements. He won the Half Ton Cup as one of the crew sailing Cork built Silver Shamrock, among many other sailing achievements including a circumnavigation. He has moved on from racing to boat building, following a formidable family tradition and been involved in building four successive winners of the Volvo Ocean Race.

The yacht club has also been asked by the ICC to be the custodians of this prestigious Trophy going forward, which is a great honour.

Last week there was a second very welcome addition to our Trophy Cabinets.

The Club received the Crosshaven Regatta Roche Perpetual Trophy, presented by Stanley Roche Esq., in 1957 and last presented in 1972. 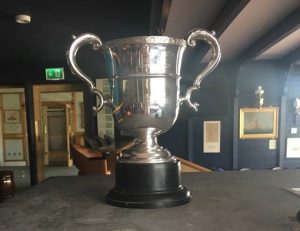 It was first won in 1961 by Olympic sailor J. Clayton Love crewed by Dom Daly, which pair won it again the following year. It has also been won by J.B. Woodward crewed by Jim McCarthy, Harold Cudmore, crewed by Christopher Bruen and lastly in 1971 by Finian Lyden, crewed by Hilary Devlin. The winners attest to the level of skill and determination needed to win this Trophy.

Clayton Love Junior well remembers sailing and winning these races. He told me he sailed a 505 with Dom Daly (father of Ronan O’Gara’s wife Jessica) as his crew, they started from what is now the Hugh Coveney Pier, sailed out into the harbour, around several marks, back into the river, up river to Drakes Pool and down river to the finish.

We are delighted to have this Trophy back where it belongs. The letter accompanying the lost trophy explained with many apologies that “as no one ever asked for it, I didn’t look for it and there it lay”.

The letter also explained that were it not for the restrictions of Covid 19 isolation, he might never have got around to finding it!

We are missing a great number of trophies that have been awarded, taken home by the winners and never returned. We would love to see more of these lost sheep back in the fold. Could we please ask all you successful sailors, to check in odd corners and cupboards for any RCYC trophies that might be lurking there. In our tricentennial year it would be marvelous if some more could be returned home.

Anonymity is absolutely guaranteed  to all “returners”.