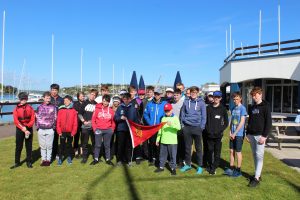 The Topper Southern Championships 2018 were held in the club on the weekend of May 12th/13th and from the beginning of registration to the end of the event , the sun shone on the Royal Cork. There were 47 entries for the competition , of which 24 sailors were from our own Topper fleet so some exciting racing and busy days were a guarantee.

Under the expert eye of our race officer Ciaran McSweeney and safety officer Stephen O Shaughnessy, four races were completed on day one. Conditions were challenging to say the least with the sailors contending with big wind shifts and strong tides and at the end of day one, Hugh O Connor from NYC was leading the field . However with only six points separating the 5th to 13th place, day two promised to be very exciting and this certainly was the case. Two races were completed on day two and the two bullets achieved by Jonathan O Shaughnessy meant that it was a very tight finish but Hugh O Connor held the overall lead and took the Topper Southerns title in the 5.3 fleet. Jonathan O Shaughnessy RCYC finished in 2nd place followed by David Jones RCYC in 3rd.

In the 4.2 fleet, first place went to Christian Houlihan from Blessington S.C , Second place was Fearghal Desmond RCYC/Dingle S.C and third was Zoe Whitford from East Antrim Boat Club. First lady was Ellen Barbour from CAYA/RNIYC. Congratulations to them all and to all the sailors who took part, especially those who were competing in their very first Topper event.

From start to finish, everything ran very smoothly and everybody worked together to ensure a successful and highly enjoyable event. Many thanks to everybody involved in organising the event and especially the parents of the Topper fleet who are always so willing to support and help out. 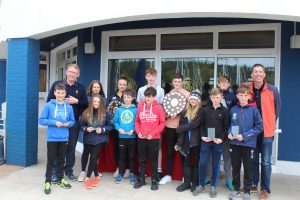