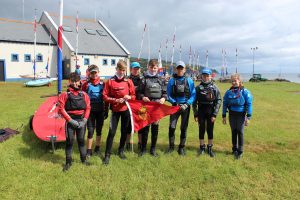 The Topper Northern Championships were held in Cushendall, Co. Antrim on the weekend of June 16th and 17th last. There were 46 sailors in the competition and eight sailors and two Team Dads (Diarmuid and Clayton Kohl)travelled north from RCYC to take part in the event.

Day one started off wet and blustery with very shifty winds, making conditions quite challenging. Three races were completed and all our sailors coped well under the circumstances and the day ended with RCYC sailors in good positions and ready to take it all on again the following day. The weather on day two was bright and breezy and the race officer moved the course in the bay to try to minimise the challenging winds. Another three good races were completed and the final results are as follows:

Of the RCYC Sailors, the results are as follows:

Thanks to everyone involved in the event and we were very proud of our sailors who travelled such a long distance and did so well.

The next event in the calendar is the Irish Nationals in Wexford on July 6th – 8th and we look forward to another good representation from the RCYC Topper fleet at this event.