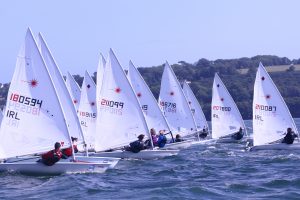 The annual “open” Topper and Laser Frostbite League commenced last Sunday in chilly but bright conditions with fifty five dinghies competing.  There was great support from Kinsale Yacht Club who joined the Royal Cork contingent on the water under the watchful eye of Ciaran McSweeney, PRO on the day.

Four races were completed on the Curlane Bank in west/northwesterly breeze of 10 to 15 knots and the sailors were very glad to receive cups of hot chocolate as they returned to shore.  The end of the day saw the Club Laser group finish five days of performance coaching over two weekends with coaches Michal Gryglewski, Cian Byrne and Tom McGrath.  The Topper mid term clinic also came to a close after four days with Adam D’Arcy, Eoghan O’Regan and guest coach Alan Ruigrok.

Results can be found here