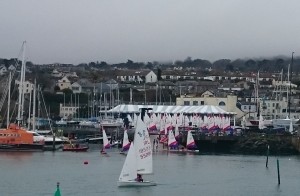 The 2016 Topper Youth Nationals will be remembered for a mix of close racing and significant changes in weather conditions. As always,the Royal Cork was very well represented by nine of our sailors with a number competing at this level for the first time.
Day one was a blow-out with the race management calling it early to allow the sailors take advantage of a ‘day off’ .The result was that many headed to the National Aquatic Centre for some fun.
Sailors launched on schedule Saturday morning in very light winds for the first three races allowing the sailors to settle before race four, where the forecasted heavier wind shifted to the south and strengthened significantly making the race tough and the beat home to Howth after racing even tougher.
Day three continued with the heavier winds making it quite challenging but to be fair to all our sailors they coped very well.
Michael Carroll (RCYC/KYC), excelled on the last day with three bullets out of the three races to finish 1st overall and take the title. Mia Murphy had a very solid 6th place finish, closely followed by Michael’s brother David Carroll finishing 8th.
Sophie Crosbie, Jennifer O’Shaughnessy, Conor Walsh, Ellie Cunnane, Georgia Coveney and Conor Aherne also competed very well in the mixed and sometimes tiring conditions and all can be all very proud of their achievements competing at a national level.
Brian Jones
Topper Class Captain