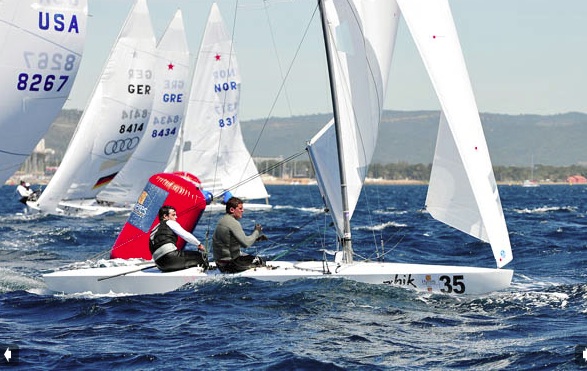 At the International Star Class World Championships today and with discard applied, Britian’s Iain Percy and Andrew Simpson are leading on 15 points having discarded their 17th place result today.   Robert Scheidt and Bruno Prada of Brazil are lying second on 20 points and the Irish duo of O’Leary and Burrows third on 26 points having provisionally discarded their 18th place result today.

Given the strength of the competition, any one of these world class top eight competitors could be on the Podium tomorrow but certainly the top five are looking very strong.

To summarise, it was a day of ups and downs with Scheidt scoring a 5th while Percy came 17th. This 5 points gap does not guarantee the gold to the british duo; they will have to be very careful tomorrow!

At the same time, the Kiwis gave it all and scored a bullet securing their ticket to London. Same for the Dutch who are now 5th and will see themselves in the Olympics!

But, as for the other 2 tickets, it is still pending who is going to make it.

Today’s results give the last 2 tickets to Croatia and Spain with Greece on equal points with the Spanish duo. At the same time, the duo from Austria is still too close..

So, tomorrow it is going to be really tough sailing with no holds barred!!!

The last time Ireland secured a medal at the International Starr Class World Championships was in 2000 when Mark Mansfield crewed by David O’Brien, Publisher of Afloat Magazine, took the Bronze Medal at Annapolis, USA.

Fingers crossed for Peter O’Leary and David Burrow  tomorrow, they will be carrying all our very best wishes. 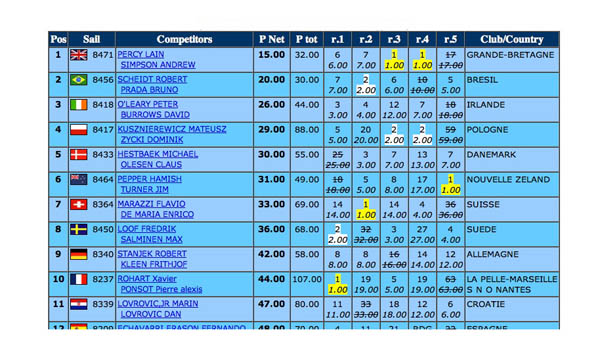 Irish Olympic campaigners Peter O’Leary and David Burrows maintained a strong position in the Star fleet at the World Championships in Hyeres today (Tues). They finished seventh in very light difficult conditions and remain in strong contention in third place overall. They are one point behind the reigning World Champions from Brazil Robert Scheidt and Bruno Prada who are currently in second place overall. Olympic gold medalists Iain Percy and Andrew Simpson of Britain finished in first place and have a strong overall lead.

However, a very real threat to the three current leading competitors is the wily Polish Mateusz Kusznierewicz and his crew Dominik Zycki who have three good finishes and can be expected to move up the leader board if they follow their usual sailing pattern.

Tomorrow (Wed) will be a lay day for the Star Class. It should be stressed that results are provisional and no discard has yet been applied. Racing for the Stars will resume on Thursday when they will return to the course hopefully well rested and refreshed.

Further good news for the Irish Olympic sailing campaign is that James Espey of Ballyholme Yacht Club has secured qualification in the Laser class and so Ireland will compete in four sailing events at Weymouth.