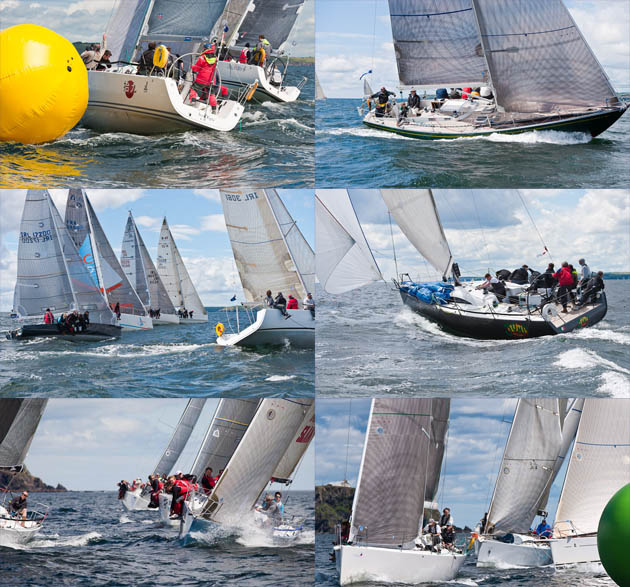 To night I can have no better introduction than the words from Evanna Lyons’ Live Blog on the Cork Week site today and I quote “Its been a wild and exciting day here, we have had some serious wind shifts, sunshine and protests but above all, spectacular sailing! Two races completed here on the slalom, despite the best efforts of the wind gods to disrupt us and today was the kind of day that makes Cork Week special”. What more upbeat way can one start an article for the day that was in it.

Indeed on the Slalom course it must have been a nightmare for the Race Officers because the wind started from the north west before going due north and of all the courses to try to set in those conditions the Slalom is probably the most difficult. They were patient and efficient and explained on radio what the situation was and when the decision was taken to lay the marks for the second race it was done quickly and there is no doubt that the mark laying boat was “not hanging about”.  On this course one could not but have been impressed with the professionalism of the Tonnerre crew and many of the other crews in that fleet.  Incidentally, I must make mention here that George Kenefick is in fact on board as I accidentally omitted his name in Monday’s report. To hear the count down, 3, 2, 1, on board as they reached the weather mark and the military precision with which they rounded was a sight to behold.  In Race two today Antix appeared to be taking the right course up the middle and seemed to be doing well but Jamie McWilliam went up the right hand side of the beat and gained from a lift from the shore and rounded the weather mark in second place.

The other fleets were sailing windward/leeward courses for race one today and the J109s were having a good dingdong battle and with blue skies and sea it was a pleasure to watch.

Of course Cork Week like all good regattas has something for everyone and this was very obvious today particularly in the White Sail fleet where the boats all had an abundance of crews, many of them family members who had obviously come out for the enjoyment, and this is surely one of the major aims of Cork Week to provide enjoyment as well as competition for all.

John Twomey was out preparing for the forthcoming Paralympics and Finbarr Dorgan, who has aspirations for future Paralympic campaigns, was there in his Sonar with his specially modified pedestal from which he steers the boat. Both of these sailors were flying in the conditions.

What a Turn Up for the Books today turned out to be at Cork Week Sailing
Nearly There…..