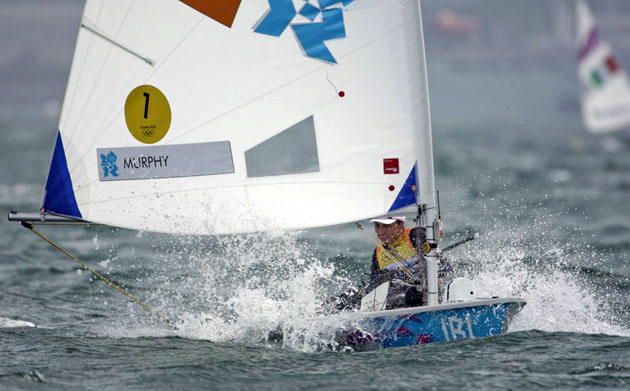 Annalise Murphy proudly displaying the gold Leader of the Fleet sticker on her sail at the start of Race Three of the Laser Radial Fleet at Weymouth today. Pic: onEdition

It was another strong performance by the Irish Olympic sailors today in Weymouth. Annalise Murphy remains at the top of the Laser Radial fleet while two of the other three campaigns have maintained their position in the top 10 of their respective fleets. Today was the second day of racing for the Laser Radial, Laser and 49ers, while the Star had Races Five and Six. The 470 campaign Will commence on Thursday, August 2nd

Annalise Murphy got off to another outstanding start in Race Three of the Laser Radial class proudly bearing the gold Number One emblem on her sail marking her out as the leader in the event. She was first over the start line and held the lead, yet again, for the entire race. Trying very hard to close the gap were Alison Young (GBR) and Evi Van Acker (BEL) but Murphy kept the first place well in hand and maintained a fluctuating lead of up to 70 metres at times. She won the race with an eight second lead.

Race Four saw Murphy off the start line in fifth place but that didn’t deter her for any length of time. Before the fleet reached the first mark, she was back in pole position and making a break for it. She quickly put distance between herself and her nearest rival, Alison Young (GBR), and kept it that way. By mark 8 she had put an incredible 200 metre gap between herself and the rest of the fleet. She finished Race Four with a 30 second lead thus rounding up Day Two with a staggering four wins from four races, the first time such a feat has been achieved by any Irish Olympic sailor. She continues to lead the Laser Radial class heading into Day Three tomorrow (Wed). She has yet to sail six more races in the series, followed by the double points medal race that will take place on Monday, August 6th.  James O’Callaghan, ISA Performance Director commented “Annalise’s performance at her Olympic debut has so far been remarkable. She has spent three years training full-time for this and her knowledge and experience of this venue is obvious. But there is still a long way to go and her competitors will have no intention of letting her off lightly without a battle.  She needs to keep her head down and take every day as it comes”.

Race Three for the Irish 49er duo Ryan Seaton and Matt McGovern didn’t get off to an ideal start this afternoon. The pair were eighteenth off the line and in this position until they rounded the second mark when they fought hard and moved up the fleet to finish in fifteenth.  They put that result behind them and came out guns blazing in Race Four. They were at the top of the fleet for the entire race, alternating between second and third position. Rounding the final mark and on the downwind run to the finish, Nathan Outteridge & Iain Jensenof (AUS) had a huge lead both on Erik Storck and Trevor Moore (USA) and the Irish lads but the Aussies  had the misfortune to capsize at the very last minute. Seaton and McGovern immediately capitalised on the error and moved up one place to finished second. They now maintain their position of sixth overall with a further eleven races to sail followed by the medal race. High Performance Director, O’Callaghan, commented: “The boys showed both their resilience and determination today. They had a quick turnaround between races but they remained focused solely on the job at hand that saw them get their best result so far. Coming in second place is a great achievement so early in the game for them”.

Today was the third day of racing for the Irish Star sailors, Peter O’Leary and David Burrows. They began Race Five toward the back of the fleet but moved up five places to ninth by the final mark. Unfortunately, on the final run they lost two places to finish in eleventh position. There was an individual recall for a number of competitors that were over the line in Race Six and the Irish duo were unlucky enough to be amongst them. The penalty cost them dearly and they finished the race in eleventh place. They finished the day in an overall position of ninth with Iain Percy and Andrew Simpson (GBR) in first and Robert Scheidt and Bruno Prada (BRA) in second. A further four races in the series must still be sailed so it’s all still to play for before the medal race on Sunday, August 5th. “It was a tough day for the guys today and the recall didn’t help but there are still plenty of races left. Nothing has been decided yet” stated O’Callaghan.

James Espey also had his second day of racing today in the Laser class. He had a solid start in his first race but dropped eight places to finish thirty ninth. He had his best start of the Games so far in Race Four where he spent the first half of the race in twelfth place but slipped to finish thirty six.  He has moved up two places to forty overall with a further six races to sail before the top ten in the fleet sail the medal race.

Racing will continue tomorrow for the Laser Radial, 49er and Laser. The Star class will have a rest day and this will give O’Leary and Burrows a chance to take a break to reflect on the racing to date and to recharge their batteries for the two races each day on Thursday and Friday.