The 11th edition of the Transat Jacques Vabre started under grey, drizzling skies in light winds at 1300hrs (local) off Le Havre’s Saint Adresse beach. The 44 boats, 26 Class 40s, six Multi 50s, 10 IMOCA Open 60s and two MOD70s broke the start line in eight knots of W’ly breeze in very choppy seas, heading three miles to the France Info mark before heading down the Channel towards Itajaí, Brazil. The Class 40 fleet are required to make a weather stop in Roscoff, 190 miles from Le Havre to sit out a big low pressure system which would have hit them in the Bay of Biscay at the weekend. They should arrive in Roscoff tomorrow afternoon.

Before heading out to the open sea, the 44 boats had to pass the France Info buoy, three miles from the start line. The order at the buoy was: 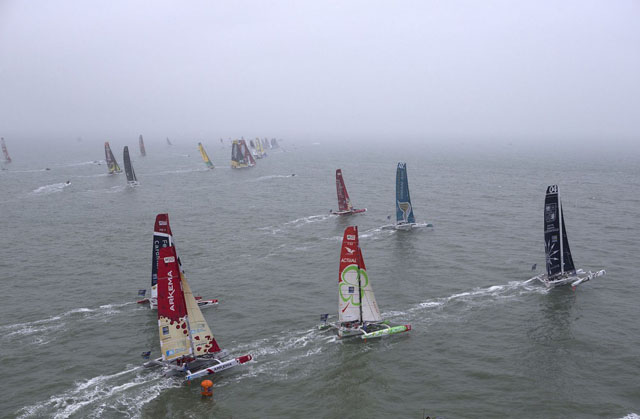 With Class 40 having their weather stop and the MOD 70’s likely to be quick enough to avoid the worst of the weather in the Bay of Biscay – the big multihull duo should be at Finisterre, or near enough, by the time the worst of the weather hits, it looks like the IMOCA Open 60 fleet and the Multi 50’s might bear the brunt of the big winds and seas which are forecast to build almost as soon as they clear Ushant.

First for them is the long, tactical beat out of the Channel, balancing the options of more breeze in the north against a more favourable shift in wind direction arriving first from the south. The advantage is likely to increase for the leaders and so there is considerable pressure to push as hard as possible to start with, but in the knowledge that maximum energies will be needed across the Bay of Biscay. In the very early stages it was the established favourites, Macif, sailed by Michel Desjoyeaux and Francois Gabart – who hold three Vendée Globe wins between them – who lead from the first mark, three miles from the start line, ahead of Marc Guillemot and Pascal Bidégorry on Safran.

The 190 miles leg to Roscoff is more akin to a super short Solitaire du Figaro sprint, offering several key tactical options but with a restart possibly in lighter winds and strong tidal currents, any gains or losses could be magnified after restarting.

“For us it is a race to get south to Finisterre before the next strong system coming in. We should be at Ushant tomorrow morning and Finisterre the following midnight. I think we might not get there before the new wind comes in from the SW so we might have to tack to get around there in a building breeze, probably 35kts but that should be quite short lived and we should get down the Portuguese coast. The boats immediately behind us will get a lot more. For us it does not look like anything extreme. Most of the options are heading out of the Channel, getting the shifts right as we get through, inside Ushant or not and then how much we pull the helm to accelerate towards the North Coast of Spain and try and get through in one, or go for a tack. More and more this morning we are looking at a tack. We will very clearly watch what Edmond de Rothschild do and do it better.!”