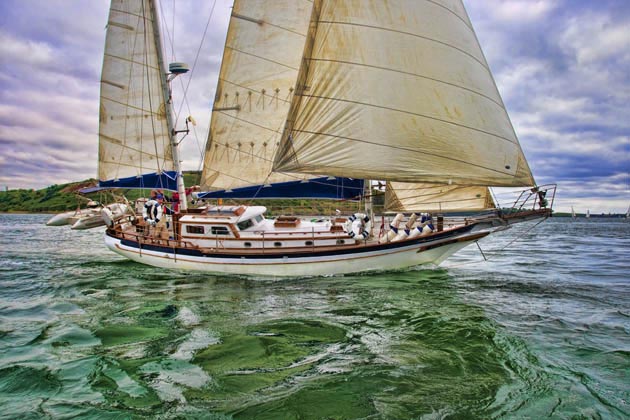 A light southerly breeze greeted the excellent fleet that turned out for the annual Naval Race today.  Adrielle, moored off Cork beg, did the honours as Committee Boat sending the three fleets off on a beat to the mouth of the harbour.  The name of the game was to start as normal on starboard before tacking quickly onto port to get the best of the ebb tide for the beat and thereafter to hug the shore for as long as possible for the run in the harbour.

In the White Sail fleet Eddie English’s Holy Grounder did this to good effect to take the win in White Sail ECHO as did John Hayes in Minstrel in White Sail IRC.  However, the two big ketches, the Naval Service Creidne and the beautiful Anna Emily from the Naval Yacht Squadron struggled somewhat in the light conditions.

Amongst the regular sailing names Vinny O’Shea’s Corby 33 Yanks & Francs took the IRC One title with Leonard Donnery in No Gnomes doing the same in IRC Two.  However, in IRC Three Kieran O’Connell and Graham Marron showed their National 18 wily skills to take the class in Bandit while Kieran Collins in Tambourine had to be content with second with Finbarr Dorgan in No Half Measures taking third.

To day was also an Open Day at the base for Naval Service family and friends with everybody mingling and having a most enjoyable time.  As usual the competitors would like to thank the Naval Service for their courtesy and hospitality that is always very much appreciated as this event is one of the most looked forward to and most enjoyable races of the season.