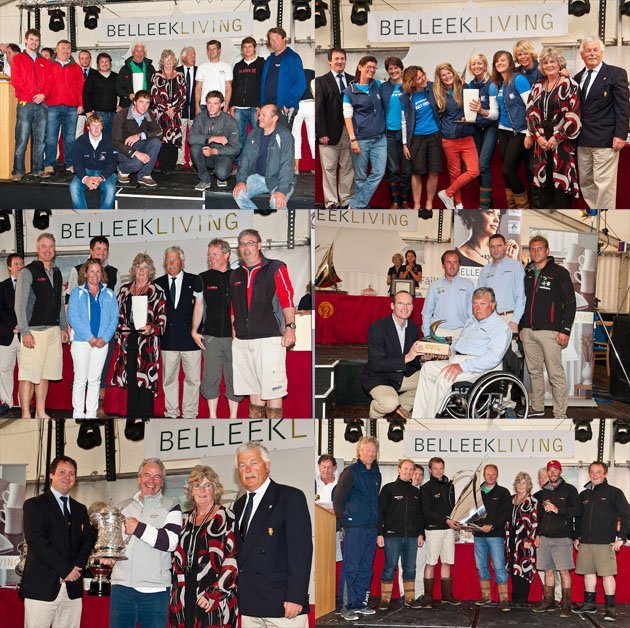 It was a pity about the rain but it did not do anything to dampen the enthusiasm of the sailors for the final day of racing at Cork week. However, there was a delay in starting while awaiting enough tide to bring in a deep draught vessel into the harbour.  Fleet A got a clean start while Fleet B, despite a committee boat on either end of the line, couldn’t identify those over the line so there was a general recall and a second start under a black flag.  Both fleets got a beat into Buoy E2 before getting a run back to OFE 2 and then into the harbour to the Moonduster Mark and then onward to Cobh where they were timed for a special trophy and the winner of this was the local J109, Ian Nagle and Paul O’Malley’s Jelly Baby.

And so on to the ceremonial and prize giving.  Before the prize giving proper a special presentation was made to Peter O’Leary by the Admiral, Peter Deasy, prior to his departure to the London Olympics  later in the month.    Special mention was made of how proud Peter is of his grandparents on both sides and his paternal grandfather, a former Admiral of the Royal Cork Yacht Club, was also present for the occasion.  A relaxed prizegiving then took place with John Crotty as master of ceremonies in flying form. It was a long prizegiving with many, many prizes to be handed out.

Chairman of Cork Week, Pat Lyons thanked the competitors for their attendance and also all the organisers and club volunteers who had given so much  of their time to make the event the success it was and announced a  provisional date for the next event in 2014.

Nearly There…..
Crosbie and Roberts lying third after day one of Four Star Pizza Youth Worlds at Dun Laoghaire