The annual regatta attracts the top student sailors from around the world including Australia, Canada, Japan, the UK and the USA. The UCD students earned the right to represent Ireland having won the Irish Student Yachting National Championships in Dun Laoghaire in March. The highly experienced team will not just be representing UCD but all corners of the island of Ireland. The ten  sailors hail from all over the country including Antrim, Cork, represented by Isabelle Morehead of the Royal Cork Yacht Club, Down, Sligo, Wexford, Wicklow and Westport.

The team was launched last September and has been carrying out an intensive training programme both on and off the water. The team has trained regularly with their sailing coaches Marty O’Leary and Maurice (Prof) O’Connell. They have been training on board an Archebault A35 in Dublin and this is somewhat similar to the 31ft Grande Surprise  yachts that the team are racing in La Rochelle, France. The yacht was on loan to the team for their training program by the owners Joe Balfe and Joe McDonald to whom the team are extremely grateful. 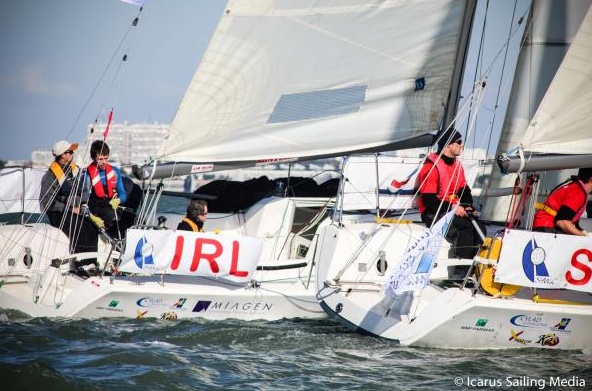 Racing continues through to November 2nd.

Wonderful finale to a great Autumn Regatta and a triumph for the sponsorship of CH Marine.
Laser and 420 – Next weekends Race Details – 3rd/4th Nov