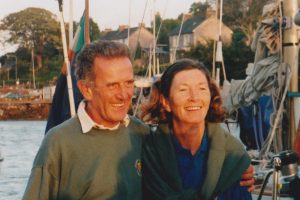 By Communications on April 8, 2020 in Latest

Having circumnagivated the globe with husband Frank 25 years ago, Barbara Fitzgibbon kindly shares some learnings about cocooning and living in close quarters.

A cocoon, according to the dictionary, is a silky case spun by the larvae of many insects for protection as pupae.  And so we over-seventies are encased for our own protection, but much more for the protection of health care workers and younger folk of 69 and under,  so we stay well clear of hospitals and avoid cluttering up the hard-pressed ICUs all around the country.  A highly commendable reason for us to stay hors de combat, one we fully agree to,  but so difficult to submit meekly to. We are only 7 days into the cocooning period and already its beginning to irk.

We feel useless, a potential burden on society, unable to do any of the ordinary everyday things we took for granted like posting a letter, buying our groceries, taking a drive or a walk in the country, visiting the grandchildren and helping our offspring take a break, visiting our local church, or bar, or even -oh luxury! – enjoying an occasional meal out.

As I chaff against this benign imprisonment I am reminded of a period of social distancing that my husband and I self-imposed all of 25 years ago.  We were at the early stages of a voyage around the world, in our 15-meter sailboat Atlantic Islander.  We had left Ireland some 5 months before, relatively inexperienced, but had gained quite a bit of sea knowledge over that time, and had had to endure unexpected hardships like hospitalisation for us both (luckily at different times).  Frank had had to undergo prostate surgery in Madeira where he was incarcerated for 10 days, and two weeks later I had to forgo the Atlantic crossing because of a hand injury sustained in the Canaries which necessitated repatriation and surgery at home.  Frank, barely recovered, carried on with three crew hastily assembled, and reached St Lucia early in December, but my doctor didn’t declare me fit to travel til Christmas Eve. 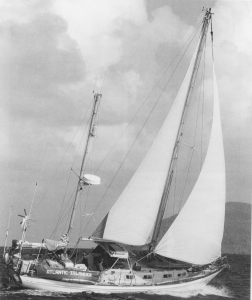 Atlantic Islander which took Barbara and Frank around the globe, pictured here off Bequia, the second largest island in the Grenadines.

Helped by our eldest daughter we sailed to Panama, through the canal and on to the magical Galapagos Islands.  Weakened by his surgery, Frank had contracted dengue fever in St Lucia, and was still not fully recovered, but Rachel had to return to work and so it was just us two once more, with an enormous  journey of 3,000 miles ahead of us, about 2/3 of the distance Frank had completed across the Atlantic in my absence.   It seemed a daunting prospect with neither skipper nor crew fully fit for the challenge.  But to give up our dream of circumnavigating the globe was unthinkable, and so we ventured forth.

This was back in 1996, and we had neither satellite telephone nor e-mail.  For the first six days we didn’t see another boat, then a big trawler from Spain thrilled us with an appearance, and a welcome contact with the outside world.  We caught our first fish on day 7 – enough fresh protein to enliven our diet for three days.  But the water we had filled in Panama turned out to be tainted and undrinkable.  We were obliged to collect rainwater, and thankfully there was no shortage of that, and we had had an ingenious little funnel built into our cockpit shade, so we would scramble with buckets and fill as much as we could to carry us til the next downpour. 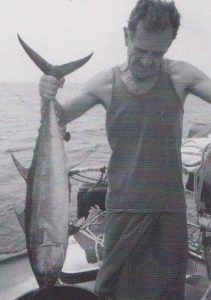 Catch of the day!

We were making this passage at a less than ideal time from the wind point of view, and by week two our progress was depressingly slow, and we were having problems with power generation.  Our self-steering equipment wasn’t functioning and for several days we had to steer by hand day and night, 2 hours on, 2 hours off.  We became tired and tetchy with each other, but had no space to work off our frustrations, no third party to share our problems with.  Finally the wind picked up and our wind vane could take over and give us a much-needed break, but then the calms would return and we were tied to the wheel once again.

I had provisioned enough fresh food for a month, but in the end it took us 36 days to reach Nuku Hiva in the French Marquises islands, and for the last week we were down to a couple of eggs and very diminishing supplies of fruit and vegetables.  We had no refrigeration, as out cool box required too much electricity and our batteries were not retaining charge. Pancakes began to feature on the menu, one egg feeding us both adequately, and the last cabbage was eked out into different forms of slaw.  Frank’s fishing success was minimal, and we became very bored of tinned tuna, tinned beef, tinned ham, although I derived a lot of pleasure in trying to make each dinner seem a bit different from the others!  Meals are such an important part of cocooned days.  We missed our family terribly and had no way to contact them.  We longed for shore and a telephone, and a cold drink.

When we finally sailed into the glorious anchorage at Taiohae, caught up with sailor friends and dinghied ashore, our first task was to rush to the nearest telephone booth and call home.  Then we raced to the main hotel to collect our stash of mail and order two delicious, ice-cold beers.  Simple sublime pleasures. 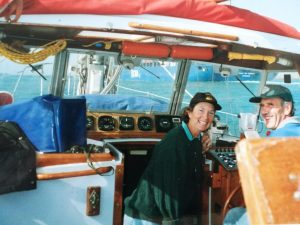 Despite all of the challenges, spirits were high entering the Panama Canal

But back to the present!  Having survived this first week in semi-isolation, we realise how totally fortunate we are to have access to food and medicines (thanks to kind younger neighbours and family who shop on our behalf), to have a constant source of fresh water, a spacious home and sufficient garden to keep ourselves fit and well in and out of doors.  We have What’s App to keep in touch with family and friends around the world, TV and radio and opera and church services beamed into our living room.  This cocooning is a lot less lonely and far more comfortable than those 36 days at sea!  And knowing that we are doing it for the general good enables us to do what is required.  Of course we are sad and anxious for all those who have lost jobs, for the seriously ill and dying, for bereaved families and front-line staff who are overworked and potentially exposed.  But if we face each day one at a time, offer support in whatever way we can, stay cheerful and positive, together we can get through!

Barbara’s account of her circumnavigation, Going West published in 2000, is now available as an e-book