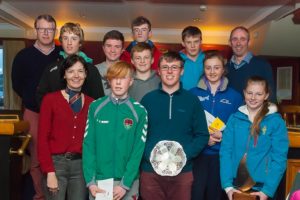 By office on November 30, 2015 in Uncategorized

The event was curtailed to 2 days racing (six races) in total instead of the planned 5 days (and 15 races), all thanks to Storms ‘Abigail’, ‘Barney’ and ‘Clodagh’. A pity, but the 6 races that took place were very competitive.

The Frostbite was first started in 1975 by the fledging Laser Standard Rig fleet. Legend sailor David Gay was the first winner. Other famous sailing names are mentioned on the Cork Silver platter since that time, for example, Vere Ludgate, Mark Mansfield, Mick Wallace, Nick Walsh, Maurice O Connell, Peter O Leary to name but a few.

This year the Topper fleet joined the league to race for the ‘Bill Jones’ memorial trophy.

Rear Admiral Dinghies was on hand to present the prizes.

Well done to all the winners.