Dun Laoghaire this morning (wed)  saw the Route des Princes emerging out of the warming glow of a luminous Irish sunrise .  Yann Guichard’s black and white hulled Spindrift  left their rivals fighting shadows as they led the MOD70 fleet across the finish line of Leg 2 early this Wednesday morning.  Spindrift won the 990 mile stage that started from Lisbon on Sunday afternoon, adding 40 race points to the two bonus points that they landed at the Cascais scoring mark on Sunday evening.  Now the current 2012 MOD70 class champion tops the Route des Princes leader board by 6 points from Sébastien Josse’s crew on Edmund de Rothschild.

From third place when they had a deficit of two miles behind last night’s leader Oman Air-Musandam, Edmund de Rothschild,  Sébastien Josse’s crew glided through to steal second across the line by just by one single boat length – 33 seconds to be exact after two days and 15 hours of racing with just 7 minutes separating first from third.

For Oman Air Musandam’s Irisnman Damien Foxall, Ireland’s top ocean racer, it was  not to be the fairytale homecoming for which a plotline seemed to be  falling into place yesterday morning when Oman Air led around the Fastnet Rock just ahead of Spindrift Racing. 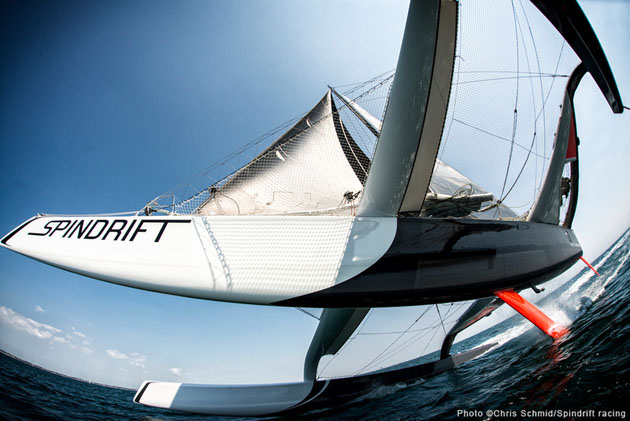 The fleet compressed in lighter winds after the famous rock and on the dock at the National Yacht Club this morning Foxall admitted admitted that perhaps they lost some small distance when they stood too far out into the adverse current at Tuskar Rock – Ireland’” south east corner between Cork and Wexford while their rivals stayed inshore.

Inshore racing for the fleet will commence on Friday for three days which should provide spectacular viewing and on Monday the fleet is scheduled to commence their effort to break the current round Ireland speed record.