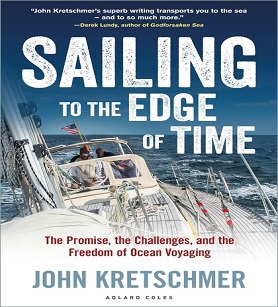 Sailing to the Edge of Time: The Promise, the Challenge and the Freedom of Ocean Voyaging,

John’s Kretschsmer, world renowned cruising sail sailor, will be coming to talk to the Skippers and Members Club. Johns talk will mirror his new book, Sailing to the Edge of Time: The Promise, the Challenge and the Freedom of Ocean Voyaging and will explore the core reasons of why we go to sea. Philosophical and funny, the talk will be filled with stories, some terrifying and others just descriptions of those magical days under sail.

John’s real job, however, is taking people to sea.  His offshore training passages sell out years in advance. With hundreds of thousands of nautical miles under his keel, John’s adventures have taken him several times around the world, with challenging crossings of the Atlantic and the Pacific, a narrow escape from a coup in Yemen, an unlikely deliverance from a coral reef off Belize as well as more serene, introspective passages where trade winds are blowing and stories are flowing. This summer John completed his 26th Atlantic crossing, and the 9th in his boat Quetzal, a Kaufman 47 cutter.  Johns first big voyage was way back in 1983/4 when he sailed a Contessa 32 from New York to San Francisco, doubling Cape Horn to windward.

John has given a lot of talks, in a lot of interesting places over the years, ranging from the Explorer’s Club in NYC last fall, to the Royal Southampton YC in England, to the Chicago, Boston, Stamford and Miami YCs in the States, at all the major shows worldwide and of course, the world’s oldest YC, the Royal Cork. John has appeared on many tv and radio programs, most recently the CBC in Halifax, Canada.

This should prove to be a very insightful and interesting evening. Please note that this Skippers and Members Club event is taking place on Wednesday evening, 3 Oct 18, and not the usual first Tuesday of the month. Coffee and Biscuits will be available during the evening.