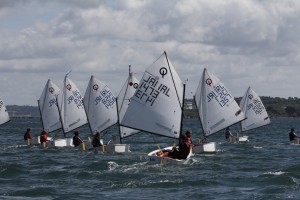 The Skilled for Gold Regatta was held Friday on the Curlane Bank in beautiful sunshine and a stiff breeze.  It was the conclusion of the Club Coaching Programme run over the month of June led by Coach Thomas Chaix.

Twenty three Optimist sailors and 11 mixed dinghies took to the water after the morning briefing.  A four race series was run off for all fleets.  The toppers, laser radial’s, laser 4.7’s and 420 then came ashore as their results were calculated using the Portsmouth Yardstick (PY) handicap system.  The top 6 optimists from the 4 race series went into a medal race.  The winner was Cathal O’Regan, 2nd Rory O’Sullivan, 3rd Emily Whitaker, 4th Conor Horgan, 5th Michael Crosbie and 6th Aoife Byrne.

There was a scheduled lunch break after race 3 for all fleets and some of the older sailors returned to their roots and took “spins” in the oppies.  The junior sailors were more than happy to give the lasers and toppers a try!.  Photos of the day are in the Club Gallery.

The PY results saw James McCann and his crew Bill Staunton take first place in their 420 followed by Richard McGinley – Laser 4.7 and 3rd Eoghan O’Regan in a Laser Radial.  Most improved sailor during the month was Rory O’Sullivan, most tenacious sailor was awarded to Alana Twomey and Jamie Venner won Regatta Fleet.

Many thanks to all the volunteers that supported this event by manning safety boats and the committee Boat.