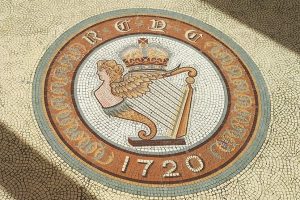 By Communications on November 20, 2020 in Latest

Whilst the SIRIUS Arts Centre is closed to the public they continue offering digital showcases of current exhibitions. Below is the first installment of views and details from ‘Royal Cork Yacht Club, Queenstown/Cobh, 1854-1966’, an exhibition organised to celebrate the three hundred year anniversary of the club. Apologies for the clarity of some imagery. Thank you to our club archivist, Paul McCarthy, for his tireless efforts in putting this exhibition together with the Arts Centre.

This exhibition narrates the story of the Royal Cork Yacht Club through a selection of objects and photographs sourced from institutional and family archives, focusing on the period between 1854 and 1966, when the organisation was based in our building. 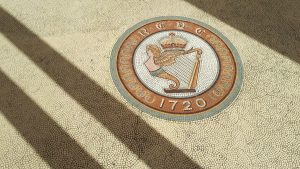 Mosaic on the loggia (balcony) at SIRIUS dating to 1898, featuring the Royal Cork Yacht Club’s emblem. The mosaic was designed by the architect Laurence McDonnell and installed by Denis Creedon of Fermoy.

Private sailing became popular in Cork Harbour in the transition from the seventeenth to the eighteenth century. In 1720, William O’Brien, the 9th Lord Inchiquin, along with five of his friends, founded the Water Club of the Harbour of Cork, the first private boating organisation in the world. The name eventually progressed to better reflect its mission: ‘yacht’ replaced ‘water’, with the prefix ‘Royal’ being added in 1831 after William IV, King of the United Kingdom of Great Britain and Ireland, granted that privilege.

In the early nineteenth century the club settled in Cobh (renamed as Queenstown from 1849 to 1920), and membership continued to grow. In 1853, the club commissioned the distinguished English architect Anthony Salvin to design a building to accommodate its activities. The site evolved to become not only a yachting centre but also a key meeting place for Cork’s elites. By the 1960s, a reduction of activities caused a substantial depletion in the resources needed to maintain the building, and so the club sold it in 1966 and moved to Crosshaven, County Cork.

This exhibition features a variety of items – from images to flags, a wage book to a dinner set – that illustrate the narratives, both political and personal, around the Royal Cork Yacht Club. They acknowledge the significant role the organisation played in Irish society, and also the convoluted relationship between class distinction and sport in Ireland.

This exhibition is organised in collaboration with the Royal Cork Yacht Club and the Cobh Museum. It is partially funded by a grant from the Department of Tourism, Culture, Arts, Gaeltacht, Sport and Media through the Regional Museum Exhibitions Scheme as well as a grant from the Cobh branch of AIB Bank. 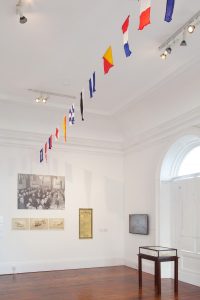 International maritime signal flags are used to communicate between vessels. The principal system of flags and associated codes is the International Code of Signals, which can be used in a number of ways. For example a series of flags can spell out a message, each flag representing a letter, but individual flags also have specific and standard meanings. In yacht and dinghy racing, flags have other meanings; for example the S flag means ‘shortened course’. International Code Flags are also used for ‘Dressing Ship’ or ‘Dressing Overall’ to celebrate a regatta or some other special event. The flags are traditionally flown on the rigging in an inverted V and care must be taken to prevent an inadvertent message being signalled. 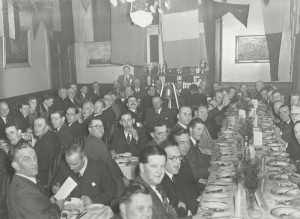 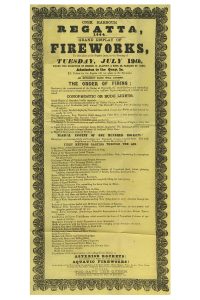 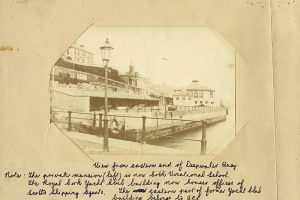 Royal Cork Yacht Club from the west, c. 1890
The deepwater quay, boathouse and boats. The 1898 extension at the western end of the clubhouse had not yet been built. 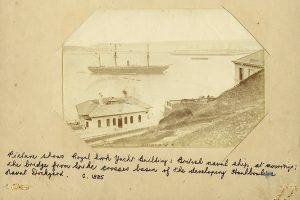 Royal Cork Yacht Club from the east, c. 1900
Cannons on the deepwater quay. 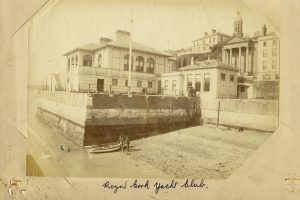 Royal Cork Yacht Club from the north, c. 1885
In the background, the bridge completed in 1867 and used for 25 years to facilitate the movement of convict labour to and from Spike Island to construct the naval dockyard on Haulbowline Island. 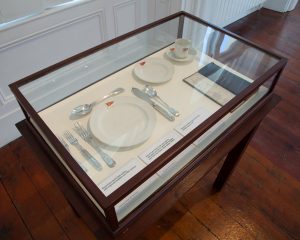 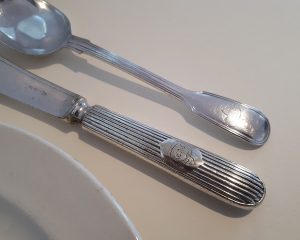 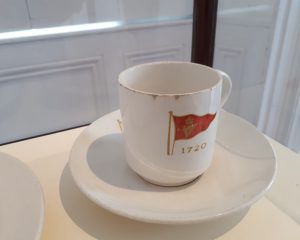 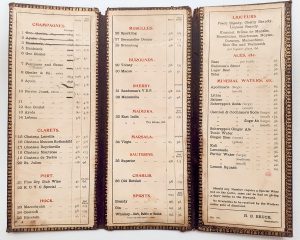 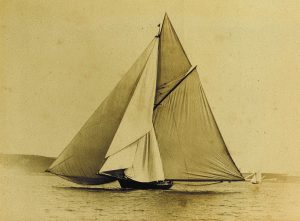 The yacht Valkrie I entering Cork harbour during the race for the Queen’s Cup, 1889
Courtesy of Royal Cork Yacht Club

The Queen’s Cup race, which took place on the 18 June, was hampered by light winds. Although Valkrie I competed well it becalmed near the The Spit Bank Lighthouse close to Cobh when the smaller yacht Vreda sailed past to victory. Roches Point is visible in the background. The owner of the Valkyrie I was Windham Thomas Wyndham-Quin, the fourth Earl of Dunraven, a member of the Royal Cork Yacht Club. He began his successful racing career in 1887 and went on to own two subsequent vessels of the same name. 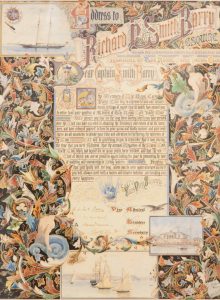 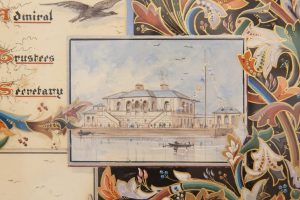 Captain Richard Smith Barry (1823–1894) of Ballyedmond, near Midleton, was Vice Admiral of the Royal Cork Yacht Club between 1857 and 1866, when he was elected as Admiral (his brother James Hugh Smith Barry was Admiral from 1846 to 1856). He served as Admiral until he retired in 1890, when he was presented with this elaborately illustrated address by his fellow members. The yacht depicted in the top left is possibly his schooner Georgina and in the lower left, in front of Haulbowline Island, are some club yachts and possibly the flagship HMS Revenge.

Stay tuned for installment #2 of the SIRIUS exhibition.