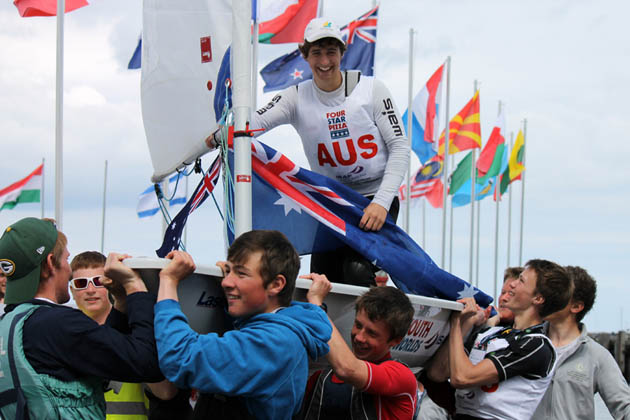 Across the seven different classes the finale was marked by light, conflicting breezes with at least as many title upsets unfolding through the day as there were expected winning scenarios playing out on cue.

Ireland’s 16 year old Laser Radial sailor Finn Lynch achieved a superb result today when he took ninth place in the race and that was good enough to give him a silver medal in the competition, the best Irish result since the championship was first run in Denmark in 1971. All of his chickens came home to roost when two of his nearest rivals match racing for gold at the back of the fleet ensured Lynch had a relatively free run to sail his own race into ninth place and thus securing silver.

Over the last three days Blessington’s Lynch, who races for the National YC, sailed himself from eighth to third to finally secure second overall today on his home waters in the 58 boat fleet

His result exceeds Ireland’s previous highest result, a third place which was achieved in 1996 in the Laser 2 class in Newport by Laura Dillon and Ciara Peelo.

Lynch is a member of the Irish Sailing Academy and attributes some of his success here to the ongoing initiative to maximise training and racing opportunities in mainland Europe.

In the boys 420 class Royal Cork’s Patrick Crosbie and Grattan Roberts sailing in the light conflicting breezes today had a third place finish and, contrary to today’s newspaper reports that their best result was a sixth, in fact they had a superb second place on day one of the event.  This result brought them to 13th overall.  Also finishing in 13th place overall in the girls Laser Radial was Sophie Murphy. In the SL16 fleet Alexander Rumball and Rory McStay finished in 10th place overall.  Also with a 10th overall place top finish in the 29er fleet were Tadgh and Sean Donnelly.

Britain’s haul of two gold and one bronze medal contributed to their taking the Nations Trophy breaking the French monopoly on the team award for the first time since 2008.