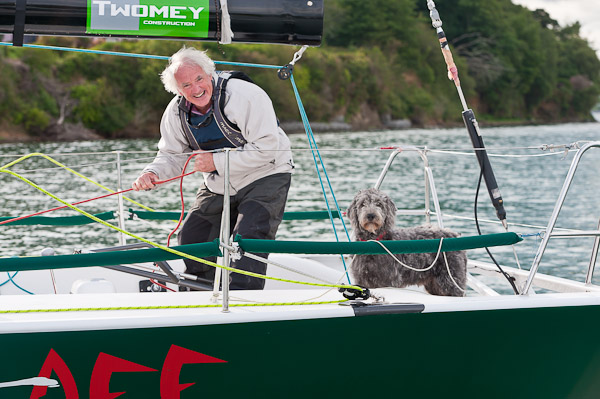 Is Kieran getting outside assistance from Daithí? Pic. Robert Bateman

After a wet start to the day the weather cleared up nicely for Tuesday evening sailing at the club.  On the water there was a large fleet of Optimists and Fevas and across the harbour Adrielle was on station to start the Shorthanded Race.  A wind shift under the clouds meant the start had to be moved closer to Whitegate to give a beat to No. 8 and a reach out to No. 3. However, the wind was not prepared to co-operate and the fleet ended up with a fetch to No. 8 before it decided to die altogether for a while only later to fill in again.

When the wind finally arrived back again it was Seamus Gilroy on Split Point who had stolen a march on all the other boats and by this  time he had established a good lead and when the handicaps were worked out he took first place, a well deserved win on both IRC and ECHO.