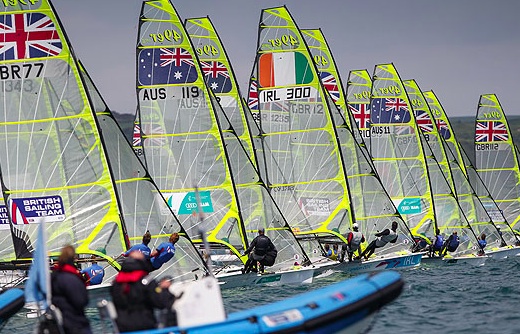 Ryan Seaton and Matt McGovern continued their fine performance in the 49er class and took gold today at the Sail for Gold Regatta in Weymouth.  It was an excellent performance for the pair who, in the process of securing their first international medal, beat numerous World and European medalists. One of the few classes where there was good international competition as numbers in many of the classes were skimpy and were supported in the main by British competitors. Going into today’s medal races they had a six point lead but could have been overtaken by any of the top 10 as three double point races were scheduled. In the end they sealed victory in style posting a third and second respectively in the two races that were sailed and thus captured the top spot.

Meanwhile in the Laser Radial class Ireland had another medalist in the form of Annalise Murphy who took Bronze. She had not been having a good regatta and in spite of the lack of top competition, apart from the Chinese and GBR sailors, Young and Martin, was lucky the wind blew hard today and enabled her to achieve third. Chloe Martin GBR had been having an excellent event and was unlucky to lose out while Alison Young GBR Medalist who had been looking so strong, was unfortunate to have to retire from the competition. This is Murphy’s  third consecutive medal at a EUROSAF Sailing Cup having won gold at both the Italian Olympic Week and Delta Lloyd Regatta in May but it seems  that unless the wind comes well up she has a real battle on her hands.  This was borne out by the outstanding performances particularly of the top four of the U 18 Irish sailors who, with the rest of their contingent, held us enthralled for the duration of the event and posted excellent positions ahead of Annalise Murphy in several races and in fact at several stages could well have expected they would be in with a chance of the bronze medal.

Annalise, who was sailing in the Laser Radial class, was one of five sailors (the others being the U18 Irish) in contention for the bronze medal during this afternoon’s medal race. Her Olympic rival Lijia Xu from China and Dongshuang Zhang, also from China, had already created enough of a points lead to guarantee gold and silver. But the bronze was almost certain for Ireland’s anyway as four of the five sailors vying for that final podium spot were Irish. Having been given the opportunity to sail in the Laser Radial event at this regatta, some of the world’s top youth sailors including ISA Academy members all U18 Finn Lynch, Fionn Lyden and Seafra Guilfoyle showed they can compete with the best of them. The young Irish trio and Annalise battled it out against the UK’s Chloe Martin for the coveted medal in the final race with Annalise ultimately successful to wrest the bronze followed closely by Finn Lynch in second (4th overall) and Fionn Lyden in third (5th overall).

ISA Performance Director James O’Callaghan remarked “Although the event finished on a windy note it was predominantly a light wind event. The Chinese showed their dominance in these conditions but it was pleasing to see Annalise hang in there and still be able to secure a bronze medal in the final results“. Indeed it seems to your scribe the Chinese do not have to bother too much whether it is light or heavy as their weight seems to be such that they can manage in all conditions.

However, for all concerned it would perhaps have been better to see more of the top international sailors present for Sail for Gold but this lack of numbers seems to be a feature so far this year. Perhaps it is a sign of the times or maybe as Rio is still some three years away they have not yet started on their intensive campaigns.  However, as that is expected to be a light wind event it will be even more important that  plenty of experience against sailors from such light wind climates will be obtained.