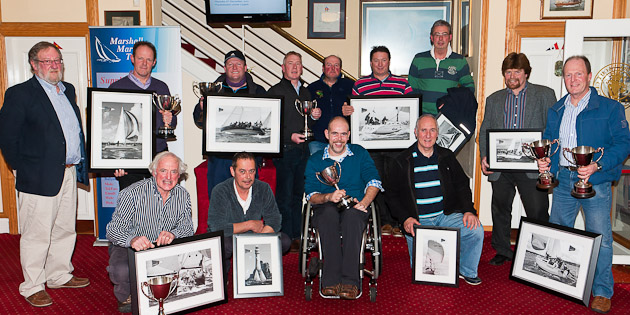 The SCORA AGM and prize giving was very well attended on Friday night last. It was a very positive and constructive meeting with a lot of interesting suggestions and thoughts put forward.

One of the big items for discussion was the Class Bands for 2013.  After a lot of discussion it was put to a vote and agreed that Class Zero should be 1.050 and above, Class One should be1. 049 to 0.975 , Class Two should be 0.974 to 0.916, Class Three should be 0.915 to 0.865 and Class Four should be 0.864  and below. It was also agreed that future class bands break point will be revised from year to year to take account of IRC depreciation with a view to maintaining current class composition.

The question of the modified Quarter Tonners brought a lively discussion with a lot of lively views resulting in a final agreement that they would sail in Class Three.  Should the numbers warrant it, that is a minimum of four boats, they would form their own class receiving their own prizes.

SCORA Commodore, Vinnie O’Shea, made the point that the offshore racing on the east coast is doing very well but attempts at offshore racing down south were not very satisfactory this summer, but of course the appalling weather we had certainly did not help However, he was very keen to try again for 2013 with perhaps thirty to forty mile courses and there was a lot of support for this.  With ICRA in Fenit this year he was exhorting the troops with the dangling of a carrot  of a number of feeder races.  Cove Sailing Club offered to host a weekend championships for Classes Three and Four. The Sovereigns Cup will be in Kinsale in 2013 and all should make an effort to attend.

At the conclusion of the business of the meeting there was a short slideshow presented by Bob and Claire Bateman of the SCORA 2011/2012 season, much enjoyed by all, and was followed by the presentation of prizes and topped off with delicious finger food.  All in all an excellent evening.