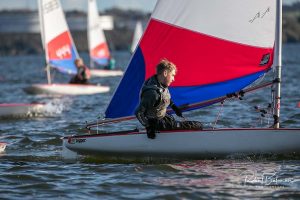 By Communications on January 22, 2022 in Latest

The Royal Cork have two nominations for Afloat Magazine Sailor of the Year 2021. Please support our sailors by voting here today.

Rian Collins  has been cutting a swathe through Irish Topper racing in 2021, maintaining the special reputation of an extended family long associated with Crosshaven sailing and success. He concluded his campaigning on a high in the 38-strong Topper class (the largest and most all-Ireland fleet racing) in the Irish Youth Championship at his home port, recording a very clearcut 12 point overall lead. 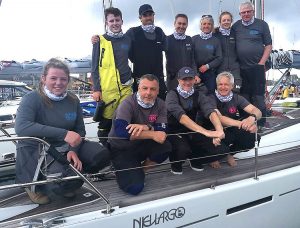 Time was that if a victorious Royal Cork YC vessel returned after “success abroad”, she received a nine-gun salute on arrival from the Club battery. Even though we live in more noise-conscious times, the RCYC can still wheel out a five gun salute when appropriate, but it is used very sparingly. However, on the sunny evening of Monday, June 15th when the Murphy family’s Grand Soleil 40 Nieulargo returned to Crosser fresh from a brilliant overall win in the Dun Laoghaire to Dingle Race, she got the full and richly-deserved treatment from then Admiral Colin Morehead and his members. And though offshore racing is the boat and crew’s speciality, subsequently in the more inshore conditions of the Sovereigns Cup Coastal Division at Kinsale, Nieulargo was still right in the picture to place second overall, making for a remarkably well-balanced month of achievement which was extended well into Autumn when she was declared the ICRA Boat of the Year after winning her class in the RCYC Autumn League.

Local Hosts Needed For 505 Worlds
Sailing Courses – Save The Date