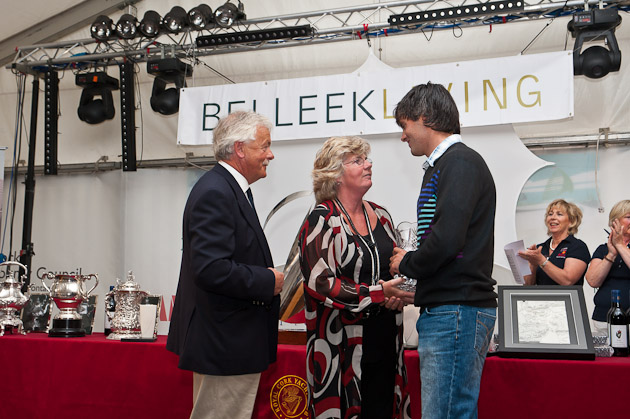 Peter O’Leary receiving a special presentation from Admiral Peter Deasy’s wife, Judy, watched by the Admiral, at the close of Cork Week 2012 and prior to his departure for the London 2012 Olympic Regatta. Picture Robert Bateman

Sixteen Stars will take to the Weymouth and Portland waters on 29 July to start their campaign for London 2012 Olympic glory.

Robert Scheidt and Bruno Prada (BRA) and defending Olympic Champions Iain Percy and Andrew Simpson (GBR) head into the competition as the favourites, but with experience spread across the fleet, upsets can happen.

Scheidt and Prada come into London 2012 having dominated the Star fleet over the last 18 months. The Brazilians have won back to back Star World Champion titles at the 2011 ISAF Worlds in Perth and the 2012 Star Worlds in Hyeres, France and posted an impressive seven straight regatta wins and know how to make it work when it really counts.

At the 2011 ISAF Worlds Percy and Simpson had to pull out after Percy sustained an injury to his back. The British came back stronger at the 2012 Star Worlds, exchanging the lead with the Brazilians. But after a bad penultimate day which saw them finish 17th the title was Scheidt and Prada’s to lose on the final day. The Brazilians kept the British at the back of the fleet with both teams discarding results in the 30s, thus handing the Brazilians their third Star World Championship.The silver medallists behind Percy and Simpson in Beijing 2008, Scheidt and Prada will be gunning for gold this time around.

In a fleet whose athletes already boast Olympic medals into double figures and over 50 Olympic Games appearances amongst them the challenge of youth versus experience could be telling. Polish skipper Matesuz Kusznierewicz is the only other gold medallist which he picked up in the Finn class back in Atlanta 1996. Competing at his second Games in the Star with Dominik Zycki they will be striving for the podium which proved just out of their grasp in China.

The Swedish pairing of Freddie Lööf and Max Salminen combines a wise head with youthful exuberance. Lööf, sailing at his sixth Olympic Games, already has two bronze medals to his name and after just missing out on the gold medal in Beijing teamed up with Salminen, one of the youngest sailors in the fleet at 23, who makes his Olympic debut.

France’s Xavier Rohart will sail at his fifth Olympic Games with his best result coming at Athens 2004 where he won a bronze medal. Sailing alongside him is Pierre Alexis-Ponsot, who will compete at his first Olympic Games, Rohart’s experience could prove vital.

Peter O’Leary and David Burrows will compete in the the Olympic Regatta knowing what it takes to beat their 15 competitors on Olympic waters and having strung up an impressive run of results in 2012 including winning Skandia Sail for Gold in Weymouth and they will be pushing hard for the podium.

The 16-boat Star fleet will commence racing on Weymouth Bay West Course on 29 July at 13:30. The fleet will enjoy a reserve day on 1 August followed by two further days of racing when the top ten will be decided for the Medal Race on 5 August.

At the closing ceremony of Cork Week 2012 on Friday last to mark Peter’s departure for the Olympic Regatta at Weymouth, he was the recipient of a special presentation made to him by Admiral Peter Deasy’s wife, Judy, in recognition of the honour he has brought to Royal Cork Yacht Club,  Baltimore Sailing Club, and indeed to Ireland.